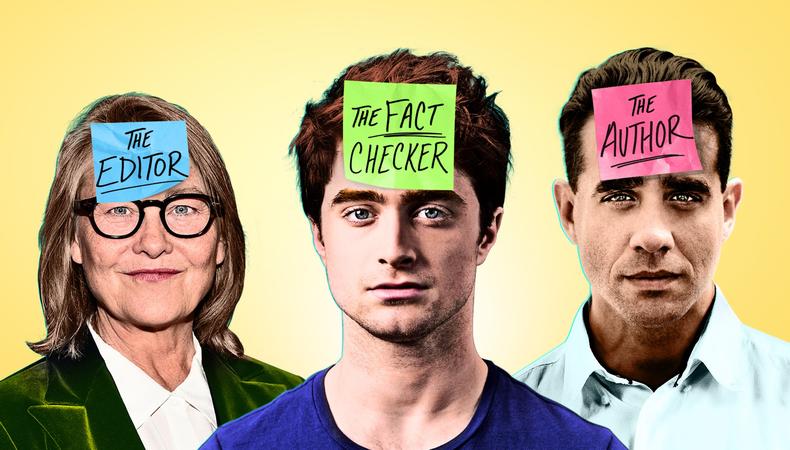 It’s a fact as encouraging as it is disheartening: Broadway is getting its first-ever all-female design team—and it took until 2018.

Leave it to the trailblazing director Leigh Silverman to get the job done. At the helm of the incoming “The Lifespan of a Fact,” opening at Studio 54 Oct. 18, the Tony-nominated director has made history assembling the prescient play’s five designers, all of whom are female-identifying. Backstage spoke with each of them about their experiences breaking into the field, and their advice for aspiring female creatives in theater.

Palmer Hefferan, sound designer:
“The No. 1 thing is, even if you don’t think you check all the qualification boxes for a job, still go for it. I think that men very often apply for things they’re unqualified for, and women are like, ‘I’m missing that thing, so I guess I’ll have to learn that skill set [before I can apply].’ But a lot of things you do learn on the job. Of course you want to present yourself as the most competent, inventive artist as possible, but I’m constantly learning, no matter where I am in my field. And don’t doubt yourself. If you feel like you have some strong skill set but you still need to learn, reach for something that you want. As a woman, that’s the biggest thing.”

Linda Cho, costume designer:
“It’s persistence and not undervaluing yourself. Speak up. These are the things as women in any field that we are conditioned to do: not interrupt, not be intrusive, undervalue ourselves. These are the things—not only backstage in theater, but as a gender, that we need to work on. Just go forward with confidence and look for those opportunities. Know that you are qualified, or become qualified and then be confident about it.”

Mimi Lien, scenic designer:
“When I started, I was willfully ignoring [gender] in a way. Like, I’m gonna do what I’m gonna do, and it shouldn’t be an issue, so I’m not going to make it an issue. There certainly were times where I felt I would’ve been treated differently had I been a male-identified person, but I was like, I’m going to do the best I can, I’m going to have my shit together…. [Female theater-makers should] definitely be tenacious. Don’t give in. I think that’s advice in general in the theater. You sometimes feel like you’re trying to do the impossible, but even so, don’t give in and be tenacious.”

Lucy Mackinnon, projection designer:
“When I first started assisting, I got paid less and I was given lesser credit than other male assistants. I think women’s work is sometimes undervalued, especially when you’re talking about graphic design, animation, fields typically filled by men…. If you have a strong grasp on a certain kind of aesthetic or if you’re an amazing artist, you should trust that you’ll be able to compete in the industry. I’m not sure if this advice is specific to women as much as it’s just an open call for people to try out projection design. The field is still being defined, and I would urge people not to be afraid and to get experience in it—and I hope some of those people choosing to do that are women.”

Jen Schriever, lighting design
“My advice is continually evolving, but I would say, find the person you want to be and try to work with them. For the most part, people—especially people in the arts—want to help others. I talk to young women designers who are now feeling super competitive with their peers because they think, That team doesn’t have a lighting designer yet and they’re probably going to hire a woman and I want it to be me and not my friend. It’s hard to support one another when you’re all fighting for ‘the slot.’ But it’s important to remember there really is room for everybody, we just have to lift each other up…. And you have to fiercely believe in yourself, because so many people are nervous, especially in commercial theater, to trust a new person. If you believe you can do it, of course you can do it.”

Looking for a theater gig? Check out Backstage’s casting notices!

Casey Mink
Casey Mink is the senior staff writer at Backstage. When she's not writing about television, film, or theater, she is definitely somewhere watching it.
END_OF_DOCUMENT_TOKEN_TO_BE_REPLACED