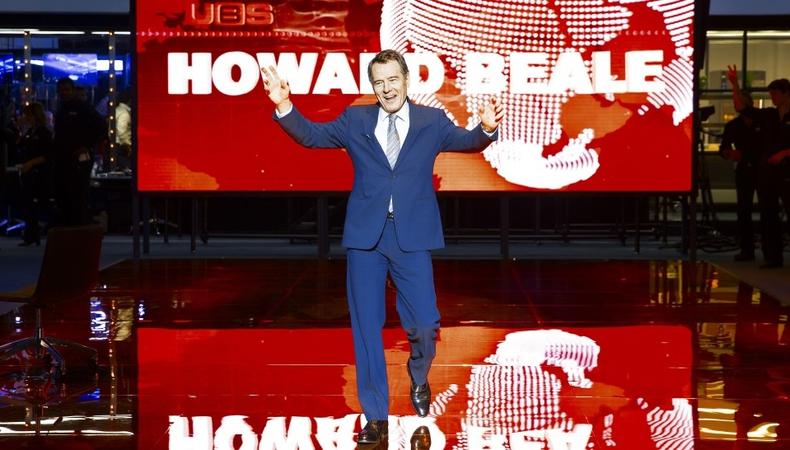 From “Breaking Bad” to Broadway…
Tony and Emmy Award winner Bryan Cranston will return to Broadway in “Network,” reprising the role for which he won a 2018 Olivier Award in London. The drama, an import from the National Theatre, will begin performances at the Cort Theatre Nov. 10, with direction from Tony winner Ivo van Hove. Based on the film of the same name about a newscaster who has a breakdown live on-camera during a broadcast, the piece is adapted for the stage by Tony winner Lee Hall. An official opening is slated for Dec. 6, with additional casting to come.

Sing out, C. Hall.
Another television baddie returning to the stage, “Dexter” star Michael C. Hall will lead the Signature Theatre production of “Thom Pain (based on nothing).” The drama, by Will Eno with direction from Oliver Butler, will begin performances at The Irene Diamond Stage Oct. 23 before officially opening Nov. 11. Depicting a man trying to save his own life, the monologue play will run through Nov. 25.

Tootsie finds her Broadway home.
Though previously-announced as Broadway-bound, they can now call it official: “Tootsie,” the new musical adaptation of the beloved film, has announced its Broadway theater and dates. The Santino Fontana-starrer will arrive at the Marquis Theatre March 29 ahead of an official April 23 opening. Featuring a score by newly-minted Tony winner David Yazbek, direction by Scott Ellis, and book by Robert Horn, the musical will receive an out of town tryout in Chicago this fall before making its way east. Lilli Cooper, Julie Halston, Sarah Stiles, and Michael McGrath round out the cast.

An actor-director prepares.
David Cromer, who just won a 2018 Tony Award for his direction of “The Band’s Visit,” will follow up that achievement by stepping back onto the stage. The actor-director, siding with the former, will join the cast of Kenneth Lonergan’s “The Waverly Gallery,” starring alongside previously-announced stars Lucas Hedges, Joan Allen, Elaine May, and Lonergan alum Michael Cera. Directed by Lila Neugebauer in her Broadway debut, the run begins at the Golden Theatre Sept. 25 and will open officially Oct. 25.

School is back in session—with some new students.
One of the Off-Broadway hits of last season, “School Girls; Or, the African Mean Girls Play” was so rapturously received that it has slated an encore presentation this fall at MCC. Returning for the run, which begins at the Lortel Theatre Oct. 16, will be original cast members MaameYaa Boafo, Paige Gilbert, Zainab Jah, Abena Mensah-Bonsu, Mirirai Sithole, and Myra Lucretia Taylor. This run, helmed by original director Tony winner Rebecca Taichman, will also welcome new actors Latoya Edwards and Joanna A. Jones. The Jocelyn Bioh dark comedy will run through Nov. 15.

To (more) life!
The National Yiddish Theatre Folksbiene has announced an extension for its Yiddish language adaptation of “Fiddler on the Roof.” The first of its kind production, directed by Tony winner Joel Grey, will now run through Oct. 25 (opposed to its originally-announced Aug. 26 closing). Starring Jackie Hoffman, Steven Skybell, and Jennifer Babiak, performances are running at the Museum of Jewish Heritage.

Make your own opportunity! Check out Backstage's theater audition listings!

Casey Mink
Casey Mink is the senior staff writer at Backstage. When she's not writing about television, film, or theater, she is definitely somewhere watching it.
END_OF_DOCUMENT_TOKEN_TO_BE_REPLACED