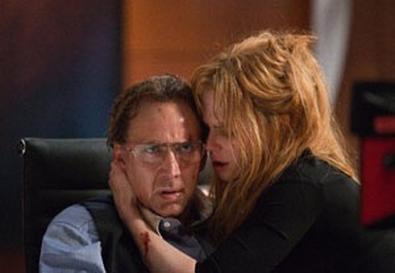 Photo Source: Millenium Entertainment/Alan Markfield
TORONTO (AP) — Nicolas Cage may be happy he got to work with Nicole Kidman and reunite with director Joel Schumacher on his new thriller "Trespass." Yet Cage isn't thrilled that viewers will be able to watch the movie at home the same day it opens in a handful of theaters.

The story of a family terrorized by home intruders, "Trespass" debuts Friday for a limited theatrical run in New York City, Los Angeles, Chicago and seven other major markets. It will be available at the same time for home viewing through video on demand.

The DVD and Blu-ray release follow barely two weeks later on Nov. 1, compared with a typical window of about four months between the time most Hollywood films open in theaters and debut on home video.

It's a business decision that will help "Trespass" distributor Millennium Entertainment, an independent outfit that does not have the big marketing bucks of a Hollywood studio, make the most of its advertising dollars.

Cage understands that, but he wishes the movie could have a separate life on the big-screen before it goes to smaller television and computer screens — or even tiny cell-phone screens.

"I like movies to be seen the way the director wanted them to be seen, which is on the big-screen, with an audience, with their popcorn," Cage said in an interview alongside Schumacher at September's Toronto International Film Festival, where "Trespass" premiered.

"I want movies to be an event. I want people to get excited about it and go out for the night with their wife or their date, whatever it may be, and have it be an event. I don't want it to get smaller and smaller and wind up on a cell phone."

Smaller distributors such as Magnolia Pictures and IFC Films often release films to theaters and video on demand around the same time. Some films can be watched at home ahead of their theatrical release, such as Kirsten Dunst's "Melancholia," already available to rent through video services a month before it debuts in U.S. cinemas.

With Academy Award winners Cage and Kidman, along with director Schumacher ("Batman Forever," ''A Time to Kill"), "Trespass" arguably is the biggest test yet for simultaneous big-screen and home releases. Cage stars as a diamond dealer taken hostage with his wife (Kidman) and daughter by masked thugs looking for jewels and cash.

Several studios experimented with plans offering video-on-demand rentals of films such as Adam Sandler's "Just Go with It" and Matt Damon's "The Adjustment Bureau" just 60 days after their theatrical release. Those were expensive rentals — $30 a pop — and the timing was after the films already had done most of their business in theaters.

As another test, Universal Pictures had planned to offer home rentals of the Eddie Murphy-Ben Stiller action comedy "Tower Heist" to viewers in Atlanta and Portland, Ore., just three weeks after its Nov. 4 theatrical release.

But Universal said Wednesday it was delaying the VOD release after theater owners complained it might cut into their business. The "Tower Heist" VOD would have cost $60 to rent, a hefty price for home viewing but potentially cheaper than movie tickets, popcorn and sodas for an entire family to see it in theaters.

"Trespass" will be available to rent for as little as $6.99 through such sites and services as Amazon.com, Blockbuster and DirecTV. At that price, and since it plays only in 10 theaters, it's fair to say that most viewers of "Trespass" will end up seeing it at home.

"We're very encouraged that it will be quite successful," said David Sobieraj, president of strategic planning and television at Millennium Entertainment. "In this day and age, independents are pretty much consolidating some of the windows on theatrical and home releases. It maximizes the marketing dollars across the board."

Those shrinking windows have theater owners worried that more people will stay home and wait for movies on video rather than heading out to cinemas. Top filmmakers including among them James Cameron ("Avatar") and Michael Bay (the "Transformers" movies) sided with theater owners in an open letter last spring, as studios were testing their $30 video-on-demand rentals.

Schumacher, who previously directed Cage in "8MM" and Kidman in "Batman Forever," said he would prefer that people see his movies in a theater. But he acknowledges that technology is changing the way fans watch movies.

"I'm easily assimilated," Schumacher said. "Yes, it's wonderful when people see your movie on the big-screen, but a lot of our movies are seen over and over again on television, and also DVDs have brought a whole new audience. ... I'll accept it if they say they watched it on their cell phone one day. They watched it and they enjoyed it."

Cage concedes that with the high cost of taking the whole family to a movie, parents could save up for a couple of months, "get a big-screen TV and just watch your movies at home.

"So that's why people have to get smart about how they release movies, and they have a point. Put it on the big-screen and also get ready for the future, which is, people are going to be watching movies at home with their friends, drinking beer and talking as loud as they want," Cage said. "I get it. I just don't like it."