'Caged' Reveals Much About the World We Live In 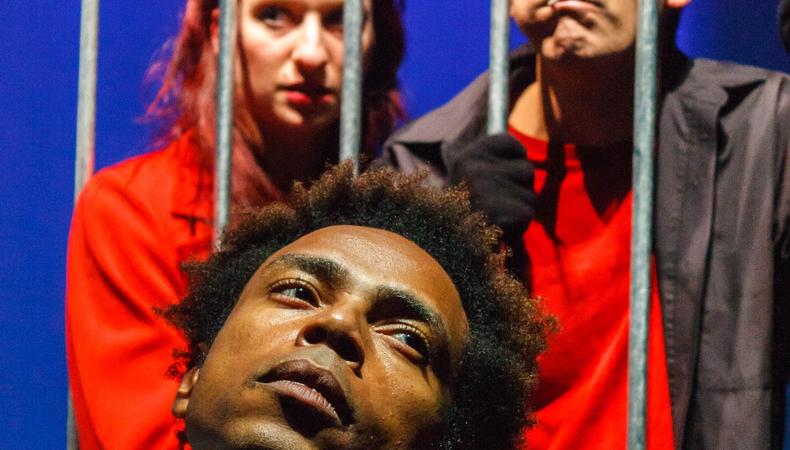 The study of a species is fascinating: finding two prime specimens, observing habits and rituals, noting behavioral changes in captivity, determining the creatures’ biological needs and motivations, and taking stabs at understanding their psychological motivations and emotions. Look! They’re just like us! Charles A. Duncombe’s “Caged” is itself a fascinating study, full of sharp, funny, and touching observations about the human species, in all its variations. It’s a smart outing that’s wonderfully presented but in some respects feels more like a theatrical exercise—although a pretty gratifying one—than a compelling dramatic exploration.

We find ourselves in a zoolike institution where visitors enter and gaze at two naked, caged creatures that look remarkably human (Megan Kim and RJ Jones). On Duncombe’s simple but effective set, the audience is on the same side of the bars as the male and female on display. Naturally. We learn from the Keeper (Katrina Nelson) during a documentary-style interview (conducted by Leah Harf) that this is a particularly psychologically complex species, with disturbing behavior patterns that make its members unlike other animals; in the wild, they fall into elaborate hierarchies and actually prey on one another, exhibiting fierce cruelty and extreme violence. Indeed.

The Keeper’s detached commentary is often brilliant and hilarious. Duncombe nails his targets, whether zeroing in on male versus female bonding activities, the difference between the sexes when presented with mirrors and their own reflections, or the inexplicable attraction to religion. Director Frédérique Michel handles the material beautifully, placing Nelson and Harf on opposite sides of the playing area; we see them above one another on video screens, which adds to Nelson and Harf’s suitably distanced delivery.

But what’s even more interesting is watching and listening to the visitors, who are outside of the cage yet surely see projections of themselves within it. They come and go, the dialogue sparkles, and Michel moves the action along seamlessly between interview segments as we observe illicit lovers (Heather Pasternak and Nathan Dana Aldrich), lonely strangers (Kristina Drager and Justin Davanzo), stupid guys (David E. Frank and Erol Dolen), an unhappy older woman (Mariko Oka), and more. All seven actors playing the visitors inhabit multiple roles with ease.

As “Caged” progresses, we’re pleasantly surprised by many of the conversations and clever interactions, which reveal so much about the world we live in and the people with whom we share it. But what we don’t quite get is that world significantly shaken up or threatened. It’s all pretty safe, even when the animals prove that they are dangerous, and the play’s reach expands in its final moments.