Why Cameron Esposito Isn’t Afraid of Being ‘Too Gay’ 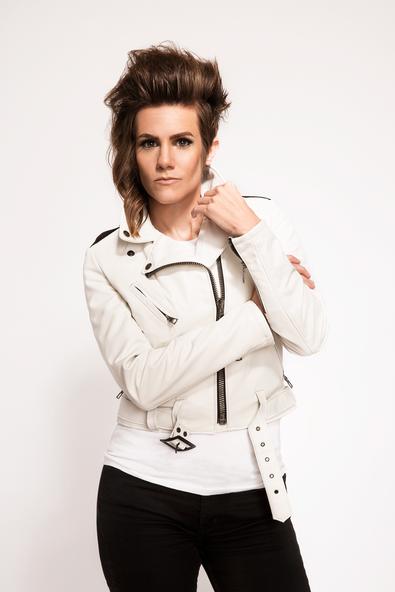 Since breaking out in 2014 with her hit video series “Ask a Lesbian,” Cameron Esposito has been the talk of the comedy circuit. With her Seeso series “Take My Wife,” she finally gets her due.

On her foray into acting.
“It’s very unexpected. I didn’t grow up around the entertainment industry at all. I grew up in the Midwest. I really didn’t know standup was a job you could have, and then I didn’t know the way that standup could lead to other things. I was a jock in high school. And in college I was a theology major and thought I was going to be a priest. Stuff has been very surprising along the way…. Standup has led to sitcoms for people in the past, but I really think now it leads to having your own small business that has a bunch of different facets.”

On semiautobiography.
“Thematically, [the series is] 100 percent true to life. But in terms of the action that takes place, that [comes] with the great help of our head writer, Shauna McGarry. We basically came in and we told her a bunch of stories, and she helped us combine characters and make it so that we weren’t actually stealing people’s lives from them.”

On critics who say her humor is ‘too gay.’
“I’ve always been a minority in majority culture, and I never really worried about talking about my life because all standups talk about their lives. It’s a criticism that I get all the time, and it doesn’t make any sense to me because I can’t see the world any other way.”

On her love for Rachel Bloom.
“I don’t usually watch comedies because it feels a little bit like work…. But ‘Crazy Ex-Girlfriend’ is the comedy that I think has transcended in the last couple of years. I’m so excited for [Bloom] and the fact that she was able to get that show off the ground. I know that she will get all the attention and accolades that she deserves—maybe it just wasn’t this time [at the Emmys], but it will come. I might be off-base here, but I really feel like people here in Los Angeles know what she’s achieved with that show, and I think she has a very long career ahead of her. Awards, of course, matter, because you want to be recognized for the work that you do, but I think that there’s another thing, which is just respect within an industry, and I think that that show has it in spades.”

On advocacy meets comedy.
“I think almost all standups do standup so they can talk to a younger version of themselves. In my case, it was really, really difficult to come out. I didn’t know gay adults, and I didn’t know that I could have a positive life. I was personally really upset to figure out who I was, and it doesn’t have to be that way; that’s always what I’ve been trying to [communicate], talking about my life and then making this show. It is a show about lesbians, and neither of us dies!”

Want to read more about actors on the rise? Read more of our Spotlight On interviews!

Benjamin Lindsay
Benjamin Lindsay is managing editor at Backstage, where if you’re reading it in our magazine, he’s written or edited it first. He’s also producer and host of a number of our digital interview series, including our inaugural on-camera segment, Backstage Live.
END_OF_DOCUMENT_TOKEN_TO_BE_REPLACED