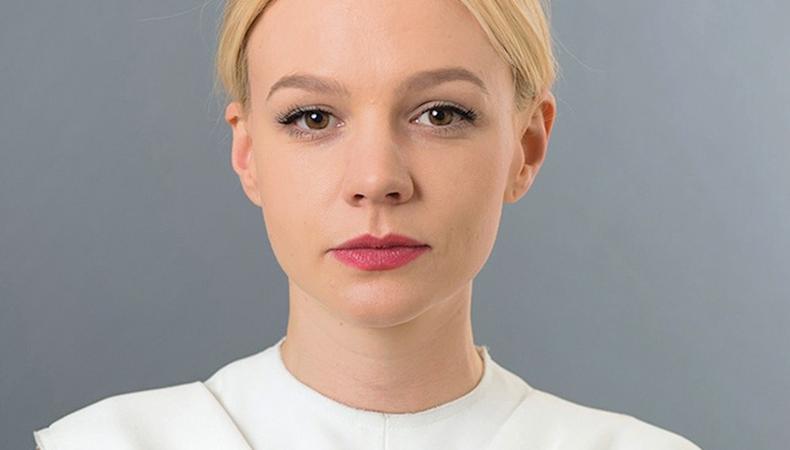 Call Carey Mulligan a movie star during a conversation at the Plaza Hotel junket for “The Great Gatsby,” and she shifts uncomfortably in her seat and interrupts you. “It doesn’t seem appropriate! That seems strange—and weird.” Then she pauses before throwing up her arms in mock capitulation. “Sure! We’re in the Plaza!”

She’s right, of course. In person, she’s far removed from the preening self-regard one normally associates with a movie star; onscreen, she’s drawn to complex characters in films directed by auteurs. And surely a movie star would never say, “I like auditioning. It’s quite fun!”

And yet look at her breakout performance in “An Education” as a young Englishwoman coached into sophistication by an older lover. That performance is the real deal, equal parts talent and that X factor of which stars are made. Or her divisive, courageous turn as Michael Fassbender’s broken kewpie doll sister in “Shame.” And surely no one but Mulligan could have played the effortlessly mesmerizing Daisy, the girl whose “voice is full of money,” the ultimately chilly heart at the center of Baz Luhrmann’s massive film adaptation of “The Great Gatsby.”

Because she has that voice. That voice that F. Scott Fitzgerald, safely confined to words on a page, described with full, lush power because he would never be called on to bring it to life for his readers. Daisy doesn’t just have money in her voice; she has “gay exciting things” threaded throughout her words. Her voice is “thrilling” and “the kind of voice that the ear follows up and down, as if each speech is an arrangement of notes that will never be played again.” In person, Mulligan has the cool, crisp voice of a Mitford sister; in the film, she so perfectly embodies Fitzgerald’s seemingly impossible vocal ideal that even the most ardent “Gatsby” lover will be appeased. Vocally, character and actor are a match made in heaven, and Mulligan characteristically attributes her success to the words.

“I think the reason she’s developed that voice is because she loves language,” she says. “She loves saying, ‘That’s all a girl in this world should be, a beautiful little fool.’ She loves these turns of phrase, and I think that’s why her voice has found that melody.”

Which leads us quite naturally to Fitzgerald’s wife and muse, Zelda, who looked down at her newborn daughter after giving birth and wished that she would be a “beautiful fool” long before Fitzgerald wrote “Gatsby.” There is plenty of Zelda in Fitzgerald’s Daisy, from her Southern belle upbringing to the way she effortlessly charmed men. Luhrmann orchestrated a full-immersion crash course in the Roaring Twenties, complete with lectures, dance lessons, and iPods pre-loaded with period music, but it was the canny Mulligan and her solo dive into Zelda’s life that added more Zelda to the film.

“One of my favorite parts of the whole process was finding things in Zelda’s writing and nagging Baz to let me put them in the movie,” Mulligan says. “Which he did, occasionally!” But while she celebrated the things she sneaked in—“I wish I’d done everything on earth with you”—she still mourns the lines and quips that she had to leave behind, turning her quest into one of comic desperation and laughing at herself for being so ardent.

That’s what keeps Mulligan firmly out of the ranks of “movie stars” as they’re generally perceived. She’s so keenly aware of what acting means that she can’t take herself as seriously as others might. This is an Academy Award–nominated actor who actively pursued Steve McQueen for a role in “Shame,” even resorting to subterfuge. When she tells it, it’s a delicious story—Daisy and Mulligan share a love of language—full of throaty murmurs as she recounts how McQueen kept trying to leave their coffee date and she, knowing that the part was not yet hers, kept convincing him to stay. “Finally he left and I followed him and I went, ‘Oh, you’re going to SoHo? I’m going to SoHo! How weird!’ ” She waits a beat. “I was not going to SoHo.”

That relentlessness is nothing new for Mulligan; she landed her first role, in the 2005 “Pride & Prejudice,” after writing to Julian Fellowes for acting advice. He told her to marry a lawyer. Undaunted, she wrote again and this time came away with an invitation to a dinner party where she met a casting assistant working on “Pride & Prejudice.”

So when she says, “When I was younger, it was so cool to not care about stuff or go for things you’re really passionate about,” one must take that with a grain of salt. She cares deeply about the work, performing in an Off-Broadway production of “Through a Glass Darkly” in 2011 and dividing up her film career among auteur directors such as Luhrmann, McQueen, and the Coen brothers. And no one but a craft-conscious actor would dream of saying of auditioning, “It’s quite fun. Especially when it’s a job you know you’re not going to get but you’re going to take a really good stab at it. And you get to act for a couple of hours!”

For virtually anyone else, Mulligan’s two 90-minute auditions for “Gatsby” would have been described as grueling. But for her, it was “so much fun.” Part of the pleasure could be ascribed to star Leonardo DiCaprio, who read with her both days—wearing a tux the second day.

“I walked away from it,” Mulligan says, “and I called my mum and said, ‘If nothing else, I just got to act with Leonardo DiCaprio for almost three hours. That’s so cool! I can tell that to my grandkids.’ And then it turned into a massive story to tell my grandkids.”

Mulligan was most taken by DiCaprio’s generosity, both in the audition (during which he improvised off camera) and on set. “He just wants everyone to be as good as they can be,” she says. “Being number one on the call sheet and being as nice as he was and knowing all of the names of the crew… He and Baz both set a really good tone for how everyone was going to behave. It was quite sad to leave!”

Some of that sadness was mitigated by Mulligan’s immediately flying to New York to film her scenes in Joel and Ethan Coen’s upcoming “Inside Llewyn Davis.” After months spent as a wealthy socialite on camera and an avid researcher of the 1920s off, Mulligan’s only preparation for her role was to watch a YouTube video on how to do a perfect New York accent, featuring, as she says, “this, like, Scottish guy or someone doing the worst New York accent.”

Although the amount of prep work Mulligan does before films varies from project to project—she normally keeps a book of things that strike her during research to look at during filming—she rarely does more than learn her lines in the most basic way before an audition, leaving her interpretation fluid enough to allow for malleability in the room. Nor does she dress up, though she admits that she panicked before her first audition for “Gatsby” and borrowed a dress from a friend. “And the instant I walked in,” she says with that gleam in her eye that forecasts a pretty good joke on herself, “I was like, ‘Oh, what am I wearing?’ So thank God the next day he put me in a real dress and heels and makeup.”