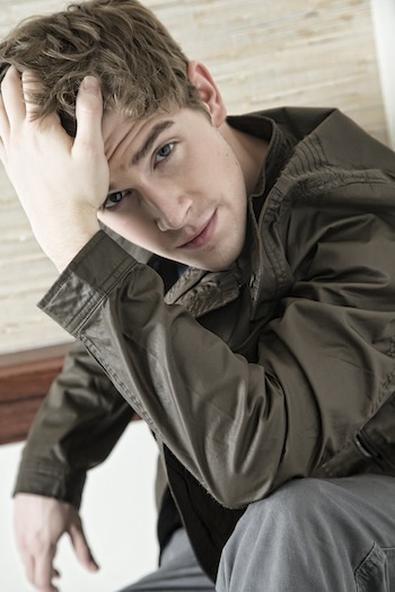 Brendan Dooling wasn’t avid "Sex and the City" fan, which is ironic, considering he’s now starring as Carrie’s best friend Walt Reynolds in ‘The Carrie Diaries’ – the CW’s prequel to the hit HBO series. But just because Dooling wasn’t a big follower of the original series doesn’t mean he didn’t watch from time to time. “My mom watched, and I’d catch the occasional episode with her,” he told us. “It was a nice bonding experience!”

When he wasn’t catching up with the Carrie and the gang, Dooling spent his time in acting classes at the Gateway Acting School in Bellport, Long Island, and theater productions at the Gateway Playhouse soon followed. Which lead to a voiceover role in "Elf on a Shelf: An Elf’s Story," a few television credits, and even a Sundance film.

But no role was probably as fun as the job Dooling had at Madame Tussauds in Times Square. There, surrounded by wax celebrities, Dooling worked in the 24-hour Scare Chamber. “We’d scare the pants off of people and then watch them run from the exhibition and huge a wax figure that they thought was their husband or wife,” he laughed. “It was pretty crazy.”

If things keep going the way they’ve been for Dooling, we wouldn’t be surprised to see his wax figure in Madame Tussauds one day. Until then, we chatted with the 23-year-old actor about the crazy ride he’s had so far, and what’s in store for Walt on ‘The Carrie Diaries.’

When did you first get the acting bug?
Brendan Dooling: I got the bug really early and started taking classes when I was 11. I went on a few auditions for Broadway musicals, and never stopped taking classes, but I didn’t take it seriously until I was out of college. I had done a showcase right before then, where I met my current manager. And he told me they were interested in me before I went away to college, which made going away that much harder. And once I got to school, I realized what I wanted to be doing was working with this management company and working regularly. And that’s when I moved to the city.

You voiced an elf in the animated "Elf on a Shelf" film. What’s the challenge of doing voiceover work versus television?
Dooling: They’re similar, actually. In voiceover, you have to restrain yourself when you’re acting in the sound booth in front of the microphone. If you lean left or you lean right, you’re going to lose the voice. Yet you yourself become animated when you’re doing the part. So you’ll see a lot of flailing arms, but a very still face. In television, you have to minimize your actions in order to look good for the screen. Ultimately, you work within a very small radius.

That’s a stark contrast from working in the theater
Dooling: That was something that I really had to work on in my current class. I actually did a monologue form "The Merchant of Venice,"where I got to clown and be really animated. And that was an attempt to get it out of my system and be able to dial it back and work within a very tight frame.

What was the audition process for "The Carrie Dairies" like?
Dooling: I originally read for the role of Sebastian, Carrie’s love interest. But when I didn’t quite capture his essence, they noticed that I had a little bit more of the sensitive, introspective vibe, and they asked me to read Walt for the callback.

Was it hard to completely change gears like that?
Dooling: Well that’s the game that actors are always playing, right? Trying to figure out what the casting director wants? I only had the overnight, so I went back and reviewed the script from Walt’s perspective. It was an interesting transition because I couldn’t change it that much. They obviously saw something they liked. So you don’t want to come in with a whole new interpretation of this character. You want to show them what you did in the room the day before even though you were reading for a different part.

What do you like most about Walt?
Dooling: His innocence. He’s very naïve, but wants a lot more. And that eagerness to break out of this self-portrait that is painted for him by his parents and the other kids in school is exciting. He is longing to be something different. He wants to be himself, which is what he hopefully gets to do when he approaches the city.

From what we’ve seen so far, it appears Walt may be coming out.
Dooling: We’re filming Episode 11 now and still, nothing has been confirmed. His friends can’t gauge him. And even though he has this core four, he’s not open to share why he is confused. It was a delicate time. And the reality of the 80s will definitely be a major part of Walt’s journey.

Were you worried about taking on a character with a gay storyline this early in your career?
Dooling: You know, every young male actor dreams of being James Bond in an action movie. And that’s their first role. But the truth is, when it comes down to it, that’s not relatable. So to be able to play a role that so many kids today and so many adults know lived through – to be able to depict that on television and maybe help some people who don’t have a voice right now or who are afraid to maybe use their voice right now? I think that’s a lot more rewarding. That’s the point of our job, to express the humanity.

"The Carrie Diaries" airs at 8/7c on The CW. For more information, visit www.cwtv.com.