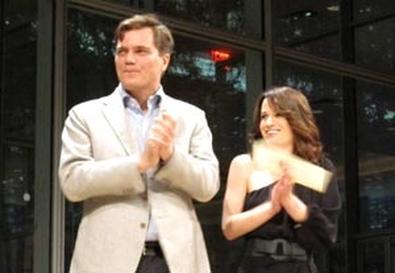 Casting directors came out from behind the curtain to be honored by their peers last night at the 25th Annual Artios Awards.

The bi-coastal awards, which were held simultaneously at the new Times Center in New York City and the Hyatt Regency Century Plaza Hotel in Los Angeles, are presented yearly for outstanding achievement in casting in theater, film, and television categories on the criteria of originality, creativity, and contribution of casting to the overall quality of a project.

The event was hosted in New York by comedian Janeane Garofalo, who admitted the stakes are a little higher when you're responsible for honoring your potential employers. "One would hope I don't fail," Garofalo said before the ceremony. "I can't imagine it would be helpful if I do poorly tonight -- unless they were casting for somebody who was failing at something. So hopefully I will not embarrass myself."

But on this night, the actors were happy to step out of the spotlight, as they were given a rare opportunity to celebrate many of the behind-the-scenes heroes who have secretly shaped their careers. These A-listers seemed genuinely thrilled to attend and show their support for the CSA members being recognized.

"The director's not going to know everybody out there," Shannon said while speaking with Pullman and Artios Award-nominated casting director Ellen Lewis ("Revolutionary Road") before the ceremony. "I mean, they're very busy doing all the things they have to do, so it's up to the casting directors to bring in the stack of photos and say, 'Think about it.' Without casting directors like Ellen, I'd just be sitting at home. It's a big deal."

While casting directors can be intimidating figures to the many young up-and-coming actors toiling at open calls, the night's guests shared an almost familial bond with the actors they have worked with. Both Pullman and Shannon were thankful for the faith that certain casting directors had shown them early in their careers.

"I can remember getting called back for a movie that I didn't think I was right for," Pullman said. "You know, 'artios' means 'appropriately fit' [in Greek], but I think a lot of times you want casting directors who will try and make you fit something even if you're not right for it."

"I play more against doing what people think I do," Shannon added. "You get put into a box, and casting directors help me try and get out of that and are instrumental in saying, 'You know, you might be able to do this too.'"

"I love casting," Lewis responded, "and I love actors, and I love directors, and I love trying to figure out how to create that world that the director is trying to see. You try to give a director some different ideas for how something can be played. Sometimes they're surprised by it and it does go a different direction, but it is really fulfilling. And I just think that it's great that within our own community that we have this acknowledgement of what we do."

Patrick Wilson also credits Lewis, among other casting directors, with shaping his career as an actor. "When movies come here [to New York] to shoot, they always know they're going to get great actors, even in the smallest parts, because these casting directors have such a knowledge of every actor in this city," Wilson said. He used casting director Bernie Telsey as an example: "As actors, you really reap the benefits of that because when you ask, 'Who casts for movies?' Well, the same guy who cast you in that Off-Broadway show. So New York is great that way."

Telsey, who was nominated for several Artios Awards for his work casting New York theater productions including "Speed-the-Plow," "Rock of Ages," "Blithe Spirit," and "reasons to be pretty" this year, said he was less concerned with winning an award than recognizing the work of his fellow casting directors.

"It's less about separating one from the other," Telsey said, "and it's even less about rewarding ourselves. But it's a chance to communicate and gather together, and basically truly celebrate the art of casting in all mediums, from television to daytime to musicals, plays, movies. It's really about celebrating all casting directors, rather than who wins or who doesn't win. What's important is that people recognize what it is that we do."