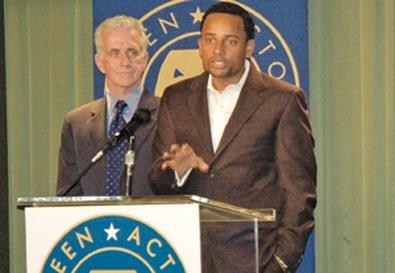 Photo Source: Paul Krekorian and Hill Harper of "CSI: NY"
California has changed the way many casting directors do business in the state, leaving some scrambling to comply with a new law they don't yet fully understand.

In January, the Krekorian Talent Scam Prevention Act went into effect. The bill—which garnered support from the Walt Disney Co., the Motion Picture Association of America, the American Federation of Television and Radio Artists, the Screen Actors Guild, and other industry players—was signed into law last year by Gov. Arnold Schwarzenegger amid fanfare that it would help give prosecutors the tools they need to target talent-search scams disguised as auditions. Supporters emphasized that many such scams are aimed at young performers and their parents.

"Everyone thinks that their child is beautiful," Los Angeles City Councilman Paul Krekorian, the former state Assembly majority leader who authored the bill, told Back Stage in November. "Once a child's dreams are taken advantage of by one of these wrongdoers, it's extremely difficult for a parent to try to resist the lure that if they just invest a little money in these services, their child will have their dreams fulfilled."

But L.A. Deputy City Attorney Mark Lambert, a driving force behind the law, made clear last month that he sees the Krekorian Act as a more complex tool that he and other prosecutors can use to address a wider range of unseemly—and now illegal—practices. Lambert drafted and mailed to more than 200 people a 13-page letter signed by City Attorney Carmen A. Trutanich explaining the new law and the penalties that violation can bring. The letter was targeted specifically at casting professionals known to participate in private casting workshops.

"We received a lot of complaints from actors about the workshops," Lambert said. "We tried to find as many casting directors and associates [as we could] that were listed with the workshops, whose names were in advertisements for the workshops, to let them know that this law applies to casting workshops and to make sure they're complying with the law if they're going to take part in them."

At issue is whether casting workshops qualify as paid—and thus illegal—auditions under the new law. According to Lambert, a casting workshop, properly run, is legal and qualifies as a "training service." Instructors must post a bond with the state and follow rules for contracts, fundraising, and recordkeeping. But based on his conversations with actors who have contacted his office, Lambert believes that some casting professionals involved in workshops have misrepresented themselves and taken advantage of their clients.

"Actors feel that they can't be seen by casting directors and associates unless they pay to go to the workshops," Lambert said. "The advertisements they see all portray that to a large extent. One actor, for instance, reported that they were told by the casting person there that they looked at the clients from the workshops first for acting jobs. They're complaining that it's a pay-to-play system and they can't be seen unless they pay. Most actors don't have money, and this would be tolerated in no other profession."

Pam Dixon of Pam Dixon Casting is president of the Casting Society of America. She and a delegation from CSA met with Lambert last week at his office in the hope of clearing up what she characterized as widespread confusion among casting professionals over the Krekorian Act. She said CSA and Lambert's office have formed a committee with the intent of creating guidelines for casting workshops. The last known set of guidelines was issued in 2002 by the state's Labor Commission.

"What we're trying to do is establish some guidelines so that everyone knows what the law really is," Dixon said. "I think there has definitely been some confusion. The letter didn't specify exactly what was going on." But Dixon added that CSA and the City Attorney's Office agree that standards must be set and adhered to when it comes to workshops and who participates in them.

"In terms of being fair to the people attending the workshops, it should be someone who is credible to teach," she said. "One of the things [Lambert] brought up is that sometimes an assistant who has worked in an office for a week is teaching. So I think there need to be guidelines as to who these workshops are hiring."

Another of Lambert's concerns is the practice of having actors leave their headshots and résumés with the casting professional teaching the workshop. This, according to Lambert, qualifies the workshop as an audition and is illegal under the new law. On this point, Dixon agrees as well. "There are some people that do teach how to do a résumé, what is a good headshot and what isn't," she said. "As a result, they might be using the headshot during instruction, but they need to give it back at the end."

The Screen Actors Guild threw its weight behind Krekorian's bill as it made its way through the legislative process last year. Zino Macaluso, SAG's national director and senior counsel for agency relations, said that how the law is enforced is up to the City Attorney's Office. But, he added, the guild's core concern remains the same.

"We want these entities that provide these services to essentially tell the truth about what they're doing," Macaluso said. "You're free to participate in a program hosted by a talent training service, but it has to be bonded; it has to use specific contracts; it has to tell you up front that it's not going to get you representation and that this is not an avenue for employment opportunities. Most importantly, how it communicates with you has to be honest and not misleading. If it complies with the bulk of those concerns that the guild has on behalf of its members—indeed, on the behalf of performers everywhere, especially children, who are falling into these gaps more and more—then our efforts in helping to pass this landmark piece of legislation will all be worth it."

With the Krekorian Act on the books for four months and counting, Lambert is plenty satisfied with the new legal tool at his disposal. He said his office is already "actively working to investigate and prosecute" several offenders, though he can't yet reveal the details of those cases.

"The notice has gone out, and we're at a point where we think no one really has an excuse not to comply," Lambert said. "The way that we're trying to proceed is to get the notice out, complaints in, and then start investigating them. It's working just as we had hoped."