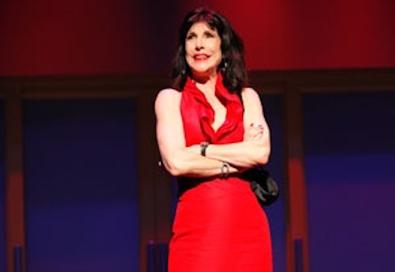 Photo Source: Carol Rosegg
Catherine Schreiber launched her career as an actor, before branching into writing and producing. Wearing these different hats is the joy of "being creative," she asserts. Schreiber insists she never turned to writing to create roles for herself or thought of her scripts as steppingstones to other goals. "Desperate Writers," which she co-wrote with Joshua Grenrock, is a case in point. Now playing Off-Broadway at the Union Square Theatre, the show began life as a film script. When it failed to make it to the screen, Schreiber turned it into a stage play, producing it first in Los Angeles before setting up shop in New York. She also gave herself a role, admitting it would be delightful if the play now found its way to becoming a movie in which she'd co-star, but it's just fine if that doesn't happen, she says. After all, she's having so much fun right now.

The farcical play recounts the antics of two beleaguered screenwriters who are convinced studio executives are not reading their scripts. They kidnap three high-powered producers and force them at gunpoint to read their work. Schreiber contends that though she never went that far, the writers' frustrating experiences reflect her own. While it all ends on a jolly, upbeat note, what emerges is the slim to nonexistent odds of success if you have your sights set on screenwriting. The play unintentionally raises the thorny question: Why keep knocking your head against the wall when it's obviously not happening for you over the course of many, many years?

Schreiber maintains it takes time, pointing out there's good money to be made doing rewrites and options in the interim. "But that's not my motivation," she says. "I love to write. That's why I produce. I'm a go-getter. I'm not waiting for someone else to give me the opportunities."

Schreiber is also a marketer with moxie to spare. Employing one of the repeated lines in the play—"lining up my ducks"—as a springboard to promote "Desperate," she strolled down Times Square towing a small plastic duck on a leash. As amused and baffled pedestrians converged, she stopped to chat about the show and hand out leaflets.

As a theatrical producer, her credits include the Tony-nominated "Scottsboro Boys," and last year's Tony-nominated "Next Fall." She also has a producing role in the stage version of the Oscar-winning "The King's Speech," slated for a London run this summer and a Broadway premiere in the fall.

A New York native, Schreiber graduated from Yale University, having majored in English. Despite a heavy course load, she found time to perform in school productions. Following graduation, she acted Off-Broadway and regionally before relocating to the West Coast, where she was featured on "Divorce Court" and wrote a number of its episodes. She explains the show was based on real cases and then beefed up for heightened entertainment. Schreiber went on to co-create a miniseries on Joseph Stalin for CBS, though it was never made. She also has scripts on the drawing board in various stages of development for Disney and Kate Hudson.

Schreiber married a corporate litigator and raised two kids who are now adults. During that time, she put her acting career on hold in order to be a mom. "Desperate Writers" marks her acting comeback on stage after 20 years, which makes the project even more special for her.

Taking control of her career is a major pleasure, and she urges aspiring writers and actors to do the same. She maintains it's a myth to believe you need an agent to get to first base. She says there are a fair number of competitions that screenwriters can enter online and off that do in fact catapult a career to the next level. She especially recommends InkTip.com as a website worth exploring.

"It is one of many, but I know people have sold scripts on this service," she says. "It's always scary to put your ideas on the Internet. But, if one doesn't have an agent, it can be a good tool. It can be a good tool even if one has an agent. Agents have lots of clients they are working with. You need to help create your own success." Readings of screenplay excerpts are another way to get your name known. "Meet actors who might be interested in doing a project," she suggests, adding it's not hard "to find places to do workshops inexpensively and get people to see your work. I know more and more screenwriters who are exploring this avenue today.

"I also know a lot of actors who are also taking matters into their own hands and doing one-man or one-woman shows," she continues. "It's the same principle. They can do it low budget. They can advertise and be seen. Look at 'My Big Fat Greek Wedding!' It's all about taking charge of one's own life—just as our dear Ashley [the heroine] does in 'Desperate Writers.' "

- At Yale, appeared in "The Idiots Karamazov" by Christopher Durang and Albert Innaurato

- Featured in A. R. Gurney's "Wayside Motor Inn" at Manhattan Theatre Club, "The Diary of Anne Frank" at Hudson Guild Theatre, and "Sly Fox" at the Williamstown Theatre Festival