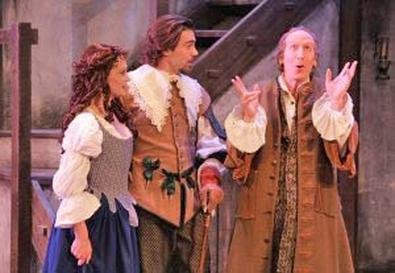 Photo Source: Michael Lamont
Celadine, the title character in Charles Evered's play, is loosely based on the real-life woman playwright and spy Aphra Behn, who led a life of amorous and political intrigue in the 17th century but still managed to find time to write plays like the still eminently stageworthy "The Rover."

Evered sets his play in London in the 1670s, where Celadine (Giselle Wolf) is the owner of a coffeehouse managed by her friend and business partner Mary (Holly Hawkins). Unbeknownst to Mary, Celadine had a secret love affair with a Mr. Rowley, aka Charles II, the future king of England, and she bore him a daughter. Celadine had a modest success as a playwright, but now her daughter has died, and she has written nothing since, though the coffeehouse is failing badly. The king (Larry Cedar) is visiting her incognito and importuning her to perform a bit of espionage for him, hoping to uncover a secret Protestant plot against his life. An actor (Michael A. Newcomer) is pestering her to write a play for him. And Celadine has acquired a new employee: a naive, ever-cheerful mute boy, Jeffrey (Will Barker), whom she calls her horse because he likes to carry her about on his back.

Evered apparently set out to write a modern Restoration comedy, but his play is too pale, genteel, and bloodless to qualify. It's all pleasant enough, and it's not without charm, but it's too loosely plotted, thinly written, and dependent on offstage action to generate theatrical excitement. A bit of swordplay toward the end perks things up a bit, but it's too little too late.

The production, however, is a fine one. Director Andrew Barnicle keeps the action lively; set designer Steven Gifford provides a huge, handsomely detailed, multilevel coffeehouse; and A. Jeffrey Schoenberg has created the lavish costumes, including a glorious ermine robe for the king. All the performances are excellent, even when the script gives the actors little to work with. Wolf's Celadine is handsome and spirited, and Hawkins provides spunky support as Mary. Cedar finds stylish comedy in King Charles' impatience with the fanfares and trappings of his office, Newcomer cuts a handsome figure as the actor with ulterior motives, and Barker lends a galumphing, eager-beaver charm to the hebephrenic horse boy Jeffrey.