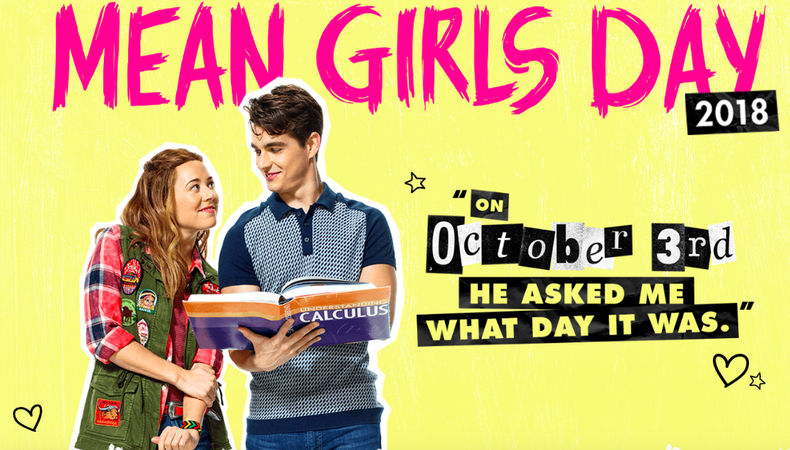 “On October 3rd, he asked me what day it was…”
“...and I said, ‘It’s October 3rd.’ ” If that profound line means something to you, then you probably already know that the third day of the 10th month of every year is Mean Girls Day, and a number of businesses have partnered with “Mean Girls” on Broadway for some fetch deals across NYC. Pop into Drybar at Bryant Park for complimentary wine with your full-of-secrets blowout, head to the Drama Book Shop to nab a limited edition bookmark, or fortify at Stonewall Inn where the film will be screening along with a special Plastics-inspired cocktail. (Prices vary; see a full list of participating business here)

Biggest stars of the big screen are heading to NYFF.
The 2018 New York Film Festival kicks off Sept. 28, and will once again feature a series of screenings, talks, and other cinephilia you won’t want to miss. Events, ongoing through Oct. 14, include Barry Jenkins and Martin Scorsese headlining respective panels, Elisabeth Moss in a live Q&A for her new film, and Jake Gyllenhaal and Carey Mulligan doing the same for theirs. Really, what more do you need to know? (Prices vary)

Shell out for a good cause.
Join a handful of badass women (and a few men, too) at Feinstein’s/54 Below for Broadway Acts for Women on Sept. 30. The fundraising event, hosted by “Saturday Night Live” star Cecily Strong alongside Martha Plimpton, will this year feature Sara Bareilles, Deborah Cox, Brandon Victor Dixon, and more, with funds going to Access Reproductive Care and other women’s health initiatives. As in years past, attendees will have the chance to place bids in order to select the song for the given performer to then take on—in front of the audience, without ever having rehearsed it. What could go wrong? (Remaining tickets start at $200)

Hit the streets for some street fair.
Head to the Upper East Side on Sept. 30 for 92 Y StreetFest ‘18, the annual street fair that has offerings for food, performance, local vendors, and other distinctly New York opportunities. The free event, on Lexington Ave. between 79th and 94th Streets, will feature performances from the Big Apple Circus as well as a number of Broadway shows including “Beautiful” and “Anastasia,” raffles to win cash prizes, and for-all activities such as pottery. And, to reiterate, admission will cost you exactly $0. (Free)

Hunt for treasures at the Broadway Flea.
An event the Broadway-obsessed look forward to year-round, the Broadway Flea Market returns to Shubert Alley Sept. 30, once again touting treasure troves of collector’s items and memorabilia from decades and decades of theater. Additionally, there will once again be a grand auction as well as special appearances and an autograph signing table featuring some of the block’s biggest stars including Chita Rivera, the casts of “Mean Girls” and “Be More Chill,” and beyond. All funds raised go towards Broadway Cares/Equity Fights AIDS.

Looking for a gig? Check out Backstage's NYC auditions!

Casey Mink
Casey Mink is the senior staff writer at Backstage. When she's not writing about television, film, or theater, she is definitely somewhere watching it.
END_OF_DOCUMENT_TOKEN_TO_BE_REPLACED