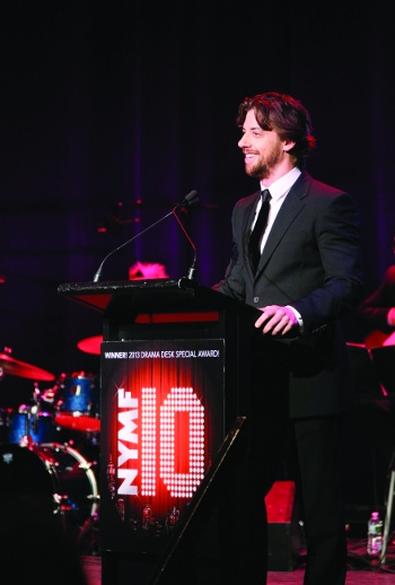 The New York Musical Theatre Festival recently celebrated its annual gala by honoring Tony-Award winner Billy Porter and commemorating the festival’s 10th anniversary. Having birthed such international successes as “Altar Boyz” and “[title of show],” NYMF burst onto the scene in 2003, immediately filling a gap in the theatrical community as a place for new, groundbreaking work and emerging artists. Fast forward a decade and NYMF continues to produce edgy, high-caliber new musicals, yet (like most 10-year-olds) it has matured.

“It was pretty down and dirty at the beginning,” NYMF Executive Director Dan Markley said at the gala. “Now people come with an expectation of a very high-quality level of production and experience from the actors. That’s progress.” Part of what has led ticketholders to such high expectations is the names attached to projects, but not necessarily in their typical capacity. After all, Porter, who won the 2013 Tony for his acting, actually directed for NYMF in 2008. “I always knew that I would direct,” said Porter. “I thought it would happen sort of more in the twilight of my career.” But Porter was lacking a challenge in performing, so when writer Matt Gould asked him to helm “Twilight in Manchego” Porter was able to use NYMF as a platform to further develop his directorial skills.

As Tony-winner Beth Leavel said, “If you’re an actor and you have a new skill as a director, or maybe a director who wants to act, I think [NYMF] is a great place to have permission to do that and to learn.” Steve Rosen found NYMF as a place to develop his writing skills. Rosen co-wrote and performed in “V-Day”—now “The Other Josh Cohen”—which premiered at NYMF in 2010. But prior to “V-Day,” Rosen had been known primarily for his acting acumen, originating the role of Sir Bedevere in “Spamalot” and re-creating the iconic Benny Southstreet in the 2009 revival of “Guys & Dolls.” While the festival began as a platform to unearth new shows, NYMF now lends itself as a ground for artists like Rosen and Porter to test roles in the industry. Markley welcomes it: “We want the Billy Porter–quality artist to come in and experiment and take a shot.”

But NYMF is not only conducive to industry pros expanding their skill sets; it’s a venue for veterans to learn and revitalize. “If fancy-pants people want to get back to their roots and get a taste of what it was that we all loved about the theater in the first place,” said Rosen, “working as a community to put on a show because there’s people coming to see it, then [NYMF]’s for you.”

Experienced performers may even relish the thought of working in a NYMF show. “When you come to the festival level, people might get to play roles they might not ordinarily have a chance to play,” said Markley. Of course, the festival is not ignoring its quest to discover new talent as it produces great new work. “These are projects that really thrive on a performance mixture of experience and people getting their first opportunity,” he said. It’s that mix that sparked Leavel’s involvement in NYMF’s Next Broadway Sensation. “It feeds my soul to watch this talent, these young people, come in,” she said. “I learn something from them, and hopefully they learn something from my old wisdom.”