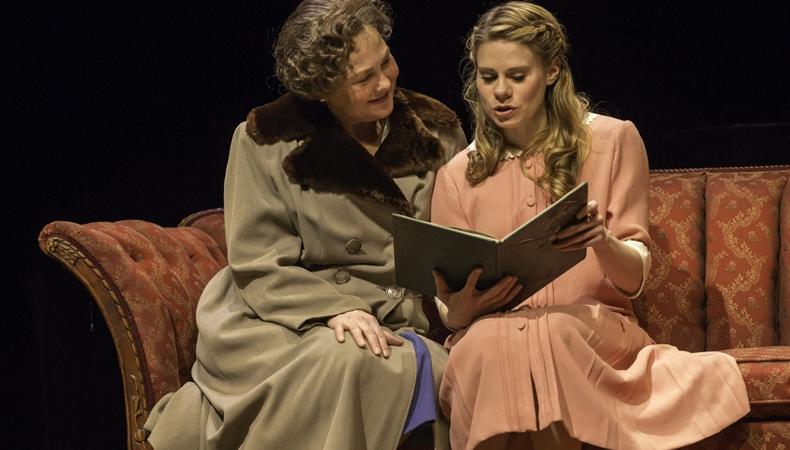 Cherry Jones didn't know Celia Keenan-Bolger before she joined the cast of "The Glass Menagerie."

"I’m just stuck in the straight theater, and I was working out of town a lot," Jones says in a warm Southern drawl. "I have failed to see that child grow up and I’m so sorry."

But she's thrilled to work with her now, adding that Keenan-Bolger's performance brings her to tears. "The Glass Menagerie," which also stars Zachary Quinto and Brian J. Smith, is directed by John Tiffany and opens at the A.R.T on Wednesday. Jones plays Southern matriarch Amanda Wingfield and Keenan-Bolger plays her shy and isolated daughter, Laura.

We had the opportunity to chat with both Jones and Keenan-Bolger—on separate occasions—about working on the play. The pair discusses their shared love of director John Tiffany, reinterpreting a classic piece, and wanting to do their laundry with Andrea Martin.

What attracted you to doing "The Glass Menagerie" at A.R.T.?
Cherry Jones: John Tiffany. One does not look a gift horse in the mouth, and he is a gift. He is an extraordinary being, that one…I didn’t want to do Amanda ever, and I’m still not sure I’m right for her. But I would not have missed this ride for anything in the world. He conned me into doing a reading of it, and I realized that I had a deep abiding love for Amanda. She reminded me of many of the elderly woman I had known as a child in Tennessee…Suddenly, reading this play, they all came flooding back and so it became almost an act of love for me to attempt this role. I really don’t know if I’m going to pull it off or not, but I’m having such a wonderful time trying and being in the room with these four artists.

Celia Keenan-Bolger: I was doing "Peter [and the Starcatcher]" and got this audition. I had seen "Black Watch" a while ago the first time at St. Ann's Warehouse and was so completely blown away by John Tiffany and Steven Hoggett. I remember saying to my husband, "If I ever got to work with either of them, I think I would go anywhere in the world to get to be in a room with them." Steven worked on "Peter and the Starcatcher," which was one of the very greatest parts of that whole process…and I saw that John was directing "Glass Menagerie"… And then auditioning for John, I felt like I would give anything to get to work with him. I remember asking him, when I walked into my audition, "Do you have ideas, like is this a specific kind of production of this?" He said "No, I want to assemble a group of people and make something together." So that made me feel less intimidated. This play is a beloved play. It made me feel less that the expectations had to be a specific way. And I just sort of did what I had imagined.

Celia, you and John Tiffany have both worked on a lot of new work. What is it like taking on a classic piece?
Keenan-Bolger: John has said a lot of times: "I was always so intimidated to do something classic. I never really thought of myself as that kind of director." Getting to do a play that is as good as this play where you’re just, I feel like more than almost anything I’ve ever been in, that this plays takes care of you so amazingly that you don’t have to do very much because there’s so much that’s already there in what’s not said and what is said. My respect for Tennessee Williams and for this play has grown exponentially as we’ve continued to work on it.

Were you familiar with the play?
Keenan-Bolger: I had read it in high school. I’ve never seen it onstage, I’m embarrassed to say. But I read it again in college and always really enjoyed it. I remember thinking that it was a beautiful play and thinking that Laura was a really great part.

How is working in Boston different than working on Broadway? Do you still feel a part of the New York theater community at A.R.T.?
Keenan-Bolger: I feel separate from it now. The way that I feel close to it is because I’m here, and someday I’m hoping that I’m going to get to do my laundry with Andrea Martin who lives on my floor. Because there are people—Terrence Mann and Charlotte D'Amboise—that you do see that you could see on 42nd Street, but instead it’s on Massachusetts Avenue. In that way, I feel like there are obviously a lot of people who work on Broadway who want to come work here and so in that respect, I feel close to it.

Did you have any interaction with the "Pippin" company while they were there?
Jones: This is my favorite interaction I’ve had with the "Pippin" company. We’re all sort of in the same building, and I was in the laundry early in the other morning trying to get my comforter washed. I was standing in the laundry room in my pajamas, and I ran down the hall and I thought, I’m going to get in here, no one will see me. I just ran down and all of the machines were full and all of a sudden I hear these little slippers come in behind me and I thought, Oh no, I’m caught! I turn around, and it was Andrea Martin in her pink robe! It was so thrilling for me. Because I’ve never really met Andrea, and we just sort of fell on each other. We were so happy to have a little laundry room talk.