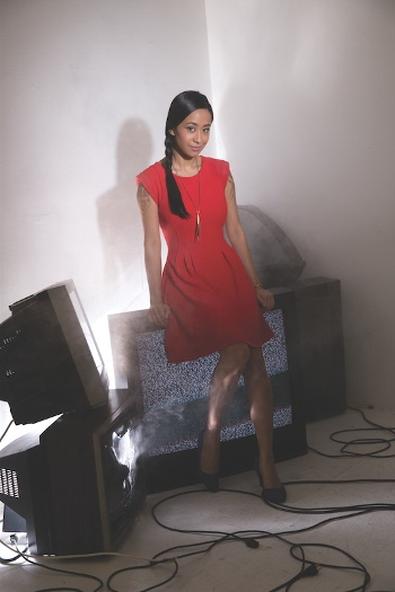 You might not know Charlene deGuzman by name, but chances are you know her username.

Known on the Internet as Charstarlene, the 29-year-old actor, improviser, and social media starlet created quite a deafening buzz when she released her short film “I Forgot My Phone” earlier this year.

A thoughtful film that involves no dialogue, “I Forgot My Phone” captures the reality of the millennial age and society’s current dependence on phones and social media. “I didn’t know it was gonna go viral!” deGuzman says. “I had this [idea] in my head; I wanted to share it with other people and see if they could think about it too, start some dialogue. It went far beyond my expectations.”

Fittingly, social media has been her most valuable tool as an actor and a writer, and deGuzman doesn’t take that for granted. She grew up in the Bay Area with a love for dance and theater and no intention of pursuing either professionally. But after she moved to New York with plans to write for a magazine, she attended an open casting call on a whim and booked a part in the national tour of “Stomp.” Armed with the knowledge that she could in fact make a living doing what she loved, deGuzman made the move to Los Angeles five years ago. She booked a recurring role as a drummer on Disney’s “Hannah Montana” that lasted for three seasons, but deGuzman still felt a void.

“For a few years in L.A. I wasn’t doing anything; I had no creative outlet; I was just waiting by the phone like, ‘When am I gonna get something?’ ” she says.

That all changed when she began taking improv classes at Upright Citizens Brigade. “I latched on to this [comedy] community. Now I do all the UCB stuff—I’ve done standup, I’ve done sketch shows, I have a comedy team. The comedy community has been so amazing to me.”
Discovering her comedic voice also helped deGuzman to develop a presence online.

“When I started taking improv, I was like, ‘Hmm, maybe I could start saying [funny] things on Twitter,’ and honestly, it was just me being honest,” she says. “People really liked that.”

“People” included veteran comedian Patton Oswalt, who, after finding deGuzman on Twitter, asked her to do standup and open for him earlier this year.
“Patton Oswalt discovered me, and he started retweeting me,” she says. “So he is like my fairy godfather. I probably have all my followers because of him. And he still retweets me! Then, like, I’d write something and I’d do a blog, or I’d do a video, and he’d retweet that too! I cannot wait for the day to just send him a gift basket.”

It’s been a whirlwind year for deGuzman, but her focus is on creating more opportunities. Whether it’s a tweet, a blog post, a pilot, or a short film, deGuzman knows her strength is in using her voice to connect with her audience. Like fellow writers and performers Lena Dunham, Tina Fey, and Mindy Kaling, deGuzman says her dream is to write a movie or a TV series for herself.

“If you’re able to write, and you have a voice that you’re very aware of and willing to share, I feel like that’s something you need to take advantage of, because you can write the best for you,” deGuzman says. “The more that I’ve put out there, the more I’m getting comfortable and confident with myself. And I’m finding that I just want to keep creating and not wait around for anything.”