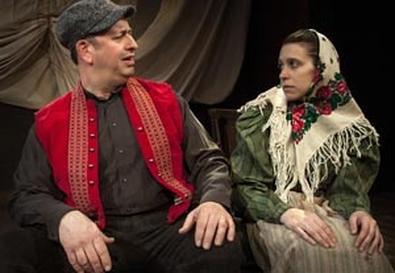 Photo Source: Dan Region
"Chekhovek" is like a slim, nicely drawn picture book depicting nine carefully selected short stories by Anton Chekhov (out of the hundreds he wrote). It's a respectful if not very gripping distillation of work by a writer who was as masterful with this prose form as he was with plays. Melania Levitsky, who both adapted the stories from the standard early English translations by Constance Garnett and directed, has assembled the show as a series of eight self-contained episodes, with scenes from another story, "The Lady With the Dog," one of Chekhov's best known, interwoven throughout the performance. As it unfolds, it provides the proceedings with a semblance of a through-line.

Levitsky gives her dramatizations a fluid staging, embellished with some comic bits not precisely indicated by Chekhov but not disruptive either. There are lively snatches of Russian singing and dancing, with composer Jonathan Talbott supplying evocative music. The five actors—Eddie Allen, David Anderson, Elizabeth Fountain, Rob Leo Roy, and Celia Schaefer—people the tales with aptly defined attitudes and also take turns serving as the omniscient narrator. Costume designer Erica E. Evans has garbed them in generally handsome period clothes, and David L. Arsenault's set amplifies the period feeling: vintage trunks serve as furniture and storage for the many costume changes, a voluminous white curtain is draped at the rear, and old-time footlights border the front.

Unfortunately, the depth of the thwarted aspirations, heartbreak, and foibles that make Chekhov's characters so breathtakingly universal and recognizable is rarely realized. The portrayals frequently come across as not much more than sketch work, adroitly but slickly done. The externals are there, but soul is in short supply. Among the high points, though, is the robustly comic frustration of Anderson in "Death of a Government Clerk," as an unfortunate fellow who at the opera inadvertently sneezes on a general and then can't get the officer to accept his apology. Fountain has convincingly seductive moments as the title character in "The Chorus Girl," while Roy scores with funny stuff as a drunken military officer in "The Chemist's Wife." In "The Lady With the Dog," Allen and Schaefer affectingly display the muted passions of a man and woman, each unhappily married and caught up in an extramarital love affair, but the desperation and inexorability of their situation remain unexplored, although the narrator tells us about it.

"Chekhovek," by the way, is a mash-up of the writer's name with two other Russian words, one meaning a person and the other defined as a century or era. I suppose the fusion suggests the importance of the writer as a human being of his time. But the show could just as easily be titled "Chekhov Lite."