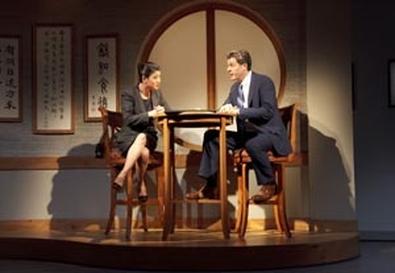 Photo Source: Michael McCabe
You may have heard that large swaths of David Henry Hwang's new play "Chinglish" are spoken in Mandarin, with English surtitles. Don't let it intimidate you. The choice is essential to the success of this smart and uproarious comedy examining the difficulties in bridging Chinese and American culture. Staged with sharpness and subtlety by director Leigh Silverman on David Korins' wondrously whirling and interlocking set of hotel rooms, lobbies, restaurants, government offices, and the like, the show is both a crackling good time and a thoughtful, nuanced look at the challenges posed by the latest nation out to usurp American economic supremacy.

Corn-fed Ohio businessman Daniel Cavanaugh arrives in the small Chinese city of Guiyang (think Cleveland) with the intention of cornering the market on signage for his family-run firm by providing accurate translations to replace the unintentionally comic ones dotting the landscape. In short order he acquires a business consultant, Englishman Peter Timms, who has taught English in China for 19 years but is reinventing himself, and a lover, the married government functionary Xi Yan, who despite her initial suspicions decides that Cavanaugh is "honest" and a "good man." As the trio tries to negotiate the elaborate societal rituals necessary for an American to ingratiate himself into Chinese business, we begin to learn that no one, Chinese or American, is really what he or she seems. And through the intercultural romance, we see just how different (and possibly unbridgeable) the two societies' views of love and personal responsibility are.

Silverman elicits fine performances all around, but it's two of the ladies who walk off with the play. Jennifer Lim is tough, tight, yet also vulnerable and touching as Xi Yan, fully illuminating the character's complexity while landing laugh after laugh with her superb comic timing. The riotously funny Angela Lin steals every moment she's on stage in two contrasting roles, a self-conscious interpreter whose skills aren't up to snuff and a gung-ho prosecutor who is nevertheless more impressed by malfeasance and notoriety than honest but unheralded industry.

As an Ohio native, I can tell you definitively that Gary Wilmes has the shambling Midwestern naiveté thing down cold as Cavanaugh. Wilmes' role is the hardest, as Cavanaugh, though rarely offstage, functions more or less as the play's straight man, but the actor still manages to find depth in this fish out of water and is quietly moving in Cavanaugh's sudden outburst of love for a woman he doesn't remotely understand. Stephen Pucci is a boisterously British Timms, successfully suggesting a variety of hidden agendas underneath the hail-fellow-well-met façade and particularly convincing when inconvenient emotions erupt to crack it. Larry Lei Zhang, as a self-interested government minister who never says what he means, makes much out of one of those pasted-on smiles that soon come to seem vaguely terrifying. In smaller roles, Christine Lin amuses as another not-so-hot interpreter, while Johnny Wu is properly contrasting as a stern judge and an inept but highly entitled translator in place due to nepotism.

Anita Yavich's costumes, Brian MacDevitt's lighting, and Darron L. West's sound design combine with Korins' inspired set to emphasize the surface banality that has settled over this ancient and colorful land, reinforcing the play's theme of dangerous shoals hidden by bland exteriors. But I don't in any way want to make "Chinglish" sound like a chore. Yes, it's perceptive and intelligent and told with a perspective not usually seen in the commercial theater. But more than anything else, it's just very, very funny.