Choreographers Discuss How They Make Their Musical Choices 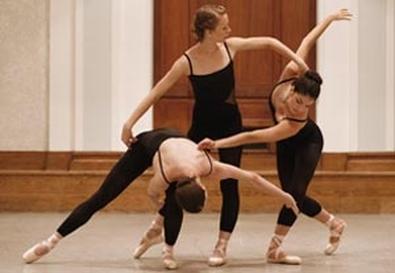 To effectively perform a piece of choreography, a dancer needs to master not only its physical aspects but also its musicality. Yet choreographers often differ in how they work with music, so an understanding of one dancemaker's concept of musicality may not apply across the board. Some choreographers work in tandem with the music's rhythms or phrases; others work against the music, or forgo it completely in favor of silence, text, or sound scores. The great neoclassical-ballet choreographer George Balanchine was notorious for mixing it up—making moves that meshed, anticipated, contradicted, or "commented" on the music, all within a single ballet.

One of this spring's programs in the thought-provoking Works & Process series at New York's Guggenheim Museum featured dance pieces created by contemporary choreographers Donald Byrd and Pam Tanowitz to the music of experimental composer John Zorn. During the discussion segment, the choreographers were asked how they made their musical choices—when to move with the music, when to go against it, etc. Time constraints, or perhaps the difficulty of the question, did not permit either one to give a full and satisfying answer. I therefore decided to ask the same question of choreographers from three different dance genres—ballet, modern, and tap—in the hope of gaining deeper insight into how choreographers work with music.

Ballet choreographer Miro Magloire, founder and artistic director of the New York–based New Chamber Ballet, was originally a composer and still works a day job as a musical accompanist for dance classes. "In one way or another," he says, "the meeting of music and dance has always been at the forefront of my professional artistic life."

Because of his background as a composer, when Magloire started choreographing he let the technical structure of the music dictate his choreographic response to it. "The way the music is built—the melody, the rhythm, the harmonic structure—is what I thought I should relate to," he says. "But over time I grew more interested in trying to respond to the atmosphere or spirit of the music, the emotion maybe. I've seen dances that had no apparent structural relation to the music and yet I felt they completely 'matched' the music—and vice versa."

Magloire's choreographic approach to music has developed into a dual system that he feels represents the two fundamental ways people interact with music: "If you go back far enough in history, you come to a time when the two art forms, music and dance, were one. You had a feeling, and you expressed it by singing and dancing. Then out of the human movement came the desire to add rhythm, so you started banging on a stone or a stick, and before you knew it you had music that was completely 'identical' to the dance. Virtually all cultures have dance traditions where every movement impulse matches a musical impulse. That is one part of how I experience music and dance.

"But there's an opposite part that comes from my formal training as a composer. One of the first things you are taught in composing is not to overlay identical things or repeat what's already there. You want to create something different, as contrasting as possible; it's called counterpoint. When I choreograph, I go back and forth between these two impulses. On the one hand, I want to completely become one with the music, but the parallel impulse is to avoid replicating what the music is doing."

The modern-dance choreography of Jacqulyn Buglisi, co-founder and artistic director of Buglisi Dance Theatre, reflects a similar impulse to use music to mirror aspects of the choreography but not always duplicate it.

"The music is so close to the soul of a work for me that it must marry what I'm trying to say choreographically," she explains. However, Buglisi is a former member of the Martha Graham Dance Company and learned a key lesson from Graham: "When the music became very powerful, Martha would just stand still. Or she would just walk. And the power of her walk, the intent behind the walk, was all that was needed choreographically." At the height of the music, you don't elaborate, Buglisi believes, because you might dissipate the dramatic power.

A dancer who often creates her own musical arrangements, distinguished tapper Brenda Bufalino says that style dictates how a tap dancer works with music. "When I'm dancing bebop," she explains, "I like to do contrapuntal work, where I'm 'playing' a line and the musicians are playing their lines and we see how these different lines go together. But that's quite different from if I were dancing swing, where the music would leave two bars open at the end of the phrase for the dancer to be the soloist."

One of Bufalino's favorite ways of working with music is unpredictably. "Sometimes I'll tell the musicians, 'We're going to do this ad lib,' and we all improvise," she says. "We have the tune, the chord changes, but we're not working within a rhythmic structure. Other times I might perform set choreography over improvised music. In that instance, I'm using the music in a painterly way. I love putting things together that wouldn't normally be put side by side. The juxtapositions create emotion, energy, sometimes anxiety. It can make audiences very uncomfortable, which is why they usually burst into applause when you go back into time. The return to the rhythm is a relief."