Christopher Walken and Catherine Keener on Impersonations and Changing Dialogue 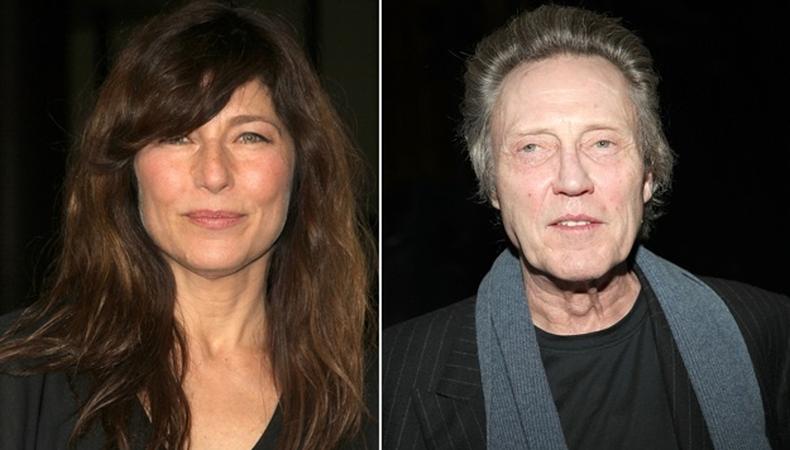 Catherine Keener has never heard of “Balls of Fury.” Christopher Walken, who co-stars with Keener in “A Late Quartet,” which opens Nov. 23, is trying to explain the plot of the 2007 comedy. “It’s a ping-pong movie. I play an Asian crime lord,” Walken says with complete seriousness. “I run a tournament…to the death.” Keener explodes with laughter, saying, “This is so fucking exciting to me that I get to find this movie!”

The pair have never worked together prior to “A Late Quartet,” Yaron Zilberman’s film about members of a New York string quartet that begins to fracture when their cellist (Walken) learns he has Parkinson’s Disease. Keener co-stars as a musician married to a violinist played by Phillip Seymour Hoffman.

What attracted you to the script for “A Late Quartet”?
Christopher Walken: I think I was the first actor signed on, and it was maybe a year before we shot it. I got the script and met Yaron, and then it took awhile.

Catherine Keener: You attracted me to it. Any actor wants to be in any movie with Chris. Oh come on, you know it’s true.

Is that flattering?
Walken: It’s wonderful. I have been around a long time, and I’ve had my ups and downs.

Keener: We know we’re going to get a really fun game with Chris. That’s the thing.

Walken: We all knew each other’s work but we didn’t really know each other. I’d worked with Phil Hoffman in the theater and actors have a good time together, almost always.

Keener: I’ve worked with Phillip four times. And we finally get to be married. I just love him. I’m so excited I get to be in a movie with these amazing actors.

Keener: Favorite is weird because I can say what’s my most comfortable pair of shoes; then I can give you something. But favorite performance, I can’t even think of them.

Walken: Not only that but when I’m in a movie, I judge myself. I think, “In that scene, you were just no good. But in the scene after, you were wonderful.” It’s always that mixture. And you just hope the good is more than the bad. I’ve never watched myself in a movie and thought, "Wow you were terrific." [I think], "I wish I’d done that scene better, I wish they’d cut that."

Keener: Absolutely. Or, “Why’d they use that shot? Don’t they know the other one was better?”

Christopher, I’ve heard you ban impersonations of yourself on sets.
Walken: Nah. Well one time, I actually did work with an actor once who used to do me. He’d memorized my dialogue and he’d do me doing the dialogue that I was about to do. And I’d listen to this and one day I said to him, “You better watch it.” He was funny. When people do that, often I don’t know what they’re doing. It takes me a minute to catch on. I think, “Why are you talking like that?” I don’t think I sound like that.

Walken: I did a sketch on “Saturday Night Live” where it was like a family reunion and they all had my hair. Also they were all races...but they all sounded like me.

Christopher, is it true that when you get a script, you remove all the punctuation?
Walken: Yes.

How do you do that? Do you re-type your script, or go through it with a pen?
Walken: I used to, but I don’t have to do it with a pencil anymore. I’ve learned how to just not pay attention to punctuation. Also, scripts are full of stuff that you don’t need, you know. Often I’ll have a line in parentheses that says “wistfully.”

Keener: Or it will explain a sentence, “missing his wife.”

Walken: That’s sort of the enemy. You’ll find there’ll be a sentence and then “dot dot dot…” and you have to say, “What’s those dots?” I think most writers wants to direct the movie and that’s how they do it. Sometimes they can be adamant about it. I’ve had writers in rehearsals say, “You see here? It says, ‘Pause.’ ” That’s when the trouble starts.

Keener: It is. I’ve had a director say, “I’ve lived with this script for three years, I know how to do it.” In other words, what he’s saying is, “I know your part, I know how to play it.”

Walken: The smart ones never do that.

Keener: Because they know what’s lost in that kind of practice.

Walken: And the really smart ones work with you. I did “Sweet Bird of Youth” a long time ago and Tennessee Williams was around a lot. I got to know him well enough to say, “You know this scene here toward the end I don’t really understand it or what I’m trying to say.” And he said, “Honey, just change it. Say whatever you want, just make sense of it.” Of course, I didn’t change anything. But he did say that to me.

Want to be the next Christopher Walken or Catherine Keener? Check out our Los Angeles audition listings! Already landed a part? Watch the video below to see how actors should behave on their first day on set!