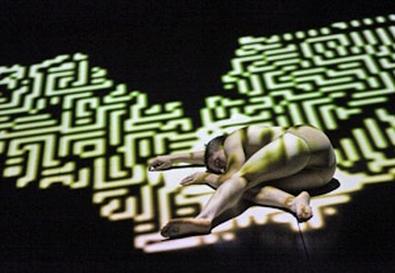 Be warned: This is not a performance for the fainthearted. The climactic 10 minutes of the hourlong sextet "Mortal Engine" are truly frightening. A huge cloud of smoke emanates from the stage and engulfs the audience. Then, horrifying bright green lasers shoot out through the house in long, sharp lines of penetrating light that assault the eyes while high-pitched noises pierce the ears. One's sense of well-being is completely demolished.

Created and performed by the Melbourne-based experimental dance company Chunky Move, this work is an ambitious, cutting-edge demonstration of the bold use of highly sophisticated technology in partnership with contemporary choreography. Through an interactive system designed by Frieder Weiss, video, light, sounds, and laser images are generated in response to dancers' movements, allowing for different outcomes each time the work is performed.

Unfortunately, the artistic result is far less interesting than the technological concepts. But, as with many experimental explorations, amid all the failed attempts lie small samples of success. Though most of "Mortal Engine" is boring and off-putting—irritating noises accompanying repetitive geometric animations and dancers simply rolling around or shaping their bodies along a giant ramp—the piece contains two arresting examples of brilliant "choreo-technological" fusion. In one instance, frenetic squiggles of light appear to be rapidly "drawn" on the ramp as three couples tussle and tumble about, their movement kinetics deeply enhanced by the visual effects. Later, an orderly pattern of short diagonal pieces of light is slyly disturbed and then quickly restored in response to, and enriching the choreographic intentions of, two couples who seem to be embedded within the pattern.

The highlight of the evening, however, is a scene of pure choreographic fun that, ironically, involves very little technology and had the audience in stitches. In a well-executed take on a familiar concept, a sleeping couple periodically changes its configurations, winding up on top of or ingeniously intertwined with one another, to appealing comic effect.

According to program notes, director-choreographer Gideon Obarzanek intends "Mortal Engine" to be about human relationships. But how does an artist make such a work in the dominating presence of technology? Further experimentation is needed.