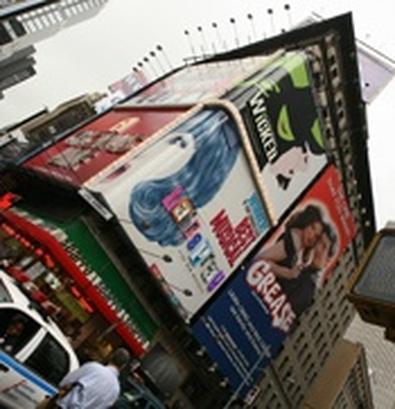 James J. Claffey Jr., president of the union that represents the striking Broadway stagehands, broke his long public silence Sunday and was by turns calm and combative as he tried to counteract the characterization of his members that has been put forth by theatre owners and producers -- namely, that they are overpaid and under-worked.

"A lot of people are out of work [as a result of the strike] and we understand that," Claffey said at a news conference held at St. Malachy's Church on West 49th Street in the theatre district. "But the theatre owners have offered us a 38 percent cut in jobs and wages. We tried to make a deal. They wanted to provoke us into the street."

Claffey, the head of Local One of the International Alliance of Theatrical Stage Employees, has spoken at times individually with reporters, but never as expansively or publicly as he did Sunday. He was asked repeatedly about his members' salaries, the highest among Broadway unions. "We're not going to apologize for the talent we bring to the table," he said. "We're fighting for the middle class."

At another point, he said Local One salaries account for 8 percent of the price of a ticket. If he were to make broad concessions to the League of American Theatres and Producers, Claffey argued, ticket prices would not go down and other unions would not be given raises.

During more than three months of intense and at times acrimonious negotiations, which resulted in a strike that began Saturday morning, Local One has remained largely silent, issuing a long skein of "no comments" through its spokesman, Bruce Cohen, and that posture continued through the first day of the work stoppage.

The league took advantage of the union's silence and held a news conference that afternoon, where executive director Charlotte St. Martin said: "It is fitting ... that the first show they walked out on was How the Grinch Stole Christmas... . Fighting to preserve the featherbedding concept that stagehands should be paid for not working is more important to them than preserving the holiday season for millions of theatergoers."

Later in her opening statement, St. Martin said, "We deplore the strike and the harm it does to the city, the industry, and the theatre-going public. Indeed, to all the actors, musicians, and other talented people who make Broadway magical."

Claffey took particular issue with the term "featherbedding," and he said his union would be in no hurry to return to the negotiating table as long as the league continued "with its attacks." When asked how long he thought the strike would go on, Claffey was unspecific. Asked how long the union's multimillion-dollar strike fund will last, he responded, "The strike fund runs out when the strike is over," a comment that brought the first sustained applause of the afternoon from union members.

"The $5.2 million defense fund is for everyone in the theatre community," he added. "If the league is so worried about the other people who work in the theatre, let them provide matching funds to the other unions. Let them put their money where their mouth is, if they really care about them [the other workers]."

The silence on the part of Local One had resulted in a growing frustration among theatre professionals sympathetic to Broadway labor unions, but they would not make their displeasure known publicly because they wanted to maintain a united front. On Sunday, Claffey was joined at the news conference by members of his negotiating team and officials of two other unions: John Connolly, executive director of Actors' Equity Association, and Bill Dennison, recording vice president of Local 802 of the American Federation of Musicians.

During the news conference, Claffey said that the union is not as intractable as it has been portrayed. "We have offered concessions on 10 points; they want us to concede on 40," he sad. "They can't go through our contract an annihilate it."

As an example, Claffey said Local One was willing to change the minimum number of workers required for a load-in after nine hours. Currently, owners and producers are required to hire 32 stagehands for load-in; if the load-in stretches to midnight, all 32 stagehands must be kept on, even if not all are necessary to finish the job. Claffey said the union was willing to let the league send home all but the necessary stagehands after 5 p.m.

The point of the stagehands' salaries, however, was addressed most forcefully when Connolly stepped to the lectern to speak. "In all that talk about how much stagehands make, not once [Saturday] did those producers tell you how much they make," he said, his angry voice booming high off the church walls and lifting members from all three unions out of their seats, where they clapped and cheered.

"Producers make money even if the show is a failure, because they get paid a fee," Connolly continued. "Theatre owners make money on a failure because they charge rent. The people who lose the money are the investors. The best way to ensure that investors make money is to make sure those theatres stay open. And the only way that's going to happen is if the league sits down and negotiates in an honorable fashion."

Two hours after the news conference ended, the league sent out another news release from St. Martin. Among the many points she stressed was salaries. "We have offered a significant raise in wages, but the union says there will be a cut in wages," she said. "The only explanation is that this would be the result of fewer people being paid for not working.... These issues can only be resolved at the bargaining table, not on the picket line."