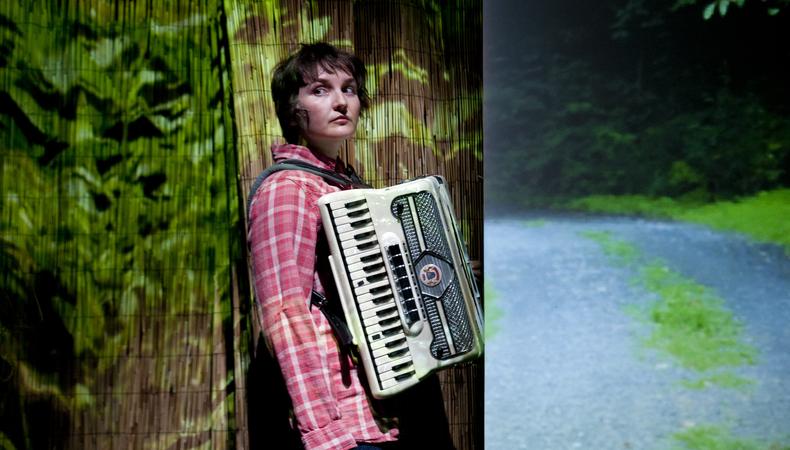 In the ongoing struggle to make good art about climate change, neither sympathy for the animals nor rage about our self-induced apocalypse seems to be doing the trick. One might then expect Cynthia Hopkins, a multitalented composer and performer whose stage works blur concert, film, and confessional performance, to point out a new direction in her latest work, “This Clement World.” Though she ably applies her many skills to the problem of climate catastrophe, the shift from what Hopkins calls her “private” and “solipsistic” work to a more activist focus seems to have cost her the knack for vulnerability and emotional complication.

The experience of “This Clement World” is nonetheless a feast for the senses. An upstage video screen showing images of the melting Arctic glaciers interspersed with footage Hopkins took while on an expedition with the climate change organization Cape Farewell is as crisp and breathtaking as an episode of “Planet Earth,” to designer Jeff Sugg’s credit. Projected images of a rainforest onstage right offer counterpoint to the tundra. Hopkins emerges from behind the greener screens to portray two of her chief characters, a Native American killed in an 1864 massacre and an alien disguised as a “fairly amiable dude” so the earthlings can see him. Both warn about the demise of our species, the latter with humor, the former with a vengeful fury that’s difficult to stomach.

Hopkins’ diminutive size, girlish voice, and oversized plaid outfit (when she’s not wearing deer horns and red paint on her face) make her an unlikely candidate for a stormy evangelical preacher. But much of “This Clement World” feels like a hipster version of “Sinners in the Hands of an Angry God.” They share the same argument: The forces that support and sustain us do so out of a generosity that is not everlasting, and if we don’t change our ways that love will turn to wrath, and we will have only ourselves to blame.

Such is the tone of the show’s monologues. Thankfully, they are broken up by the documentary-style images of the boat trip and by a series of original songs. Hopkins sings the latter in her signature intoxicating bluegrass orchestral style, joined by a band and a four-part chorus, both way upstage. Though the soaring energy of the music adds to the revival-meeting feel, it also brings a much-needed vulnerability and tenderness to the proceedings.

The most successful scene in “This Clement World” is a digression. Hopkins, charmed by the odd cast of characters on her arctic voyage, introduces us to each of them, lovingly highlighting their eccentricities and impersonating their quirkiest responses to her questions. The fascination and care she brings to these figures, who put their bodies in harm’s way to learn the tiniest details about climate decline, recall the complex relation between passion and self-preservation that is the subject of Hopkins’s best work. One hopes she recovers this human element before she decides to keep saving the planet.