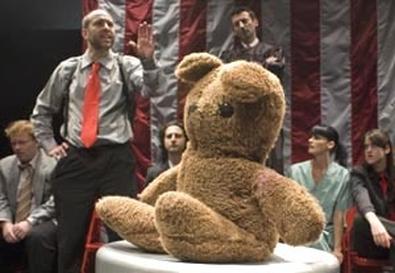 Photo Source: Sean Dooley
Even when delving into the absurd, a little rationality doesn't hurt. "Clifford Chase's Winkie," faithfully adapted by Matt Pelfrey from Chase's 2006 novel, takes aim at and often hits any number of ripe satirical targets: paranoia about terrorism, the 24/7 news cycle, empty patriotism, the addled right and ineffective left, Robin Leach–like pseudo-journalists, and media-generated mass hysteria. But in doing so it presents a reality so unreal that we're left wondering why Chase had to invent such an unlikely premise to heap ridicule on the world around us.

The unlikely premise: Winkie, Chase's beloved childhood teddy bear, passed down from his mother and elder siblings and feeling neglected and abandoned, wills himself to life, jumps out of Chase's window, explores the world, gives birth to another teddy bear, and is hunted down by the FBI as a terrorist. You read that right, and it's during Winkie's incarceration, torture, and trial that all the media-bashing occurs. But though the trial is acted out in considerable detail, just why the lovable Winkie is suspected of so many heinous crimes—including "sodomy, ritual sodomy, and sodomy with intent to sodomize"—is never explained. Are Chase and Pelfrey suggesting that an out-of-control media frenzy, aided by loudmouth extremists, can alter public discourse beyond all reason and convince the masses of absolutely anything? Maybe, but in encasing that provocative notion in such a proudly absurd, impossible framework, they undercut their own arguments. If you have to veer this far away from the truth to make fun of it, your satirical thrust is blunted. And the Winkie-giving-birth plot adds to the absurdity, existing solely to set up a contrived immaculate-conception metaphor. I chuckled for maybe two-thirds of the ride, but by the time Winkie was on the stand testifying about teddy bear poop, they'd lost me.

There's pleasure to be had along the way. Swipes at real-life celebrities and politicians are generally deft. I particularly liked the riffing on Chris Matthews and his inability to interview anyone without interrupting them. Director Joe Tantalo's staging is lively and clever, situating the audience on three sides and a giant American flag on the fourth, with the cast standing motionless and facing it as we enter while patriotic and religious anthems peal away. Elizabeth Rhodes' sound design is terrific, as is Maruti Evans' lighting, with Winkie on trial in a dramatic center spotlight.

Winkie is played by an actual teddy bear, but Nick Paglino, as Chase, also voices him excellently and manipulates him expertly. (Winkie doesn't start speaking until well into the narrative, suggesting that maybe Chase and Pelfrey are trying to delay the skepticism we'll feel when he finally does open his mouth.) Adam Kee, as Winkie's hapless attorney, is in hilarious early–Gene Wilder mode, stuttering and miserable in a rumpled suit and an awful tie. As Chief Reynolds, Winkie's far-right nemesis, Gregory Konow pounces a little too hard on a familiar type, and Elliot Hill's vacuous TV journalist isn't exactly a fresh take on a ubiquitous source of mockery. But Geraldine Johns is touching as Winkie's nurse and protector, and Rick Sordelet has staged some bracingly intricate stage fights.

Maybe I'm being too literal-minded and not getting into the proper anarchic spirit; many in the audience seemed to be having a wonderful time. But I wanted more-cogent plotting, less-repetitive dialogue, and a likelier hero than someone made of mohair, excelsior, and button eyes. Surely, in these days of Glenn Beck and Scott Walker and the Tea Party and God knows what media horror around the corner, we don't have to wander so far afield of reality to make sport of it.