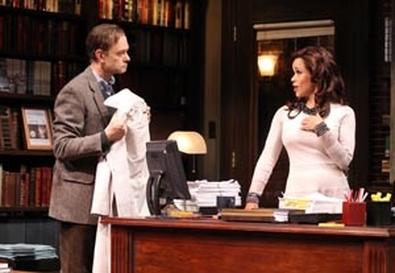 The evening starts out with a bang: David Hyde Pierce is a ruthless book editor ripping apart a series of letters from his misbehaving daughter's headmaster. No one is better at playing sharply intelligent characters flummoxed by their pesky feelings. Remember all those marvelous moments on "Frasier" when Pierce's Niles was unable to use his keen wit to manage a situation involving emotions and hilariously lost his hard-won composure? Here, Pierce's Paul attempts to apply his considerable skill at compressing and refining prose to increasingly hysterical missives crying for him to remove his outrageous offspring from her boarding school. With every new email or letter, Paul's corrections and comments are harsher, and the actor delivers them with an escalating sense of hysteria before reaching an explosion of ire and red ink. Unfortunately, those first few minutes of Molly Smith Metzler's "Close Up Space," presented by Manhattan Theatre Club, are the production's funniest. It goes downhill from there.

This is a huge disappointment, as the playwright's "Elemeno Pea," seen earlier this year at the Humana Festival at the Actors Theatre of Louisville, was such a delightful combination of wit and pathos. The characters in that play, about clashing classes in the Hamptons, were written with humor and keen observation; here the characters are stick figures ready for a sitcom.

The contrived plot is one we've seen many times before, both on stage and the small screen, with the protagonist beset by a series of crises set in motion by cartoonish friends and family. Paul is coping with the recent death of his wife; the unexpected arrival of his unruly daughter, Harper; Vanessa, a temperamental romance novelist who is making sexual advances while resisting his edits; Steve, the goofy office manager, who is camping in the reception area after hours; and Bailey, the new intern, who disappears as soon as the character has fulfilled her function of helping out with the exposition.

There are a few stray laughs, but Metzler's characters exist as excuses for punch lines and setups for weird situations, so the humor is forced rather than organic. For instance, Harper initially communicates only in Russian and pulls snowballs out of a cooler to hurl at her father. That's potentially funny, but the motivation for her eccentricities—she identifies with Soviet poets and their icy homeland because of her mother's passing and her dad's neglect—seems like a pasted-on gimmick. The playwright is more interested in the silly accents and props than the reasons behind them.

Director Leigh Silverman and a game cast try their level best to breathe life into this jerry-rigged script. Pierce brings his considerable skills to bear to push Paul beyond the fussy, neurotic stereotype, but he receives little help from the author, and there is no chemistry between him and Rosie Perez, turning in her usual spitfire shtick as the flighty author. As Harper, Colby Minifie fails to deepen the hot-tempered caricature, and Jessica DiGiovanni's Bailey vanishes before the actor has a chance to do much of anything. Michael Chernus miraculously manages to make the idiotic Steve endearing by zeroing in on the character's objective—regaining the love of his dog, who is "cheating" on him with his roommate—without pushing too hard for laughs. If the author had employed a similar focus, "Close Up Space" wouldn't be so thin and unfunny. Nice, detailed set by Todd Rosenthal, though.