Co-Artistic Director Ellen Lauren on the Ethos of SITI Company 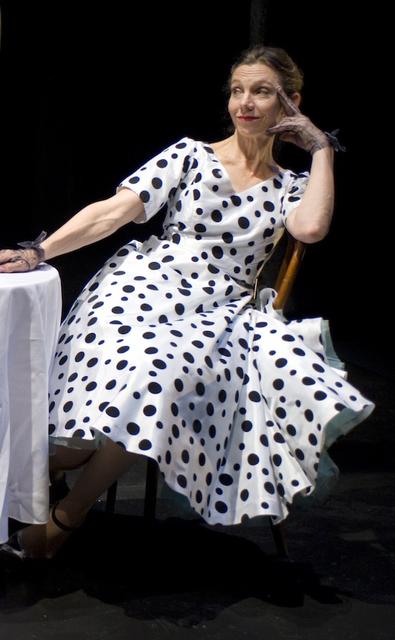 Ellen Lauren has been with the SITI Company since its inception. Now entering its 23rd year, the founding member and co-artistic director finds her approach to the craft has remained consistent but still has consistently left enough space to welcome new ideas.

Based in the very physical Suzuki method, which draws from modern ballet and arts, and the Viewpoints method, SITI Company offers actors a conservatory perspective coupled with a worldly view, as well as workshops and training programs. The SITI Company itself, which has kept its same members from the start, has expanded across the world with intensives everywhere from Madrid and Finland to North Carolina and San Francisco, and soon, Bulgaria.

For SITI it’s all about “answering the question of how to create a poetical space that only theater can create, but with the optimum awareness humanity and skills,” Lauren explains. “We say we’re a classic company wrapped in a post modern bow.

“Looking at my colleagues and all that we’ve accomplished together, I’m so moved by the breadth of the experience alone. We are now an international center where we bring people from around the world together. We’ve built a network of theater artists that can get in the room and make work quickly because of their common experience at SITI.”

Lauren talks to Backstage about the methods the company implements, the problem with many acting training programs, and the differences she sees in the company over its 23 years.

On the SITI Company’s approach to the craft.
“I think what we’re interested in is the collision between the unconscious and the invisible world that exist in all humans—the fantastical side that we all reside in, as well as the very real perceptible and artistic approach to dealing with issues of time and space,” Lauren explains. Adapting the Suzuki and Viewpoints methods separately but in concert with one another, she describes one as a very horizontal approach and the other a lateral one. “But if you had to boil it down to one word, SITI is about collaboration. The way we run not only our rehearsals reflects into our business models and how to extend that out through working life. We want to be a center for all theater artists to come and not do what we do, but help with ways to get people what they have to say into the world in a efficient way.”

What else helps aid the vigorous ethos of theater? A sense of humor, according to Lauren.

On still being in the company more than two decades later.
“It’s not utopia and not without its problems or conflicts,” she says. “In our world today money is always a finite thing, as are the issues of growing old together. But the training is a medium for which to allow change in each other and still have a commonality that irrevocably links us.”

Lauren says this is what allows the core founding members of the company not only to adopt an unconventional co-director leadership, split among Lauren, Anne Bogart, and Leon Ingulsrud, but also to welcome younger generations into the company and remain open to what new-age nuances they may bring to the approach of the craft.

“It’s all about making work, new work, and reinvigorating work, which rests heavy on an actor and directors both to have a classical sense and draw from the past, and create work in a contemporary modern world,” she says. “We have to pull those things together, and for the most part those things are not addressed or talked about in today’s training programs. [SITI] doesn’t have the answers but we’re engaged in active research. We delight in how the new generation comes in and teaches us what we don’t know through the work we do know.”

On how the SITI Company training program is different from others.
“It’s a rigorous physical form,” she says about the company’s training, “but it’s based in metaphysical ends because it is artistic preparation—it isn’t sport, so to speak.” According to Lauren the program’s vocabulary draws from dance, performance art, ritual, Greek theater, Japanese theater, and traditional training forms. Focusing on controlling the body’s center or core to draw strength, balance, and control—both emotionally and physically—is a major focus of the Suzuki method.

“When it was being developed, the actors in Suzuki’s company were drawing on anything that worked that created a heightened sense of reality on stage,” Lauren explains. “It forces you to take your inner gaze towards yourself as well as moves the outer gaze toward your audience.

“[Many training programs] deal with physical or emotional entry points, which is subjective. When actors are not asked to do things to really reach down, down, down, we don’t reach our full potential. It’s a disease in this country where actors aren’t being asked to reach deeper than their own personal reference points; those are important but if left to just those devices, the work stays narrow.”

Lauren describes the company approach as a pushing of “the language of time and space into the foreground” so as to have a common way of approaching “the poetry of the stage.”

Briana Rodriguez
Briana is the Editor-in-Chief at Backstage. She oversees editorial operations and covers all things film and television. She's interested in stories about the creative process as experienced by women, people of color, and other marginalized communities. You can find her on Twitter @brirodriguez and on Instagram @thebrianarodriguez
END_OF_DOCUMENT_TOKEN_TO_BE_REPLACED