'Coney' Is a Welcome Theatrical Tonic 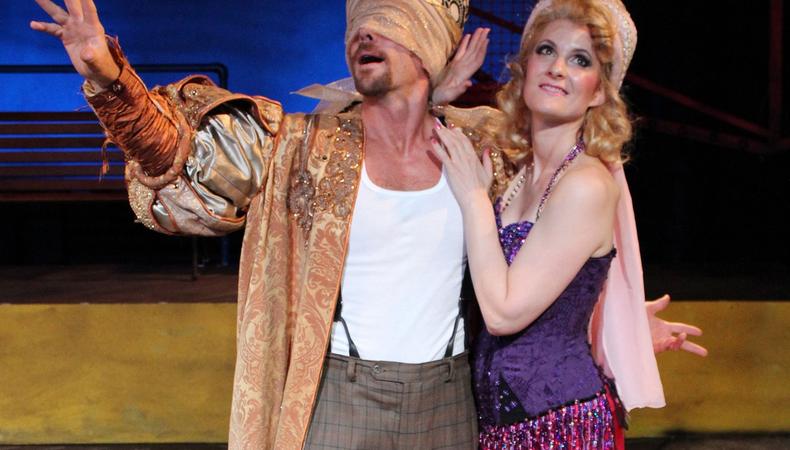 Sometimes timing is everything, and after the battering New York has taken from Hurricane Sandy and an unseasonable early snowstorm, David Johnston’s lovingly sunny “Coney” is a welcome theatrical tonic. Though not everything in this quirky ode to life along the boardwalk and beach of Brooklyn’s fabled summertime mecca shines, the show, directed with sensitivity by Gary Shrader, casts an overall glow that charms.

Unfolding over the course of a summer afternoon and early evening, Johnston’s episodic play offers a portrait of a Coney Island that’s filled with not only the folks who eke out their existence among the decaying amusement park attractions but also long-term Brooklynites who’ve grown up with the place as their backyard and other New Yorkers who visit, hoping to capture some of the magic they’ve heard exists there. Ultimately, this collage of interlocking narratives provides both a wistful look backward toward the place’s heyday and a saddened glance at its future in the hands of 21st-century developers.

Johnston’s dialogue consistently impresses. He can convincingly capture the looping, non sequitur–filled chatter of two men who spend their golden years at the shore and the awkward patois of two teenagers who’ve come to Coney Island for a first date. Generally, his dramaturgy evidences a similar sense of sureness, but when he attempts to infuse the play with action—a late-in-the-play confrontation between two characters who’ve just met rings utterly false—“Coney” briefly misfires.

The 14-member ensemble mines the richness of the material, and the production—which unfolds with ease in an environment from set designer Kerry Lee Chipman that telescopes into one space locations ranging from the sandy beach to the famed Wonder Wheel—is filled with flavorsome and immaculately rendered performances. Perhaps most impressive is PJ Sosko, as a barker for—and a performer at—the freak show. Sosko brings a terrific blend of stubborn machismo and wounded vulnerability to this character, who’s hoping to start a family with his stage partner and sometimes girlfriend Tiffany (Amy Staats). Similarly, Staats’ work zings with a faux toughness that Tiffany has developed as a means of protecting herself.

Among the visitors is divorced workaholic dad Robert (Stephen Speights), who’s brought his privileged, snooty daughter Marni (Jillaine Gill) to the seaside for their weekly get-together. During an early scene the actors’ work crackles with tension, and after Marni storms away from her dad in a teenage fit Gill is touching as she reveals layers of pubescent confusion and almost childlike innocence in her character.

Frank Anderson, George C. Hosmer, and Andrea Gallo bring affection and spot-on comic timing to their portrayals of older denizens of the area; Alex Carmine and Eboni Booth utterly beguile as a geeky teenage boy and his sweetly doting date; and Boo Killebrew gets the evening’s biggest laughs in her fiery southern-fried portrayal of Trixie the Human Tripod. Ultimately, “Coney” offers a group of characters, performances, and stories that should leave theatergoers beaming.