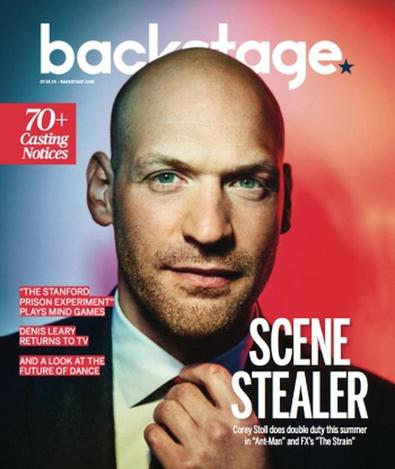 If you ever wonder about the difference between acting on the stage and acting for the camera, just remember Corey Stoll’s simple advice: “When you’re in a theater, it’s about reaching the back rows. When you have a camera in your face, it’s just about knowing the size of the room.”

That’s a particularly apropos comment given the actor’s role in the next big-screen installment from Marvel Studios. As the nefarious Darren Cross, aka Yellowjacket, in “Ant-Man,” he has the ability to shrink down to the size of an insect while retaining human-level strength. He and the titular superhero brawl in rooms of wildly varying sizes, enabling Stoll and co-star Paul Rudd to spar as actors in what was for all intents and purposes a playground.

“It’s so much fun,” says Stoll with an almost guilty grin. Over a dirty martini in Manhattan’s famed Bar Centrale, the actor describes what playing a comic book supervillain entails. Yes, you have to hit the gym, “if only for the behind-the-scenes footage when you’re in your unitard, so you don’t look too bad,” Stoll says with a chuckle. “You’ve gotta fill that out.” And yes, Darren Cross has several blustery soliloquies—“He’s a bad guy, he has to have his monologues!”

Mostly, being the Big Bad means swinging for the fences. Despite the big-budget CGI, Stoll describes “Ant-Man” as the closest he’s gotten to performing theater in a film role. “The set is just gargantuan, this James Bond–like set,” he says. “It goes on forever and it’s so cool. It was a license to have my performance [be] the size that you can’t do when you’re doing naturalistic drama in a living room.

“What’s really fun as the villain is working to get the audience to hate you,” he adds. “At least for me, it’s something I fought actively against for a while, my ‘Like me!’ instinct. It can be exhausting and limiting and sentimentalizing and humorless.” 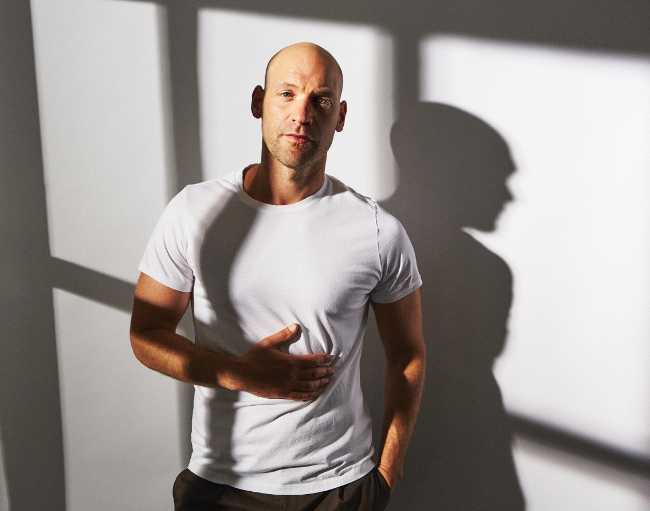 Yet Stoll, whose background at Long Lake Camp for the Arts and NYU Tisch consisted mainly of theater training, is the kind of actor who on the big screen can instinctively walk the line between hatefulness and empathy. Darren Cross is a sociopath, he explains, but his “soft, gooey, insecure center” is dying for the respect of his father figure, Michael Douglas’ Hank Pym.

It’s a delicate balance, Stoll says; the antagonist in any film can’t lean too hard in either direction. “The good guy is only as strong as the bad guy. If the audience sees from the get-go that I’m just this gooey mess seeking my father’s approval, if I’m really kind of a loser, I’m not going to be scary and Ant-Man isn’t going to be the hero.”

Stoll was indeed scary, as “Ant-Man” director Peyton Reed can attest. During a confrontational scene opposite Douglas, he remembers, “I was blown away by how quietly intimidating he was—to Michael Douglas, of all people!” After shooting a couple of takes, Douglas turned surreptitiously to his director. “Michael said, ‘Damn, this guy is good.’ He was rattled by him. [Stoll has] presence; it’s something an actor either has or doesn’t have.”

“I think the hardest thing for an actor to do, particularly on film, where you see everything, is be both simple and interesting at the same time,” says writer-producer Carlton Cuse. “Corey manages to achieve that.” As Dr. Ephraim “Eph” Goodweather on Cuse’s FX hit “The Strain,” cable’s top prime-time scripted first-year series in 2014, Stoll leads a cast of vampire slayers trying to save New York City. His performance guides the audience through fantastical, often grisly horror; Stoll is at his best anchoring extraordinary circumstances as an ordinary man.

“He’s utterly authentic, even on a show like ours, which is very much larger than life,” says Cuse. “He’s looking to actively collaborate with the director and his fellow actors, striving in a way to make every moment as good as it could be. And I find everything he does so arresting. He just holds your attention.”

As with Darren Cross, Stoll juggles larger-than-life with subtlety on “The Strain,” showing us glimmers of Eph’s inner demons—namely alcoholism—while he battles actual demons. In the show’s early stages, Cuse and co-creators Guillermo del Toro and Chuck Hogan sought to differentiate Eph’s addiction from that of Stoll’s best-known role: Rep. Peter Russo on Netflix’s “House of Cards.”

“I thought he was asked to do some things, particularly playing drunk, that can be clichéd, and he managed to put such an interesting, believable spin on it,” says Cuse. In an ensemble of irresistibly compelling actors, Stoll’s take on the perpetually self-defeating politician gave the show’s first season its backbone; his struggle for respectability hearkened back to Greek tragedy even as it grounded “House of Cards” in today’s cruel realities.

Asked how he taps into these different characters’ self-control or lack thereof, Stoll points out that “there’s no one addiction. It’s a very personal thing. There are some people whose relationship with the subject of their addiction...it’s incredibly fraught and they fight with it with all their might; each time they think they’ll defeat it they won’t. And some know they won’t have any power over it. There are as many addictions as there are people.”

If there’s a through line in all of these performances (to say nothing of his magnetic work as Ernest Hemingway in “Midnight in Paris” or as a retired boxer in Noah Buschel’s “Glass Chin”) it’s Stoll’s aptitude at finding the opposing tensions tugging at each character. Peter Russo’s addictions undermine his political ambition; Eph must give in to his in order to lead; Darren Cross projects anger but is driven by insecurity. “I find the contradictions are the most fun to play,” Stoll says, although he’s hesitant to claim it’s a technique that works every time. “I can’t say I have a way that I approach every role. And for a while I sort of beat myself up about that.

“It’s important not to put something on top of your first instinct, because those are so valuable and you’ll never get that first impression again, of reading a script or imagining yourself in the role. To try to put this whole process on top of that can be limiting.” Generally speaking, though, he relies on instinct in tackling a role, and when a problem appears, he pulls out actorly tools: sense memory, improvisation, creating a backstory. “I think that’s generally how I work. I don’t know if that’s just laziness or what!”

Listening to his initial instincts during his “Ant-Man” audition, Stoll realized he could use an unexpected aspect of his theater background as inspiration. “Darren Cross actually fits into the mold of the Il Capitano character in commedia dell’arte,” he explains. The stock character from 16th-century Italian theater, signified by a mask with an elongated nose, brags about wars he’s fought and women he’s conquered, but trembles when confronted with either.

“I remember being in that class with my chest out and my shoulders back and my knees weak,” Stoll says, and with that physicality in mind, Darren Cross became as natural a fit for Stoll as any of his other characters. As he says, “Something about that is funny and human and true and poignant and universal. You don’t really need to put a finger on what. It just is.”

Jack Smart
Jack Smart is the awards editor at Backstage, where he covers all things Emmy, SAG, Oscar, and Tony Awards. He also produces and hosts Backstage’s awards podcast “In the Envelope” and has interviewed some of the biggest stars of stage and screen.
END_OF_DOCUMENT_TOKEN_TO_BE_REPLACED