The Creator of 'Smash' Knows Her Way Around a Play 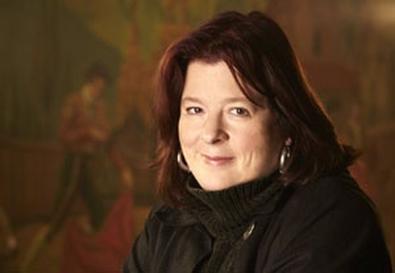 Before sitting down for an interview last week, Theresa Rebeck quickly huddled with her assistants, telling them she's decided on which song she wants used at the top of the show, scheduled to air deep in spring.

The song — "There's No Business Like Show Business" — will be performed while a still-to-be-filmed montage plays of stage workers packing up equipment and props and loading them onto trucks so that their Broadway-bound musical can first get a tryout on the road.

"I feel like at that point, we've earned a big old classic standard like 'There's No Business Like Show Business,'" says Rebeck from the show's offices in a converted factory in Brooklyn's Greenpoint neighborhood. "We actually don't do a lot of that big, old-fashioned, these-are-our-roots things."

The series tracks the genesis of a Broadway musical about Marilyn Monroe from multiple perspectives, including those of composer and lyricist, producer and director-choreographer, and the two rival actresses competing for its title role.

Little on "Smash" escapes Rebeck's attention, whether it's the songs, dialogue or plot. She's the creator, executive producer and chief writer for the highly anticipated NBC show that begins airing Monday night.

"I don't sleep much anymore," she says, laughing.

Rebeck, 53, is perfectly cast in her new role: She's a former actress, a widely produced playwright and a Peabody Award-winning TV writer who knows a thing or two about putting on a Broadway show. One of her newest plays, "Seminar," starring Alan Rickman, is currently getting cheers on Broadway.

"She knows how to generate brilliant material, she knows when it's working and when it's not and how to fix it. She knows how to listen to her collaborators but also know how to stand up for herself," says Gold.

"Smash" stars Megan Hilty and Katharine McPhee as the feuding actresses, Debra Messing and Christian Borle as the book-and-song writing team, Jack Davenport as the quick-to-scream director and Anjelica Huston as a feisty lead producer.

Original songs have been supplied by the real-life songwriting team of Marc Shaiman and Scott Wittman, who penned the music and lyrics to such shows as "Hairspray" and "Catch Me If You Can." Covers and standards round out the soundtrack.

"I think you can expect great songs and pretty girls and people doing inappropriate things and having to live with the consequences," Rebeck says. "It should be a great nighttime soap with really interesting people."

Using the creation of a show-within-a-show as the skeleton for a TV series that explores the behind-the-scenes drama of Broadway may initially seem to have a limited reach, but Rebeck points to the popularity of theater far from New York.

"Theater is more universal than it's given credit for being. I don't think it's precious," she says. "This isn't merely about Broadway. It's about the yearning of the human heart to be part of a community telling a story."

Rebeck says her new show is like "Lost" or "The West Wing" — series that were grounded in interesting people. She identifies herself as a "character person," and she has created memorable ones even in procedurals like "NYPD Blue," ''Law & Order: Criminal Intent," ''Canterbury's Law" and "L.A. Law."

"Smash" features theater professionals on both sides of the camera — Michael Mayer, who directed "American Idiot" on Broadway, directs the series — and inside jokes that only hard-core theater fans will get, like the appearance of Jordan Roth, president of Jujamcyn Theaters, in an Episode 2 cameo. Guest appearances will be made by Bernadette Peters, Nick Jonas, Uma Thurman and Norbert Leo Butz.

The high-profile TV show is just the latest project in Rebeck's busy schedule. She's still enjoying the glow of strong reviews this winter for "Seminar," her witty look at the soul-torturing world of authors, and another of her plays, the comedy "Dead Accounts," had its world premiere in January at the Cincinnati Playhouse in the Park.

Creating a TV show about putting on a Broadway show is right in Rebeck's wheelhouse, but she says she's not taking advantage of the project to settle personal scores, even if she has drawn on events from her own career.

"Have I had experience with directors who yelled too much? Yes. You bet. We all have. There are situations I've pulled, cruel things that people have said, that make it into the script," she says. "Sometimes I just toss things that happen to me into the script, but not people."

The TV series was proposed by Steven Spielberg and championed by Robert Greenblatt, now NBC's entertainment chairman. While casting around for potential writers, Spielberg came across Rebeck's play "The Understudy," which is both a valentine and a sendup of commercial theater, and knew he had to reach out.

Rebeck says both Spielberg and Greenblatt have insisted on her being the show's main creative force and generally have stayed out of her way, unlike producers of other TV shows who constantly meddle.

"I don't feel bullied or undermined by those guys. I feel like I am the general," she says. "I think that really great television can be made when you adopt a slightly more theatrical model."

Rebeck, whose other plays include "Mauritius" and "Omnium Gatherum," has also written the novels "Three Girls and Their Brother" and "Twelve Rooms With a View." The Cincinnati-raised playwright with two master's degrees from Brandeis University also has written feature films, including "Harriet the Spy" and "Gossip."

If her new TV series is successful, Rebeck might actually be adding it to both her TV and playwright credits: There's talk of mounting a real stage version of the pretend musical about Monroe that the TV series is creating.

Rebeck admits that she's thinking about possible plotlines for Season Two of "Smash" even as she puts the finishing touches on the first season. "I would be crazy not to be thinking about next season," she says. "I have some exciting ideas."

NBC, desperate for a hit, will be looking hard at the ratings before making a decision on extending "Smash," but Rebeck says she doesn't feel overly stressed: "The pressure on me is to deliver great episodes. I can't think of anything beyond that."