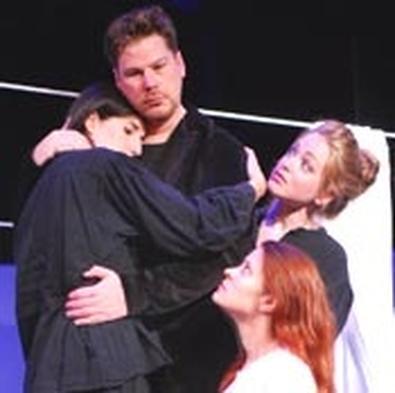 The Crucible, adapted by composer Robert Ward and librettist Bernard Stambler in 1961 from Arthur Miller's play, may be one of the most musically and dramatically charged contemporary operas and probably deserves far more performances than it receives. But to watch Dicapo Opera's production is to catch the work's potential and not quite the full effect.

Miller's familiar story of the young girl who cried witch, prompting the Salem trials, lends itself naturally to music, and Ward does it justice. Lyrical lines, lush textures, and a heavily tonal score lend accessibility, while some unexpected rhythms and orchestration choices maintain interest and, where necessary, weirdness. Conductor Pacien Mazzagatti leads with intelligence and authority, effortlessly pulling off difficult passages and culling a clean, brilliant sound from the orchestra.

John Proctor, husband of the accused Elizabeth Proctor and one-time lover of Abigail Williams, can easily be imagined as a burly, tragic baritone, and Elizabeth, ever reasonable, a stable mezzo-soprano. Ward's conceptions are fitting, but the music is often weighty, making vocal power a paramount concern. In this regard, Zeffin Quinn Hollis meets the role's challenges, but otherwise he is stiff and oddly unimposing. As Elizabeth, Lisa Chavez displays a rich, plangent voice and strong connection to the music.

Abigail Williams and Mary Warren are operatic divas in the intense, mad-scene tradition. Ward takes an unusual tack in the vocal writing — instead of casting hysteria in the hyperfeminine upper limits as is typical, he relies heavily on the lower reaches, down to the chest voice. Instead of shrill and pathetic, he gets eerie and husky, made even stranger by leaps back up to the traditional soprano realm. The question of whether or not the young women are possessed gains all the more potency.

The performances of these two roles are superb. As Abigail, Marie-Adeline Henry shows off a deep, full-bodied voice with the earthiness of a contralto and a soprano's range. She dominates the large cast, which is essential to her part but no small accomplishment. Lynne Abeles' Mary Warren is spellbinding in her bug-eyed fear and desperation. Abeles also sings assuredly, her vocal control all the more impressive for her theatrical abandon.

The production itself seems to hold back its singers. A modern take casts both stage and characters all in black and white — a black stage with varying levels for Rev. Samuel Parris' house, white sheets hung from a clothesline for John and Elizabeth Proctor's first scene, long black dresses and pants with stark white faces for all. A coolness sets in, visually striking and appropriate for the Puritan ethic but occasionally taken too far by director Robert Alfรถldi and the cast.

Throughout, Elizabeth's hard exterior is exaggerated to the point that it alienates the audience, not just John, and John's temper and Abigail's rebellious sexuality are underplayed. Also, the women believed to be possessed by the devil could be portrayed more creatively than through an Exorcist-style crab walk. In ensemble scenes, however, Alfรถldi's talent shows through, particularly during Abigail's initial "conversion," the trial, and John and Elizabeth's wrenching final moments.

Supporting performances range from passable character singing to glimpses of radiance that make one wish to have seen more, namely those from tenor David Gagnon as Parris and soprano Nicole Farbes-Lyons as Tituba.