'A Crucible' Fails to Turn Miller Into Mayhem 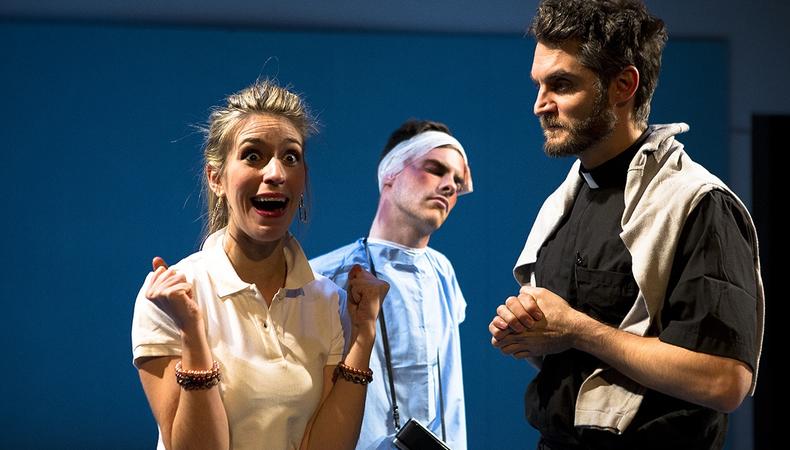 January is the unofficial month of experimental downtown theater, what with the Under the Radar and Coil festivals in full swing. But they are not the only game in town. The Wild Project is hosting Perfect Disgrace Theater’s production of Brian Bauman’s “A Crucible,” which purports to look at what happens when a Catholic high school stages Arthur Miller’s classic play about the Salem witch trials. Bauman flaunts his bona fides in his program bio by quoting Suzan-Lori Parks’ assessment of his writing as “thrilling, sexy, political, and rude. He’s making provocative, in-your-face theater—not for the timid, or, perhaps, just what the timid need.” Director Kate Gagnon’s entry speaks of her desire to develop “bold new work.” So why is “A Crucible” so ordinary, attenuated, and just plain dull?

Bauman conflates squabbling parochial schoolgirls and a homosexual priest whose star pupil, Randy, has been gay bashed and lies in a coma with not only Miller’s drama but his script for the film “The Misfits”; its stars, Marilyn Monroe, Montgomery Clift, and Clark Gable; Andy Warhol and his assailant, Valerie Solanas; Richard Schechner’s orgiastic Off-Off-Broadway production “Dionysus in 69”; TV host Maury Povich; and the 2008 news stories about the “Gloucester pregnancy pact,” in which a group of teenagers supposedly chose to get pregnant and raise their fatherless children together. Thin naturalistic scenes alternate with the usual grammar of direct unison address, episodes of stylized movement, angry music, and video. It sounds like a promising recipe, but I’m afraid the dough never rises.

The best thing about “A Crucible” is its enthusiastic cast of nine, whose energy and commitment are never in question. Heather Litteer, onstage as the audience arrives, is arresting as she turns a repeated scrubbing of the stage floor into a glaring lap dance (though why she confines herself to one spot is puzzling). Michael Brusasco is amusing as Father John tries to prevent—with only limited success—his inner Marilyn from emerging. Robb Martinez is both funny and affecting as Ronald the Drunk From the Living Theater, a former actor who’s now homeless but gets cast as John Proctor in Randy’s place because Proctor was his audition monologue. (There’s a lot of Living Theater shtick, which I seemed to enjoy more than the rest of the audience, possibly because I worked with Judith Malina and Julian Beck a mere 30 years ago.)

Haley Rawson is appropriately dominating as the girls’ ringleader Happy, Rebecca Kopec shines as her Manhattan-dwelling subversive lesbian Aunt Ida, and Emma Ramos is a wickedly accurate casting director. Outstanding is “avant-garde celebrity” (those bios again) Chris Tyler, who, as Randy, spends much of the evening with his face covered in blood while being wheeled about on a hand truck clad in a hospital gown. Tyler is impressive in his focus and in the myriad ways he finds to comment on the action swirling around him.

It takes invention and discipline to create effective theatrical chaos, qualities far too absent in “A Crucible,” which is overlong at nearly an hour and 45 minutes and desperately in need of an editor. Nothing undermines anarchy more than anarchy.