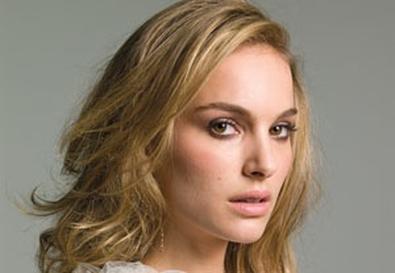 Photo Source: MA Photo Management And Artists
Though she has been an actor for the better part of her 29 years, Natalie Portman admits there was a time when she wondered if she should choose a different career.

Portman recalls, "There were moments when I questioned it, when I was thinking, 'What is the purpose of this in our world? Is it as meaningful as being a doctor, being a teacher, or things that I think of as such noble professions?' But I think I've really reconciled myself with that, and I think art is not only important but critical to the soul of a human and the soul of a community. Not to be self-important about what I do, but I've found a lot of meaning in it." That said, she recognizes a certain degree of "silliness" to what she does. "There really is something ridiculous about dressing up and pretending to be someone else," she says with a laugh. "But I think it's wonderful to do something in life that's a little bit silly."

There's nothing silly about Portman's performance in "Black Swan," for which she has earned her second Oscar nomination and some of the best reviews of her career. Portman is sublime as Nina, a sheltered ballerina who finds her fragile mental state crumbling when she lands the dual roles of the innocent White Swan and the sensual Black Swan in her company's production of "Swan Lake." Pushed by a demanding director (Vincent Cassel), a devious rival (Mila Kunis), and an overbearing mother (Barbara Hershey), Nina descends into paranoia and madness, vividly brought to life by Portman's performance and director Darren Aronofsky's stylized storytelling.

Though she may go through hell on screen, in real life things have never looked better for Portman. She recently announced her engagement to Benjamin Millepied, who appears as her dance partner in "Black Swan," and they're expecting their first child. The drama "The Other Woman," which she produced and which premiered at the Sundance Film Festival in 2009, is opening in limited release this week. And after the intensity of "Black Swan," she lightened up with two comedies: "No Strings Attached," which she also produced and is now in theaters, and the upcoming "Your Highness" opposite James Franco and Danny McBride. Later this year she will be seen in Kenneth Branagh's screen adaptation of the comic book "Thor." These films have been a chance for Portman to show her range in a wide assortment of projects—a variety she says she has always intended to maintain. "I think it's good to stretch yourself and test out different genres and types of characters. It's what my heroes do. I look at Meryl Streep and how she goes from 'Doubt' to 'Mamma Mia!' to 'It's Complicated' and 'Julie & Julia.' You have to give yourself variety and joy," Portman notes. "And really, I just want to make the kind of movies that I would want to see."

Portman was born in Jerusalem but moved to the U.S. when she was 3 years old, eventually settling in Long Island, New York. Though her family wasn't in the business—her father is a doctor and her mother teaches at a nursery school—Portman says they were always active in the arts. "I grew up going to every museum and every theater production," she recalls. "We would stand in line for the half-price tickets in Times Square and see shows and concerts and dances. So I had an appreciation for the arts from a very young age."

From age 4, Portman was taking dance classes and attending theater camp; in elementary school she performed in "The Music Man" and played a munchkin in "The Wizard of Oz." Though she was mostly just being a kid, Portman admits that in the back of her mind she knew she wanted to be an actor when she grew up. "I think a lot of kids think that, so who knows if I would have changed my mind as I got older," she notes. "But then I started going on auditions at age 10, and then when I was 11, I got 'The Professional.' "

Making one of the most impressive debuts in film history, Portman lit up the screen in director Luc Besson's elegant thriller about professional hit man Léon (Jean Reno), who becomes the caretaker of his 12-year-old neighbor after her family is brutally murdered. As Mathilda, Portman had to learn the tools of the hit-man trade—loading guns and facing down the bad guys in a physically and emotionally demanding role. She recalls the casting process as fairly standard: She went through three auditions before landing the role and met Reno after only she was cast. Portman says their chemistry on screen was very natural and in many ways reflected their relationship in real life. "I remember Luc warning me, 'He stays in character, so don't be alarmed if he's not Mr. Happy Fun Guy all the time,' " Portman recalls. "So he did keep a certain distance, much like the character, but was always really nice to me. And just watching him work taught me so much."

Following "The Professional," Portman excelled in roles calling for a young woman wise beyond her years, sharing scenes with Al Pacino in "Heat" and Timothy Hutton in "Beautiful Girls." She also chose to pursue stage work, starring in the 1997 Broadway revival of "The Diary of Anne Frank" and a 2001 production of "The Seagull" with Streep. "I always want to return to stage," Portman says. "It's really an actor's medium, where film is a director's medium, and it's a place where you can learn a lot about yourself as an actor."

In 1999, she began studying at Harvard University and put her career on hold, though she was committed to playing Queen Amidala, mother of Luke and Leia, in the "Star Wars" prequels. Asked how she reached the decision to forgo work for education, Portman says, "It really didn't feel like a choice. It just felt like what I should do. Everyone in my family went to college, and everyone I knew from high school went to college, so it wasn't even a question for me. I realize now that maybe it was unusual, but I never considered not going."

Lady of the 'Lake'

While at Harvard, Portman first met with Aronofsky and discussed the idea about a film set in the world of professional ballet. She resumed her career upon graduation, landing an Oscar nomination for her work in "Closer" and taking the lead in such projects as the action thriller "V for Vendetta" and the period piece "Goya's Ghosts." But dancing was never far from her mind. Says Aronofsky, "Over the years, she would say, 'How's that project coming? I'm getting too old to play a dancer.' "

When Aronofsky presented her with the "Black Swan" script, Portman knew she would have to endure a grueling schedule. Much has been made of her physical regimen, which included extensive, eight-hour-a-day ballet training and a 20-pound weight loss. But even Portman was surprised by the psychological toll the film took on her. "It took a lot to plan and maintain focus constantly," she says. "And I'm a pleasure seeker by nature, so it took a lot of self-punishment to work through pain and to not eat what I wanted to eat and not sleep as much as I normally do."

Though the film has garnered comparisons to Roman Polanski's "Repulsion," Portman says the only movie Aronofsky suggested she check out was Michael Haneke's "The Piano Teacher," for the mother-daughter relationship. Portman says her approach to acting varies with each part; for example, with "Black Swan" she read countless dance biographies and trained physically. But with "No Strings Attached," there wasn't really any research to do: "You just sort of jump in and go with it."

And when a film is over, Portman says, she doesn't allow herself to be too critical—in fact, she avoids seeing herself on screen. "I watch a film once, then never see it again," she says. "I think it's dangerous to watch yourself. I think you can get too used to seeing yourself outside of your body. and it's important to see the world through your own eyes, not looking at yourself."

However, Portman notes, she will probably have to change that policy as she moves more and more into producing. "You have to see a film multiple times when you're in the editing process," she says. "But I think I can watch it through different eyes, as a producer." Portman has also dabbled in directing: Her short film "Eve" played the Venice Film Festival in 2008, and she wrote and directed a segment for the 2009 anthology film "New York, I Love You." She has her own production company, Handsomecharlie Films, and her producing partner Annette Savitch says they hope to produce a few raunchy comedies done from a female point of view. "Natalie wants to build something that's different from your usual production company," Savitch says. "We want to do movies that are female-driven, from a fresher perspective. So if it's a comedy, it's not just about women out to find husbands. I think that's really lacking today." Two films on the docket include the road trip comedy "Best Buds" and "BYO" (which stands for "Bring Your Own"), which Portman co-scripted with her friend Laura Moses and which has been described as a female "Superbad."

Portman intends to do more directing and producing, and is very open to producing a film she doesn't appear in. That may include the film adaptation of the literary mash-up "Pride and Prejudice and Zombies," which she was previously set to star in but ultimately left the project as an actor. "I just thought I was too old for the role," she says. "It's about a young woman who's unmarriageable and everyone is trying to pair off, but she's refusing to be a zombie like the rest of the women in her town. I'd just sort of grown out of the right age for it." Portman remains involved as a producer and hopes it will be her first project in which she doesn't appear as an actor. "You don't get the opportunity to produce right away," she notes. "You usually have to act in the first few things before you can segue out of that."

Portman recognizes she's the rare actor who began her career young yet managed to not only continue in the business but thrive. For this, she largely credits the apathy of those closest to her. "It's important to have parents and friends who are normal and don't really care what I do," she says, before laughing and correcting herself. "I mean, they're proud of me, but they don't care if in the industry I'm up or down. They're equally my friends, whether I have a hit out or a flop. That has really saved me."

-Additional films include "Garden State," "Cold Mountain," "The Other Boleyn Girl," and "Brothers."

-Stars in the video for Paul McCartney's "Dance Tonight," directed by Michel Gondry, and the short film "Hotel Chevalier," a companion piece to "The Darjeeling Limited," directed by Wes Anderson