Dancing Their Way to Injury 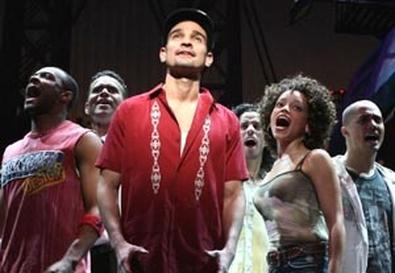 "It was never a specific moment in the show where I said, 'Ouch,' " says Rickey Tripp, an ensemble member in Broadway's "In the Heights." The tendonitis in his hip that forced Tripp to leave the show for a whopping 10 months was a product of repeated stress on weakened muscles.

Tripp is among a growing number of professional dancers who accrue injuries due to the physical demands of the job. According to professional dancer Allyson Tucker, the demands of ensemble members, specifically, have increased in part because shows no longer employ separate dancing and singing choruses as in the 1950s, '60s, and '70s. Current ensemble members have a lot more stage time, which provides more opportunity for injury. As the environment and schedule of the professional dancer intensifies, the body morphs in potentially damaging ways to attempt to maintain its health.

Most recently, an unmanageable amount of injuries in the cast of Broadway's new hit musical "Fela!" led the lead producer, Stephen Hendel, to cancel a weekend performance in the early weeks of the show's run. The dance captain, Daniel Soto, along with two ensemble members were each afflicted with a different type of injury, rendering them unable to perform. "Billy Elliot," another strenuous dance show, cast no less than five young actors to handle the leading role of Billy because of the part's intense physical demands and subsequent risk of exhaustion or injury.

Injury risk remains difficult to predict because of the long list of factors that contribute to it. According to Megan Richardson, a licensed physical therapist at the Harkness Center for Dance Injuries at New York University, dancers deal with not only the effects of intrinsic factors such as diet, sleeping habits, stress level, and injury history but also a growing list of extrinsic factors, such as stage conditions, costume weight, and grueling performance schedules.

Tucker adds that the advance of technology has led theaters to update their stages to support increasing demands for larger, heavier scenery and hydraulics for automated set movement. But meeting the needs of modernity can be detrimental to the performers" needs. The surface on which dancers perform can cause wear and tear on the body. "Surfaces that are more resilient, that absorb more shock are going to be less hard on the body," Richardson notes. "So a sprung floor, a wood floor, those are going to be a little less intense than a concrete slab." Unfortunately for dancers, performance spaces favor concrete and steel. "The amount of concrete and steel just getting to the stage on stairs is tearing apart people's bodies," Tucker says, adding that working on such hard surfaces can shorten a dancer's career.

What's more, dancers on tour may have no choice but to perform on multiple stages built from a variety of such materials. Jason Veasey, cast member of the touring production of "Disney's The Lion King" says these stages are "not really conducive to a lot of jumping around."

And that's just the flat surfaces. The ever-popular raked stage, currently used in Broadway's "Billy Elliot," may contribute to injury risk. Raked stages place performers on a tilted surface, typically sloping up and away from the audience for better viewing. One study from the Journal of Dance Medicine and Science concluded that "professional dancers performing on 'raked' (inclined) stages sustain more injuries than dancers who perform on flat stages."

"If you tend to adapt to that incline surface in a way that puts your pelvis in a non-neutral position, we can experience increased compression or tensile forces in parts of our body," Richardson says. "Your postural habits may produce some changes within your body, and that may cause some increased risk."

Stage conditions and the accompanying risks vary among venues and jobs. However, the unavoidable circumstance of dancing professionally—the damage of repetition—predisposes dancers to injury at the most basic level. No matter the venue, dance style, or job, all dancers repeat the same choreography multiple times a week. Richardson says, "Sixty-five percent of injuries that happen in dance are from overuse, and overuse injuries are from that repetitive stress…wearing down of the tissues that have been stressed and overutilized," as was the case with Tripp.

The choreography of "In the Heights" relies heavily on hip-hop. "That genre is not meant to be done eight times a week," Tripp says.

The specific demands of the hip-hop style contribute to perpetual soreness. "Your joints and your knees take a lot, because we do a lot of positions that are frozen, and we tense up a lot in our show because the moments require that," Tripp says. "Your muscles never get the chance to completely relax, because you have to hit and be so low into the ground."

The freezes and moments of tension Tripp refers to are examples of micro-trauma: miniature traumas in the body that build up over time and eventually cause more-noticeable problems. Recurring micro-trauma can occur in various body parts depending on the genre. But according to Richardson, the majority of all dance injuries occur in the foot and ankle.

In shows like "The Lion King," certain movement vocabularies tend to consistently agitate specific areas of the body. "Giraffes have wrist problems from walking on stilts," Veasey says. "The girl who plays the cheetah tends to have a lot of back issues."

The elaborate headpieces, signatures of "The Lion King," may contribute to the increase in cervical and upper-thoracic strain Richardson encounters at work. "As far as my headpieces go, I don't think I have anything heavier than a couple of pounds, but when you're jumping and leaping that takes its toll," Veasey says.

Richardson suggests that the best way to maintain health under full-body repetitive stress is to counteract that movement through cross-training. "Anything that makes you move your body differently than what you do 90 percent of the time is going to be beneficial," Richardson says.

But even with intense amounts of cross-training, dancers are still widely susceptible to injury due to a sometimes exhausting schedule. Studies at Harkness show that 75 to 90 percent of injuries result from fatigue. "On a tissue level you have muscular fatigue, but it could also be systemic where you're not getting enough sleep," Richardson says. Studies, such as the one led by Dr. Marijeanne Liederbach at the Harkness Center, demonstrate that the majority of injuries tend to occur at the end of the day or at the end of a performance due to muscular fatigue.

"I don't think people realize, in general, how hard that schedule is," Veasey says. "By the sixth show of the week, you need to find some higher power to get you through those last two shows."

A dancer's greatest ally is a choreographer who caters to the hectic nature of this schedule. Tripp had the privilege to work with dancer-choreographer Andy Blankenbeuhler as part of the original cast of "Heights." [Blankenbeuhler] "knows what it means to do eight shows a week and the type of movement and how rigorous it can be on your body," Tripp says. "He was thinking of not only the longevity of the show but of the dancer as well."

Tripp also takes responsibility for his career's longevity and personal well-being. While some may claim that the dancer's schedule creates a time crunch in which thorough stretching or strengthening is not an option, Tripp disagrees. "For anyone to say that there's no time…it's a bit lethargic on their end," says Tripp. "I make it a discipline and a commitment to dedicate myself to getting rest as well as warming up." Tucker agrees, saying, "As a performer you are in charge of taking care of your body." Still, Richardson argues that the problem may be a lack of not time or desire but of knowledge about proper preparation, training, and cross-training.

Hardships of professional dancing inherently accompany the career. Maintaining a healthy body given the myriad risk factors is a full-time commitment. As Tripp says, "It's a job within a job."