Danny Burstein on the Magic, Comedy + Humanity of ‘A Midsummer Night’s Dream’ 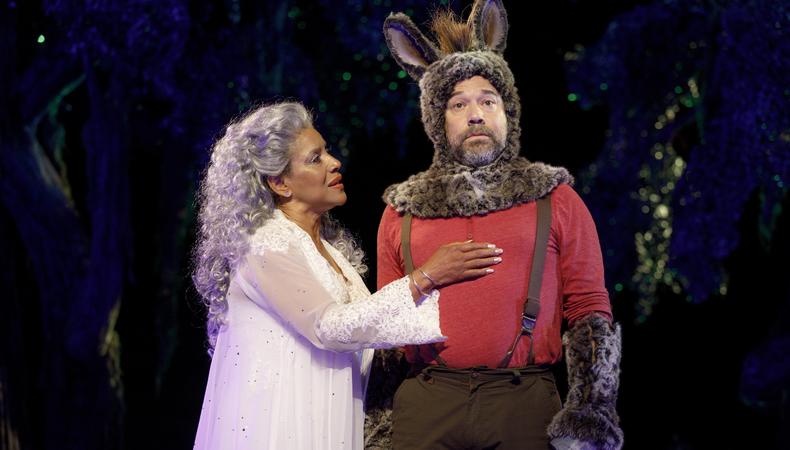 As a foolish mortal, you’d be hard-pressed to find a more magical for a performance of Shakespeare’s “A Midsummer Night’s Dream” than the Delacorte Theatre in Central Park on a literal midsummer evening. But the magical surroundings are only part of what makes The Public’s Free Shakespeare in the Park version so enchanting. Running through Aug. 13, the Lear deBessonet-directed show takes a well-known and much-loved work and breathes new life into it with clever casting, hilarious performances, and yes, a truly charming backdrop.

One of the mortals gracing the stage is Broadway vet Danny Burstein as Nick Bottom, the weaver-turned-actor-turned-donkey. Though it’s been 30 years since he last performed the Bard, Burstein dons Bottom’s donkey ears as naturally as if he had played the character all his life. And just a week after starting previews, the actor chatted with Backstage about his character development process, the one Shakespeare character he’d kill to play, and why “Midsummer” truly has something for everyone.

Tell us about your role in Shakespeare in the Park’s current production of “A Midsummer Night’s Dream.”
Nick Bottom is a laborer, a weaver who sees himself as something better than just a laborer. He sees himself as a great artist, a master thespian. He’s a legend in his own mind. And that’s the way he approaches his theatrical endeavors—that he’s just sort of been misplaced in the world. Yes, he’s a weaver. But he is a master thespian and that’s where his true love lies.

What is it about “Midsummer” that makes it one of Shakespeare’s best-known and most-beloved comedies?
I think it’s the story more than anything. It’s about people, it’s about the journey, and what people learn along the way. That’s something I knew from the very beginning I had to work on. [Nick Bottom] comes off in his first couple of scenes as completely arrogant and sure of himself and then he has this crazy episode happen in the woods, and what has Nick Bottom learned by the end of it? That’s something I’ve tried to interpolate into the role and into the play-within-the-play. He’s all of a sudden kinder and in a deeper way, more sure of himself.

You see that in the way he treats his fellow actors who he sort of dismisses early on in the play and yet he has this wonderful feeling of camaraderie and he’s sure of himself in an almost sexual way as well as an artistic way. His acting actually gets deeper and better....it’s sweet and real. And he was, I think, incapable of that before the episode in the woods. And then, of course, he throws it all away. But the fact that that moment is in there and the fact that I wanted to show he had been changed in some way by the episode allowed me to play that moment as honest as possible.

How did you make this Nick Bottom your own?
The same way I approach every other role: I just try and find out as much material as I can about the character. In a way, I put him in a box. All the circumstances of his life and what’s going on in this play that surround him. Then I try to push the envelope and go in different directions and burst out of the box.

You have to start with all the given circumstances of the show, the rules of the game for every play that you do. But you have to start from a very honest place. The first thing you want to do is make it as real as possible. And then given the circumstances of what that particular game are, what that director wants to do, you know what the rules are and how far you can push them. And then you just keep playing. Every day at rehearsal is a chance to explore and try as many new things as possible. The text affords you many, many opportunities to go in different directions. And you have to explore as many of them as you can think of, as your imagination will let you. That’s what my rehearsal process is like.

You learn the rules of the game and then you try to push them in every direction. It’s crazy but the first day of rehearsal I have no idea what the hell I’m going to do, I’m terrified. I’ve tried to make some choices beforehand but I’m not sure. And so I have to be willing and open to trying new things.

Your last role was “Fiddler on The Roof.” Why the desire to do a play next? Did you have to shift gears to get into a Shakespeare mindset?
It’s all real. That’s how I approach it all. You have to believe the guy, so no matter whether you’re going a TV thing or a film thing or a musical, you always have to start from the same place: that it is a real person going through a real situation. And so the transition is not that hard. I think of all of these things as a sort of game. And the rules of the game in a musical are that when you get so emotionally involved in something, that you’re so moved you can’t speak anymore, you have to sing. That’s the rule of the game in a musical. And in Shakespeare, you’re so moved that when you’re alone you start speaking out loud and you have a soliloquy. And the audience is your confidant. You play within the confines of that and it’s ok to do that.

What advice do you have for actors looking to perform Shakespeare professionally?
Don’t be intimidated. So many people say, ‘I don’t really like Shakespeare’ because they don’t understand it, they haven’t delved into it. I would tell them not to be intimidated by the language but to embrace it and understand it and make it as real as possible. And not to feel the need to orate and pontificate and overstate anything. Try and make it as real as possible while honoring all that is in the text. The beauty of the sounds the beauty of the language. But within those confines, within the rules of that game, and make it as honest as possible. So a lot of people tend to SPEAK LOUD and that kind of thing, and make it sound like, ‘I’m speaking Shakespeare!’ As opposed to doing that, I would encourage them to just try and use the dialogue the way you would use any other dialogue: to do something, to get what you want.

Which Shakespeare character would you kill to play?
Wow. I mean, I guess it would be Hamlet like any other actor would say. Because it’s probably the greatest play ever written and such a beautiful role. And some of his dialogue—all of his dialogue, really—it’s just so beautiful.

What one Shakespeare play should every actor see performed, or perform in?
I would absolutely tell them to see or read “Midsummer Night’s Dream.” It has everything in it. It has the poetry, it has the prose, it has some serious things, it has comedic things, it is magical. It is fun, it is transformative, and it’s just a beautiful play that has everything. And it’s not ‘Richard II,’ it’s not a historical play where it’s hard to decipher exactly what’s going on in all the moments. It’s easily accessible and a wonderful door to Shakespeare if you’re intimidated by it. You can’t go wrong with ‘Midsummer.’

Allie White
Allie is Backstage’s director of editorial operations, whose professional background includes women’s interest, news, health, beauty, and, of course, entertainment. Despite a crippling fear of singing in public, she still believes she’ll be a Broadway star one day.
END_OF_DOCUMENT_TOKEN_TO_BE_REPLACED