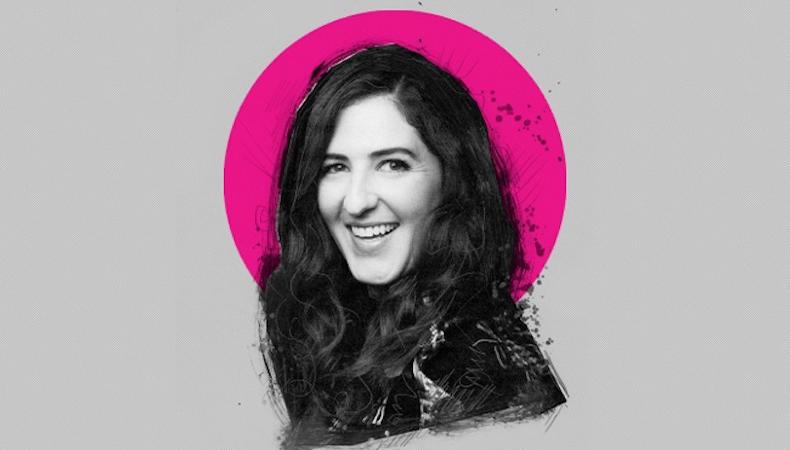 Before her audition for the NBC comedy “The Good Place,” D’Arcy Carden recited a mantra her father had ingrained in her as a child: “You are the best. You are the king of the world. There is nobody better than you.”

“I can’t believe how often I say that to myself,” Carden says. “My dad created four overly confident children.” But she got the role. As Janet, the AI assistant with all the afterlife’s answers, Carden works another masterful comedic performance, a skill she honed through performing at the Upright Citizens Brigade Theatre and as fitness trainer Gemma on “Broad City.”

Before “The Good Place” returns on Sept. 28, Carden shares details about her first headshot and her experiences reading Backstage.

What has working on ‘The Good Place’ added to your acting skills?
The challenge with Janet that I didn’t see coming was how to play a character that basically doesn’t react. As an actor, all you’re taught is how to react, whether it’s your words or your facial expressions [or] body language. With Janet, she doesn’t react to things. She’s pleasant and unflappable. She’s not a robot, but she’s a different character than I’d ever played. You’d think it’d be simple—don’t act as much! But because of years of acting, it felt like a weird challenge.

What advice would you give your younger self?
To have patience with this career where some people find success when they’re 20 [and] some people find success when they’re 40. Just know that there are always more jobs. Never stop performing and taking classes and learning from your scene partners. A lot of it is having patience, and the other part of it is to be super nice and a hard worker and know your lines and don’t burn your bridges.

Have you ever used Backstage in the past?
When I first moved to New York, right after college, I lived with my best friend, who was also an actor and a dancer. We lived in a two-bedroom apartment with five people and we were incredibly poor because we were kind of temping and kind of babysitting and trying to keep days free to audition. We would split a Backstage; she would buy one one week and I would buy one the next because that’s how poor we were. We would circle all the auditions we wanted to go to and we’d try to go to the same ones for support because it was scary. When I moved to New York, that was the way you got to an audition. Backstage was the word in audition. It’s just grown and gotten better.

What was your most memorable survival job?
I did the waitress thing, I did the temping thing. The day job I enjoyed the most was nannying. I was a tour guide for this big New York City tour bus called the Ride, which is this huge bus that goes through New York and you kind of play a character as a tour guide. A bunch of actor friends and I got those jobs early on. It felt like a step in the right direction, but it was also “What am I doing?” You didn’t even use your name.

What was your first headshot like?
My first headshot was in college, and it was [shot by] a friend who was a photography student; she took all the actors’ headshots. The problem with them was I’d just gotten bad highlights. [Laughs] This was back when headshots were in black and white, and the highlights just showed up really bright and white, and that’s all I could see. I used them all through college, and when I moved to New York, I immediately realized they weren’t up to par. So I got some different ones that, looking back, weren’t so good either! Headshots in the moment are good and the second you outgrow them, they’re embarrassing.

How does the team on “The Good Place” differ from other casts and crews you’ve worked with?
The extremely special thing about “The Good Place” is you have living legend Ted Danson and Kristen Bell, who has been working professionally since she was a teenager. Then you have the four of us, what I call the babies; Will [Jackson Harper], Manny [Jacinto], Jameela [Jamil] and I, this is our first big show. You think there’d be this weird power dynamic between the people who have been working for a long time and the newer people, but it’s this little cohesive perfect family. Ted Danson, who has been basically famous as long as we’ve been alive, he’s as excited as we are to be on set.

And just being on that colorful set must be joyful.
It is a beautiful set. We get to work outside a lot in the beautiful L.A. weather. It’s an extremely pleasant work environment. You have Kristen and Ted, who are wonderful, and Mike Schur, who created it, is known for being one of the best people in the business. He’s surrounded by people who love working for him, who have worked for him for years. People just follow him to the next thing because why would you not want to work with him? So you’ve got this great writing staff. It feels like a rock-solid group of people. For being my first regular, I’m so spoiled.

Do you think people underestimate those little things?
I think so. The weird thing about this job is that some people are in it because they love to act and some people are in it because they want to be famous. It’s clear pretty quickly which one of those people you are. So much of it is being a collaborative actor on set or in a theater. My background is in improv, and we subscribe to making each other look like geniuses. It’s not about making yourself look like the star, it’s about the promise that I will make you look like a genius if you make me look like a genius. That bleeds into regular acting and life in general. That has stuck with me. It’s not about me being the star as much as us building each other up.

How does your improv training translate on a set?
Doing improv shows, if that feels like something you want to do, go for it. It’s such a good tool to have as an actor. It’s helped me in a million jobs and it’s gotten me a million jobs. You don’t need improv to be an actor, but it helps me to keep scenes fresh. The thing about acting for TV is you do a lot of takes, and you want to try to give the director and the editor a lot of options, and having that improv background makes it a lot easier to do that. I still perform at Upright Citizens Brigade sometimes more than once a week. It’s like exercising. If I was a professional basketball player—which I could be by the way—I would still go to the gym. For me, improv feels like exercising.

Did you play basketball?
Yeah, baby, I still do! I play on a team in L.A. called the Lucille Ballers. A bunch of writers and actors are in the league, it’s all women. I joined it right when I moved to L.A. as a way to not think about acting.