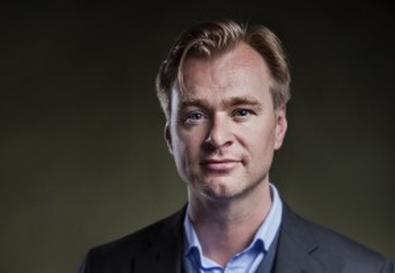 Photo Source: Shiloh Strong
Christopher Nolan has taken enormous risks in his filmmaking, whether telling a mystery backward in his breakthrough film "Memento," daring to incorporate real magic in a tale of dueling magicians with "The Prestige," making a heady art-house flick disguised as a big-budget blockbuster with "Inception," or rescuing the "Batman" franchise after the neon-and-nipples debacle of Joel Schumacher's 1997 "Batman and Robin." Along the way, he has worked under a veil of secrecy in an age where anyone with Internet access seems to know every twist before a movie opens. And no matter how high expectations are for each of his projects, his chances have paid off handsomely -- he has never made a less-than-excellent film. So really, there's only one thing I want to ask Nolan on meeting him: What's it like to be so awesome?

"Great opening question!" Nolan says with a laugh. When pressed for an actual answer, he defers to the work. "Well, I don't really know how to answer that, except to say that people seem to be liking this movie, which is great. And also a huge relief." The movie in question is, of course, "The Dark Knight Rises," the final installment in Nolan's Batman trilogy, coming to theaters July 20 with all the expectations and fanfare of a hundred Super Bowls. On this day, less than two weeks from the opening, Nolan is presenting a calm façade. Known as one of the best-dressed directors in Hollywood, he always wears a suit on set and today has arrived looking like he stepped out of a fashion shoot. He has reason to be confident -- early reports have audiences loving the film -- yet says he feels "excited but nervous."

Nolan is averse to any discussion that might reveal key plot points in his films and has gone to great lengths to preserve the surprises. Actors aren't initially given a copy of a script but asked to come to the office to read it. For a key moment in "The Dark Knight Rises," Nolan whispered the line in the actor's ear just minutes before shooting. "It's very challenging," Nolan says of the subterfuge. "It's become a real burden, actually, trying to keep things secret with what technology is. You have to resort to some pretty extreme methods." Nolan adds that he completely understands why audiences are interested in getting answers. "It's like people want to open the present before Christmas, but they kind of know they shouldn't. And it doesn't help that there are online journalists who feel you can say whatever you want as long as you say 'spoiler alert.' Which doesn't work, because of course people are going to read it. They might not want to read it, but if it's there they can't help but look, or someone will tell them about it."

Nolan understands the value of marketing, and he's quick to point out that these steps are intended to preserve the freshness of a film for crew and audiences alike. "It's not about secrecy; it's about privacy," he says. "It's about creating the film in a private working environment so that we can make mistakes and screw around, and find the story. And when it's finished, then it's open to everybody to rip to pieces and do whatever they want with it." Out of curiosity, what is the punishment if someone is caught leaking something from a Nolan film? "I couldn't say," Nolan replies. "Beyond anything they could imagine." He laughs to show he's joking. Possibly.

Great Performances
Blockbusters aren't generally known for outstanding acting, but Nolan's are an exception. It's not surprising Heath Ledger won an Oscar for playing the Joker, a character previously portrayed as cartoony. Joseph Gordon-Levitt, who appears in "The Dark Knight Rises" and walked on walls in Nolan's "Inception," notes that the director brings out the best in his performers. "Everyone is at the top of their game," he says. "And that's Chris Nolan for you; even in the midst of this enormous action blockbuster, he runs a set that prioritizes the actors."

For a man whose films are filled with double-crosses and in which nothing is as it seems, Nolan says he's transparent when working with actors. Much of that springs from his deep respect for the craft. "I admire what they do so greatly. There's no ego involved because I can't do what they do, and they know I can't," he says. "So it's partly about respect, but if I'm completely honest, it's also because really good actors are students of human nature and can tell when you're lying. They can smell rationalizations and games a mile away." To that end, Nolan says he has never given an actor a line reading and involves them early on in talking about characters. "Sometimes a disagreement can become a positive thing, a creative discussion," Nolan says. "That's a very different thing than being in a position where you're trying to manipulate someone to do what you want."

When Nolan set out to direct his first feature, "Following," he asked advice from his uncle, actor John Nolan, who was teaching acting at the time. Says Nolan, "He told me, 'You need to look at Stanislavsky. That's all you really need, is to get a handle on the concept of the psychology of acting as opposed to indicating -- inhabiting the character.' " To that end, Nolan recommends Stanislavsky's "An Actor Prepares," which he says helped him better communicate with actors while also giving them room to figure out their own methodology. "Beyond that, I like to keep it a bit of a mystery what actors do," he says. "That keeps it interesting."

Nolan has a few methods of finding actors. He works closely with casting director John Papsidera, who has cast six of his eight features. Papsidera praises Nolan's "great instinctual nature" in casting, saying, "I think Chris also sees that intuition in me. We relate to one another on that level and don't overthink the process." Nolan says he can always rely on Papsidera. "In a film like this, we have something like 97 speaking parts," Nolan says. "So you get to a point where I literally have to call up John and say, 'I need a guy to do this kind of thing in a couple days; send me somebody.' And he sends someone who does a great job. That comes from years of working with him and his great relationship with actors."

Nolan also credits recommendations from people he works with "who very much have their ear to the ground and have a lot of good suggestions about who's up and coming." He cites Gordon-Levitt as an example of someone he was told to look into for "Inception"; Nolan wasn't very familiar with the actor's work when he brought him in for a meeting. Another way Nolan locates actors is through watching movies. When Tom Hardy landed a role in "Inception" before taking on the villainous Bane in "The Dark Knight Rises," the actor's breakthrough performance in "Bronson" had yet to be released. "I was on a plane and I caught Guy Ritchie's film 'RocknRolla.' He has a small part in it, but he just leapt off the screen," Nolan says. "It's really fun discovering new people -- I don't mean to say I discovered them, but personally experiencing somebody new you don't have any preconceptions about."

Nolan also has a fondness for actors from the 1980s who aren't seen as often as they once were -- cases in point include Rutger Hauer in "Batman Begins," Eric Roberts in "The Dark Knight," and Tom Berenger in "Inception." Says Nolan, "I always wanted to work with Rutger Hauer because I thought he was so cool. And Eric Roberts was amazing in 'The Pope of Greenwich Village.' But the thing you find when you're casting older roles is that there are amazing actors out there who don't get their due. And you can get these amazing guys who are excited to come in and do an incredible job."

Nolan has built up a sort of repertory company of players, such as Michael Caine, Christian Bale, and Cillian Murphy, who appear repeatedly in his films. What do actors have to do to be asked back? Nolan says simply, "Behave themselves."

Subjective Objective
Nolan is aware that as acclaimed as his films are, there will be detractors. He has heard criticism that his female characters are underused, and the word "cold" is often tossed around to describe his movies. "To be perfectly frank, there are certain criticisms of your work that you hear both ways," he says. "I'll often read my films are unemotional, and then I'll read someone criticizing them for being overly emotional or emotionally manipulative." Perhaps because his films are so intelligent, people concentrate on following the mind-bending plots and forget that there is a great deal of passion as well. It's easy to talk about the science in "Inception," but at the end of the day, it's a story about a man who wants his father's acceptance and a thief who longs to return to his children. (Anyone who doesn't tear up when Robert Fischer finds that childhood pinwheel in his dying father's safe is made of stone.) "Memento" is a man seeking revenge for his wife's death. "Batman," at its heart, is about an orphan out to avenge and save a world he doesn't quite fit into.

"People who write about movies, bloggers and such, don't take their own subjectivity into account perhaps as much as you'd like them to," says Nolan. "I don't mean to absolve myself of responsibility, but I don't think any of those criticisms are completely true in an objective sense. There are reasons people feel these things -- some of them due to the films; some due to their interpretations. Everybody watches films differently; that's what keeps it interesting." As for his female characters, "The Dark Knight Rises" features two complex women who more than hold their own with the boys. Nolan points to other actors -- Rebecca Hall in "The Prestige," Carrie-Anne Moss in "Memento," and Hilary Swank in "Insomnia" -- he has worked with. "I've been really privileged to work with some incredible actresses, some of the greats," he says. "I certainly feel like I've availed myself of all kinds of amazing female roles."

Nolan has also learned something interesting about his films in recent years; if you try too hard to figure them out, you'll miss the experience. "'Memento' really taught me that when people watched the film in a passive way and let it drift over them, they completely understood the film," he says. "People who bristled at the structure and felt they were being tested would get frustrated and angry and not feel the emotion in the film. These movies really do tread a fine line because you're asking the audience to engage pretty actively, but you're also asking them to just go with it and let it wash over them at the same time. It's tricky. For that reason, you don't always get the emotional response you might want."

Nolan's films have inspired repeat viewings and endless theorizing, but a viewer never feels Nolan isn't in control. Does he ever confuse himself when designing his intricate plots? "Not when I'm making the film. It's always unbelievably clear to me, and I can't imagine that anyone's going to have any trouble," Nolan says. "But I will confess that I tried to watch 'Memento' a while back and in the first 20 minutes I said, 'This is absolutely baffling. I have no idea how anyone could follow this movie.' Then I watched it again properly and it was that whole thing of relaxing into it. If you try to puzzle it out, it will only confuse you."

It's probably wise to listen to Nolan and relax into the experience of his films; audiences are in good hands.