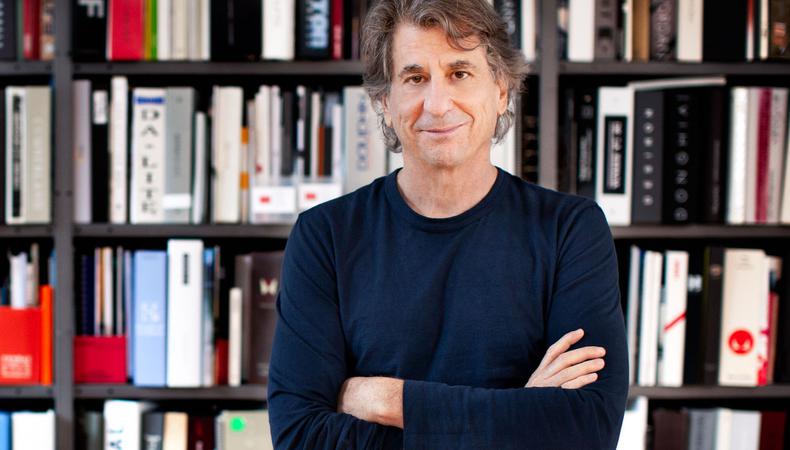 David Rockwell is an award-winning architect and one of New York City’s foremost set designers. Over 30 years ago he founded Rockwell Group, a cross-disciplinary architecture and design firm. The author of “What If...?: The Architecture and Design of David Rockwell,” he was recently nominated for Tony Awards in both the play and musical categories for “You Can’t Take It With You” and “On the Twentieth Century,” bringing his total nominations to five.

How did you fit an entire train onstage in “On the Twentieth Century”?
Part of what is so interesting about the piece is the train is a character in the show. We began by deeply researching into the period—an incredible period in design. There was a combination of extreme opulence and speed, an unusual combination. In conversations with Scott [Ellis], the director, we wanted that sense of movement. If you look at the [show’s] poster art, they all have that forced perspective, that streamlined, aerodynamic vocabulary.... We wanted to see that perspective from the outside, and as the train rotated around we’d be taken into the interior. That became the main logistical challenge of the show. It’s 33 feet long and 13,000 pounds.

How much did you have to think about those logistics?
I think the magic of theater is the chance to collaborate with a team of amazing designers. The set has to dance and move; that train not only rotates but also goes up and down stage, left and right. It really is part of the choreography. The single most important job for a set designer is to support the telling of the story.

How did you do that in “You Can’t Take It With You”?
There was something wonderful about this family in contrast with the rest of the world; that’s ultimately what the daughter has to deal with. That led us to setting the play with an exterior of their home flanked on either side with more normal buildings. In every part of that—little gnomes on the porch, mementos and tchotchkes—every one of those hundreds of pieces related to part of the story.... [Ellis] had the cast provide one or two pieces [for the set’s walls]. It became a way to connect emotionally with the show.

What initially set you on your path as a designer?
The first Broadway show I saw was “Fiddler on the Roof” at the Imperial Theatre. From that moment on, what was mesmerizing about theater design has been those moments when the music, set, and acting all move together creating a seamless story. It only exists for the two and a half hours you’re in the theater, but it creates very deep memories.

What’s an important quality in an early-career designer?
Being really open to new ideas and research—and being curious. Curiosity is the designer’s best friend. New York couldn’t be a better place to absorb culture from all areas; some of the best ideas are from installation art. The city is such a kinetic place to experience movement.

Jack Smart
Jack Smart is the awards editor at Backstage, where he covers all things Emmy, SAG, Oscar, and Tony Awards. He also produces and hosts Backstage’s awards podcast “In the Envelope” and has interviewed some of the biggest stars of stage and screen.
END_OF_DOCUMENT_TOKEN_TO_BE_REPLACED