The Defining Element of Sundance Hit ‘The End of the Tour’ 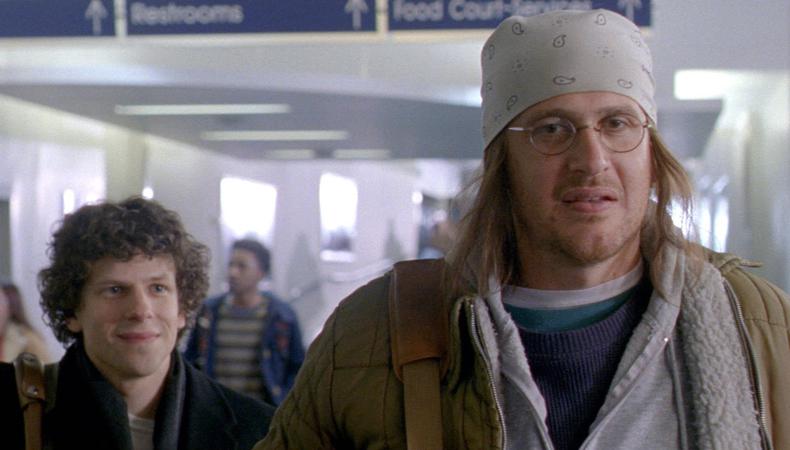 The first thing you need to know about James Ponsoldt’s “The End of the Tour” is that it’s not a biopic. In fact, the director has little tolerance for that particular genre.

“I think all films are subjective,” Ponsoldt says. “Some just pretend or delude themselves into thinking they’ve got some God’s-eye point of view.” Traditional biopics that try to fit their subject’s entire life into two neat hours “draw easy conclusions. But they don’t really make the best movies.”

Subjectivity, then, became the foundation for “The End of the Tour,” a film based on “Although of Course You End Up Becoming Yourself,” David Lipsky’s account of five days spent interviewing literary icon David Foster Wallace. Under Ponsoldt’s direction, the Sundance select seeks to depict Lipsky’s impressions of Wallace, rather than provide audiences with a verdict on who the man was.

“It’s a memory story,” he explains. “When you’re meeting David Foster Wallace, you’re meeting him through the eyes of Lipsky. It informed everything, from the way the story is structured to where the camera was positioned; every element embraced the subjectivity.”

Screenwriter Donald Margulies, who taught Ponsoldt in a playwriting course at Yale University, sent the director the script, asking about his familiarity with Wallace. “Little did he know I was a massive fan of Wallace’s writing,” says Ponsoldt, who read the author’s seminal novel, “Infinite Jest,” while at Yale and was hooked. “I was excited and sort of terrified to receive [the script]. Excited because it was Donald and he’s a fantastic writer, and terrified because Wallace means so much to me and I know exactly how much he means to fans.”

With that in mind, casting an actor who could do justice to the late author’s legacy became top priority. Jason Segel, in a career-redefining performance, not only embodies the man’s distinct dishevelment—his hippie hair grimy and covered by a succession of bandanas—he captures the intense ambivalence toward fame that Wallace felt on his national tour promoting “Infinite Jest.” Jesse Eisenberg, equally compelling as Lipsky, brings both awe and wariness to their days-long interview, which veers from breezy to confrontational and back again.

“Like a lot of directors and filmgoers, I have a sort of mental Rolodex of people that I would love to work with,” Ponsoldt says. “We were very thorough and talked about a lot of people, met a lot of people, and felt we really arrived at the exact, correct two guys to play those roles.”

He and the film’s producers worked with Avy Kaufman, whose experience casting historical figures on projects such as “Lincoln” makes her, in Ponsoldt’s opinion, “the best casting director in the business.” But when it comes to giving the final say on chemistry and casting, Ponsoldt trusts his instincts—the same instincts that led him to give Shailene Woodley and Miles Teller their breakout roles in “The Spectacular Now.”

Segel and Eisenberg perfectly fit the roles, he says, and not only because they’re both writers themselves; the actors’ rapport, which grew throughout filming, nicely paralleled that of their characters. “There was something exciting about the fact that they’d never met before. There was a process of discovery and testing that was really important.”

Thanks to these innately vulnerable performances, audiences don’t need to have consumed all 1,079 pages and 388 endnotes of “Infinite Jest” to relate to the man interviewing its author. “I didn’t want this to be inside baseball,” says Ponsoldt of the film. “I think everyone’s had that experience of having someone you admire from afar, someone you abstract or idealize or romanticize or are jealous of or measure yourself against.... And then getting to spend 10 minutes with them, or an afternoon, and hoping for the experience to go one way and having it just go a different way because people are people and they’re complicated. That messy humanity complicates the transaction.”

Jack Smart
Jack Smart is the awards editor at Backstage, where he covers all things Emmy, SAG, Oscar, and Tony Awards. He also produces and hosts Backstage’s awards podcast “In the Envelope” and has interviewed some of the biggest stars of stage and screen.
END_OF_DOCUMENT_TOKEN_TO_BE_REPLACED