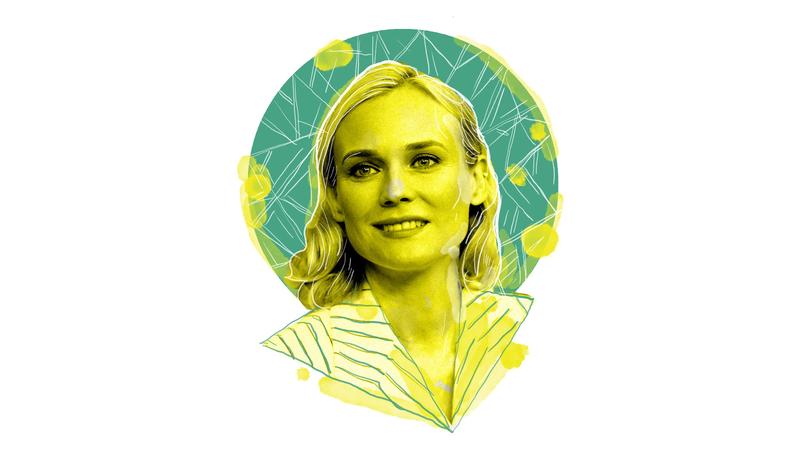 Diane Kruger is truly an international actor. German-born and now Paris- and New York–based, she is best known for starring in 2004’s “Troy,” 2009’s “Inglourious Basterds,” and 2017’s German-language, Golden Globe–winning “In the Fade.” Now, in “The Operative,” Kruger stars as Rachel, an undercover agent for Israel’s national intelligence agency, Mossad, whose assignment in Iran quickly merges with real life.

How did you first get your SAG card?
It was “National Treasure” with Nicolas Cage. I remember that, because I hadn’t been to Hollywood and I was cast for “Troy,” which I did [earlier,] out of Europe. Then I got hired to do “National Treasure,” and with it came my first SAG card.

What’s the wildest thing you ever did to get a role?
I don’t know if it was wild, but I’ve tried to look the part for the first meeting. I remember for “In the Fade,” which was very outside-the-box for me to get cast in, I could feel on the phone that the director, Fatih Akin, was unsure if I could pull it off. He flew to Paris to meet me and talk about the script. I was nervous because I thought, Oh, he’s going to come to my apartment in Paris and think I live this fabulous French life. This character is very rough and tough. So I didn’t wash my hair for a week; I found these old jeans in my closet from when I was 16 with holes all over them. I opened the door with a beer in my hand—I don’t know why, [but] I thought if I were a German character, I would drink beer. And it worked, because he said the minute I opened the door, he thought I was right for the part.

What did this latest role in “The Operative” add to your acting skills?
I did a two-week Mossad training course in Tel Aviv. That was fun. It obviously only scratched the surface of what it means to be a spy, but they gave me a false identity and dropped me off at the international airport in Tel Aviv and I had to try and enter the country on a false passport. In the back of my mind, I knew if I got arrested, they’d get me out of prison, but I felt my heart beating in line, pretending you’re not who you are. They made me do little things like manipulate people in the street. Little missions where you have to try and enter someone’s apartment and peer on the balcony, and they waited outside. They showed me safehouses, enough stuff so that I got a sense of what it would be like.

Were you successful in entering the country with a false passport?
I was, but, again, Mossad is not to joke with. I never knew there were as many back entrances and ways around ways as when I was with Mossad agents. I don’t know to what point I was set up, but it was an eye-opener.

How do you typically prepare for an audition?
I would say you have to be off the paper, no matter what. If you struggle to find your words, you’re really tied down. And you want to be as free as possible and take direction and be able to play around with it. I hate auditioning. It’s a very weird process, and casting directors often ask you to perform the most emotional scene of a script, and it’s very difficult to do that out of context. Sometimes you don’t get to read the entire script beforehand. You’re very vulnerable, very exposed in a way that is not always helpful to getting a part. I don’t audition as much anymore, but I’ve learned over the years that if you express that—your nervousness, your uncertainty—the more questions you ask, the more helpful people will be. They try to help you rather than watch you fail. In general, even other actors, if you ask for advice or you ask for more time and you express your emotional state, I have found that most colleagues and people in the industry want to help you.

What is your worst audition horror story?
[There was] a movie I really wanted to make, and the audition was a monologue, a really long one. At the audition was the casting director, and he wasn’t very warm. So I started the monologue, and his phone rang. He picked it up and said, “I’m in the middle of an audition,” and hung up. I started again, and his phone rang again. He took it and was like, “Sorry, I have to deal with this,” and left the room and took the call and came back in and said, “OK, go again.” I started again, and the phone rang again. So I got up and left. It was so disrespectful. Why would I want to work for someone like that?

What performance should every actor see and why?
I don’t know if there’s one performance. My favorite actress is Romy Schneider, who was a German actress. Her performances inspired me to become an actor. She’s great in all of her films. Even if you watch someone give a bad performance in a movie, everything is informative. Everything helps you to measure yourself, be inspired by others. Watching somebody else give a performance is exhilarating. I feel great inspiration from other women—and guys, too. Sometimes I watch movies that I didn’t get or I didn’t want to do, and you see someone else in that role and see how well they do. I really, truly believe there’s a part for everyone. There’s not really competition. If it’s right for you, you’re going to get it.

What advice would you give your younger self?
To relax a little bit more. To express how you feel and when you need help. One of my first movies was a film with Ed Harris; it was a period piece. There was a very complicated shot—it went on all day, this one scene—and I had to be very emotional. I was very green, and after a few times, I couldn’t get there again. I was trying to force it, and I remember Ed coming up to me because he could see me struggling, and he said, “Don’t think about it. If the tears come, that’s great, but if they don’t, you can be just as emotional or sad without tears.” The fact that he took the time and was there to help me meant the world. It changed everything. The kindness of your colleagues, feeling like someone has your back, is invaluable.

Other than all the languages that you speak, do you have any other special skills on your résumé?
I’m a bad singer, I know that, so I’ve never been cast in a musical. I think you just have to be malleable, to pick things up quickly. I think I do pretty well with accents, maybe because I’m not American.