Digging Deeper Into Drama ‘Body of an American’ 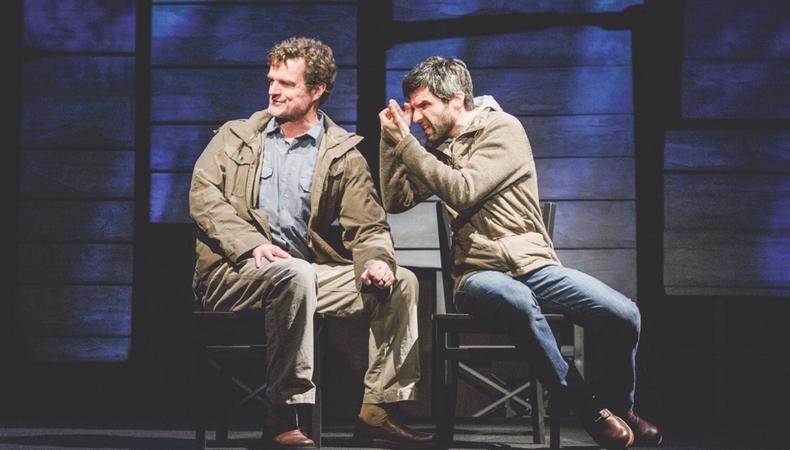 Couples shouldn’t be as funny, talented, and downright fun as actor-writer Jessica St. Clair and playwright-poet Dan O’Brien. St. Clair (USA’s “Playing House”) recently sat down with her husband to talk about the Primary Stages production of his drama “The Body of an American,” running through March 20 at NYC’s Cherry Lane Theatre, starring Michael Cumpsty and Michael Crane and directed by Jo Bonney. The play is based on O’Brien’s friendship with war photographer Paul Watson, prompted by an NPR interview in which Watson revealed that as he snapped the photo that would win him a Pulitzer, a voice whispered, “If you do this, I will own you forever.” St. Clair and O’Brien discussed what it means to write yourself into your work, the inability to separate drama from comedy, and the “spooky serendipity” of collaboration.

Jessica St. Clair: Let’s go back to the beginning. What I want to know is—because we’ve been together for 19 years and some of it is a blur to me—take me to where you were at emotionally when you reached out to a perfect stranger.

Dan O’Brien: We were leaving Princeton, and we were packing up to move to L.A. It was a big turning point, a rupture. I was excited to move, but I felt like everything was changing. I was just haunted by [Paul’s] story of being haunted by this voice he heard. I’d never written to someone I didn’t know. I didn’t know he’d write back. Part of the story of the play is that I took years of emailing him before I wrote a draft of the play.

Were you aware that it would ultimately be a play about you writing a play? That you would be a character in it?
No. No, from the beginning I was interested in this idea of a normo, a normal person like me, or us, who hasn’t been directly affected by these last two wars. Only 1 percent of the country serves [in the military], and they come from a very specific socioeconomic class. So I was interested in having someone in the play more like the audience.

Essentially, you guys fell in love over email. You shared really personal things with each other before you ever met in person. Did that help him trust you more?
Probably. He says a lot that he doesn’t know why he answered my email. He feels like there’s some kind of spooky reason why he wrote back to me.

Do you feel like that? I called it “spooky serendipity.” It does feel spooky at times. Any time you have a friendship or productive collaboration, there’s something mysterious about it. Something lucky and probably random, but something you don’t necessarily want to figure out.

For me, I can write about real things but hide it as fiction. But you’re writing the character Dan, and you then have to sit and watch people watching Dan deliver a monologue about your brother’s attempted suicide. What is it like to watch? Sometimes it’s emotional to watch. It is draining sometimes, but it’s often cathartic. But when I discuss it with the actors, we talk about the character. And we should. It’s a craft, and I don’t want to turn it into a therapy session.

Anyone who follows you on Twitter knows how funny you are. But when you see “The Body of an American,” which has Paul’s photo of a man being dragged through the street, you’re surprised at how funny it is. I mean, it’s definitely a drama. But I don’t think you can separate comedy from drama.

Do you think the audience is surprised when they laugh?
I think they’re relieved. I think it’s hard to cast the right actors and the right director. You need actors who get that sense of humor and a director who can control that balance, and we definitely have that with this production. I just want to be true to my own sensibility and my own tone. I want to write about important things and darker things, but having a sense of humor about it is how I see life.

What do you most want to hear people say after they see the play?
I want people to feel moved, you know? And if I can see or hear that they’re moved, that’s the important thing. If the play has a message, it’s to not turn away from trauma. And not only to not turn away but to embrace it, because that can connect you to other people.

Have people reached out to you? Are you someone’s Paul Watson?
Maybe!