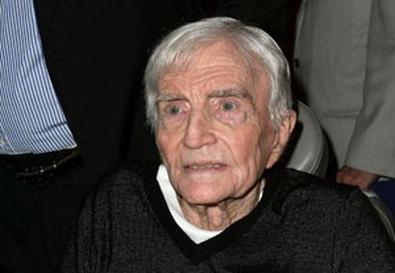 He knew laughter and sadness, making alcoholism seem hilarious in "10" and desperate in "Days of Wine and Roses." But his strength was comedy, farce and slapstick that he captured in a visual style trained on silent comedies. It was, after all, in his blood.

Edwards' stepfather, Jack McEdwards (the family name), was an assistant director, and his stepfather's father, J. Gordon Edwards, was a pioneering director of silent films. Though born in Tulsa, Okla., Edwards was raised on movie sets. He was an extra and supporting actor before he was a filmmaker.

A child of Hollywood who made his home there, he would forever have a conflicted relationship with the industry he assailed, but to which he kept returning. He dropped in and out of favor, feuded with producers and famously satirized Hollywood in 1981's scathing "S.O.B."

"I was certainly getting back at some of the producers of my life," Edwards, who died Wednesday, once remarked, "although I was a good deal less scathing than I could have been. The only way I got to make it was because of the huge success of `10,' and even then they tried to sabotage it."

But he also made movies that added to Hollywood's bottom line, particularly in the "Pink Panther" films.

In one of his last public appearances at a tribute from the Academy of Motion Picture Arts and Sciences in October, Edwards opened his remarks with fitting sarcasm: "Can I go now?"

When the academy gave him an honorary Oscar for lifetime achievement in 2004, he accepted the award with a slapstick gag right out of his own movies: He careened across the stage in a wheelchair, snagging the statue from Jim Carrey and crashing into the set.

"That felt good," he said, dusting himself off.

Edwards, 88, died from complications of pneumonia Wednesday evening at St. John's Health Center in Santa Monica, Calif., after being hospitalized for about two weeks. He had knee problems, had undergone unsuccessful procedures and was "pretty much confined to a wheelchair for the last year-and-a-half or two," said publicist Gene Schwam, who knew him for 40 years.

At the time of his death, Edwards was working on two Broadway musicals, one based on the "Pink Panther" movies. The other, "Big Rosemary," was to be an original comedy set during Prohibition, Schwam said.

"He was the most unique man I have ever known-and he was my mate," Andrews said in a statement Thursday. "He will be missed beyond words, and will forever be in my heart."

A third-generation filmmaker, Edwards was praised for evoking classic performances from Sellers, Moore, Hepburn, Jack Lemmon, Lee Remick and Andrews, his wife of nearly half a century.

Steve Martin, who played Clouseau in the 2006 and 2009 "Pink Panther" productions, said Thursday that Edwards "was one of the people who made me love comedy."

Edwards directed and often wrote a wide variety of movies including "Days of Wine and Roses," a harrowing story of alcoholism; "The Great Race," a comedy-adventure that starred Lemmon, Tony Curtis and Natalie Wood; and "Victor/Victoria," his gender-bender musical comedy with Andrews.

Although many of Edwards' films were solid hits, he was nominated for Academy Awards only twice, in 1982 for writing the adapted screenplay of "Victor/Victoria" and in 1983 for co-writing "The Man Who Loved Women." Lemmon and Remick won Oscar nominations in 1962 for "Days of Wine and Roses," and Hepburn was nominated for "Breakfast at Tiffany's" in 1961.

Edwards had entered television in 1958, creating "Peter Gunn," which established a new style of hard-edged detective series. The tone was set by Henry Mancini's pulsating theme music. Starring Craig Stevens, the series ran until 1961 and resulted in a 1967 feature movie "Gunn."

"Peter Gunn" marked the beginning of a fruitful collaboration between Edwards and Mancini, who composed melodic scores and songs for most of Edwards' films. Mancini won Oscars for the "Breakfast at Tiffany's" score and the song "Moon River," the title song of "Days of Wine and Roses" and the score of "Victor/Victoria."

Edwards began in films as an actor, playing small roles in such movies as "A Guy Named Joe" and "Ten Gentlemen From West Point." After 18 months in the Coast Guard in World War II, he returned to acting but soon realized he lacked the talent. With John Champion, he wrote a Western, "Panhandle," which he produced and in which he acted for the quickie studio, Monogram. He followed with "Stampede."

In 1947, Edwards turned to radio and created the hard-boiled "Richard Diamond, Private Detective," which was converted to television in 1957.

Tiring of the TV grind, Edwards returned to films and directed his first feature, "Bring Your Smile Along." After a few more B movies which he usually co-wrote, he made the big time in 1958 with "The Perfect Furlough," starring Tony Curtis and Janet Leigh, and "Operation Petticoat" with Cary Grant and Curtis.

"Breakfast at Tiffany's" in 1961 established Edwards as a stylish director who could combine comedy with bittersweet romance. His next two films proved his versatility: the suspenseful "Experiment in Terror" (1962) and "Days of Wine and Roses" (1963), the story of a couple's alcoholism, with Lemmon in his first dramatic role.

"The Great Race," about an auto race in the early 1900s, marked Edwards' first attempt at a big-budget spectacle. He spent Warner Bros.' money lavishly, raising the ire of studio boss Jack Warner. The 1965 release proved a modest success.

Edwards' disdain for the studios reached a peak in the 1970 "Darling Lili," a World War I romance starring his new wife, Andrews, and Rock Hudson. The long, expensive Paris location infuriated the Paramount bosses. The movie flopped, continuing Andrews' decline from her position as Hollywood's No. 1 star.

For a decade, Edwards' only hits were "Pink Panther" sequels. Then came "10," which he also produced and wrote. The sex comedy became a box-office winner, creating a new star in Bo Derek and restoring the director's reputation.

"It was my greatest fortune, my life-changing fortune, that he believed in me," Derek said in a statement. "He selected me for the role which shaped everything that ever happened to me. He was a loyal friend and I will miss him and that mischievous expression that would come over his face when he was about to come up with something hilarious."

Edwards scored again in 1982 with "Victor/Victoria," with Andrews playing a woman who poses as a (male) female impersonator. His later films became more personal, particularly the 1986 "That's Life," which he wrote with his psychiatrist.

A 2006 remake of the original with Steve Martin as Clouseau was modestly successful; its 2009 follow up was less so. Both had new directors, with Edwards credited as a writer.

He continued to supervise Andrews' career, which included a short-lived television series and her 1996 return to Broadway in a $8.5 million version of "Victor/Victoria." Edwards directed the show, which drew mixed reviews. When Andrews was the only one connected with the musical to be nominated for a Tony, she announced to a matinee audience that she was declining the nomination because her co-workers had been snubbed.

Andrews and Edwards married in 1968. She had a daughter, Emma, from her marriage to Broadway designer Tony Walton. Edwards had a daughter, Jennifer, and a son, Geoffrey, from his marriage to Patricia Edwards. He and Andrews adopted two Vietnamese children, Amy and Jo.

A longtime painter, Edwards began sculpting in mid-life, and his bronze works in the style of Henry Moore drew critical praise in shows in Los Angeles and Bucks County, Pa.

Edwards is survived by his wife, five children, seven grandchildren and two great grandchildren. His family says a private memorial is planned and a public memorial will be scheduled in the new year.