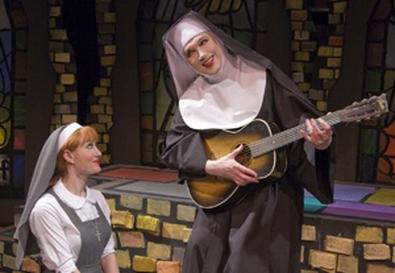 Photo Source: David Rodgers
Leave it to Charles Busch to find one more Hollywood genre to lampoon. As author and leading lady in drag, he's done historical epics ("Vampire Lesbians of Sodom"), summer surf silliness ("Psycho Beach Party"), tragic diva melodrama ("Die Mommie Die!"), exotic ventures to the Far East ("Shanghai Moon"), wartime espionage ("The Lady in Question"), and 1950s anti-Communist propaganda ("Red Scare on Sunset"). Where else could he go but into the convent? With "The Divine Sister," Busch satirizes American cinema's widely varied portrayal of nuns, from the good-natured gals of films like "The Trouble With Angels" and "The Bells of St. Mary's" to the tormented nut cases of "Agnes of God." There are tangential references to movies touching on spirituality—in their own weird way—such as "The Da Vinci Code" and "Suddenly, Last Summer," but the main thrust of Busch's wacky story is to showcase himself (naturally). As the spunky mother superior of a beleaguered convent school in 1966 Pittsburgh, Busch dons the requisite enfolding habit but remembers to lay on the false eyelashes and scarlet lipstick.

This mother is one tough cookie. Before taking her vows, she was Susan Appleyard, girl reporter, perhaps a nod to the fact that Rosalind Russell played both the top nun in "The Trouble With Angels" and a newshound in "His Girl Friday." Susan has had as shady a past as any Busch heroine: orphaned as a baby, an ill-fated love affair with a fellow reporter, and a vanished love child. Though enclosed by a wimple, Busch manages to manipulate his pliable features to create the Reverend Mother's hilarious reactions to the social upheavals of the 1960s. Watch as his upper lip curls into a sneer as she denounces atheists, adulterers, homosexuals, and the Dave Clark Five. Busch's script is his usual combination of high satire and low humor. Gags involving flatulence, urine stains, and fake vomiting are integrated with sharp barbs aimed at the Catholic Church and Hollywood's depiction of it. As headliner and author, Busch scores with a solid hit at the funny bone. This comes as a welcome relief after the misfire of his last play, the convoluted "The Third Story."

Though the author is the unquestioned star of the show, the remainder of the company—all veterans of previous Busch efforts—are each given ample opportunity to grab the comedy spotlight. Julie Halston is particularly delicious physicalizing the sexual frustrations of Sister Acacius, the wrestling coach and supervisor of novices. Alison Fraser wrings every last laugh from the exaggerated accents of the Teutonic Sister Walburga and the Scottish Mrs. MacDuffie, a washerwoman, both of whom are more than they seem. Amy Rutberg gives Agnes, the postulant possessed by visions and voices, an appropriately off-kilter spin. Jennifer Van Dyck creates two vibrantly different cartoon figures: the snobbish aristocrat Mrs. Levinson and Timothy, a young student just discovering his attraction for the school's star athlete. Jonathan Walker is the proverbial straight man, playing the Reverend Mother's former romantic interest with square-jawed virility, but he does get to cut loose a bit as a mysterious friar.

Director Carl Andress gives the proceedings the necessary crazed edge, and B.T. Whitehill's set makes efficient use of the tiny SoHo Playhouse stage and has numerous clever touches, such as a chandelier made of silverware in Mrs. Levinson's house. That's just one of the great gags that could make "The Divine Sister" a habit for theatergoers.