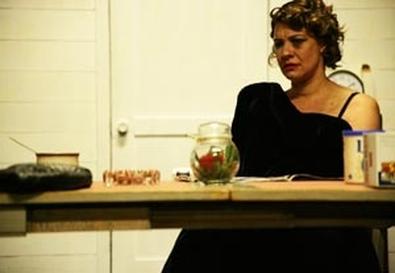 Photo Source: Shelli Wright
What we have in this 50-minute production is less a conventional play and more a slice of life presented as a conversation between two working-class sisters. Though the story is abbreviated, the script by playwright Edward Allan Baker is constructed so adroitly and the work is so telling that the spectator gets the sensation of being in the room with the two women—or at least of looking through a window at the lives of very dysfunctional neighbors. Although there is no overt violence, Baker manages to engender an acute awareness of how domestic abuse is perpetuated throughout the generations. Particularly noteworthy is his seamless injection of humor into the conversation's darker moments.

The action, set in Providence, R.I., takes us back to 1984. It is a Sunday afternoon, the only private time that Sandra (Bonnie Root) enjoys. She disconnects the kitchen phone and turns on music. Her peaceful interlude is disrupted when her sister, Dolores (Betsy Moore), bursts in, pleading for refuge. Dolores, obviously unstable, is fleeing her abusive husband. Sandra doesn't want to get involved and tells her to leave, but Dolores is persistent.

We learn that their father beat their mother, and their mother beat Dolores. She denies it at first, but Sandra finally admits that she is also an abused wife. Suddenly, Dolores is certain she hears her husband breaking into the house, and she pulls out a gun. What follows is somewhat unexpected but totally believable.

Under director Dominic Ottersbach's expert guidance the actors are totally immersed in their characters, and they effortlessly establish a sense of their sisterly bond beneath the tension permeating the atmosphere. Both have also nailed the regional accent, and each is an apparent counterpoint to the other. Moore, whose character comes across as a professional victim, communicates a genuine neediness and desperation simmering under the surface. Root exhibits a more stable demeanor but slowly and poignantly reveals her character's suppressed anguish. On this occasion the evening concluded too quickly.