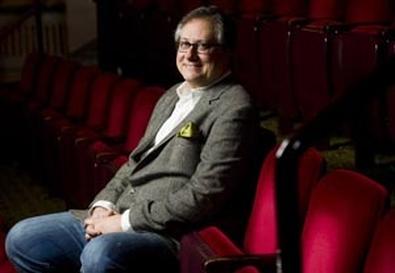 "Neil Simon had four. Where are my other two? C'mon. I'm here to break records. I'm not here to do art," says the playwright, matter-of-factly. "I used to care about the process of creating art. Now it's all about the tally sheet at the end of the day."

Then he smiles slyly, unable to keep up the ruse.

To meet Beane is to laugh a lot — his dialogue is littered with a wonderful mix of witty, arch and sarcastic humor that recalls the lost era of Dorothy Parker and the Algonquin Round Table. He drops bon mots the way regular people drop crumbs.

"He has something witty to say about everything," says director and choreographer Dan Knechtges, who has worked with Beane twice. "He is always on. If you give him an inch he takes a mile with the joke."

These days are good ones for Beane. "Sister Act," one of the musicals he helped write, has been playing for more than 250 performances on Broadway, and he's about to watch his new offering "Lysistrata Jones" open a few blocks away. In the pipeline for the next Broadway season is a play — "The Nance" with Nathan Lane — and another, still hush-hush musical.

He both recognizes his good fortune and laughs at it. "I have very important phone messages that will be playing Broadway," he says, cracking up. "An evening of my tweets I think is going to be booked into the Golden Theatre."

At a Times Square restaurant for an interview, he orders green tea but isn't interested in food. The waiter wonders if he should take away the menu. "Leave it," Beane says. "You never know. I have violent mood swings."

Beane, whose play "The Little Dog Laughed" earned a Tony nomination and who also wrote the cult movie "To Wong Foo, Thanks for Everything! Julie Newmar," has just come from the Walter Kerr Theatre, where he is still tinkering with his crafty updating of Aristophanes' play "Lysistrata." Beane has taken the 2,400-year-old comedy about Athenian women withholding sex until their men stop fighting and plopped it to present day Athens College, where the basketball team hasn't won in decades.

He wrote it with his real-life partner, composer and lyricist Lewis Flinn, who gave the 411 B.C. story a pulsing, extremely hummable and contemporary soundtrack. Beane's book is classically structured — in honor of the Greeks — but he updates a line every week.

"Whatever the news item of that week is, there's one place in the show where I change the line," he explains. "I wanted to have that sense of freshness, to remind people the beauty of live theater is you never know what they're going to say next."

The musical has been gestating for 10 years and has traveled from a theater in Dallas to a gym in Greenwich Village. It has its origins on a terrible day — Sept. 12, 2001. Beane and Flinn had only recently met.

"On our fifth date we were on a roof watching helicopters, smelling burning rubber, going, 'What's going on here? Let's write something positive. Let's write about positive change and something good,'" he says. "That's how we started writing it."

Initially, Beane thought he would update the story to a college football field. But Flinn worried that football helmets might make the singers' faces hard to see. So Beane, who confesses he's not a sports nut, switched to basketball and consulted with his brother-in-law, a big University of North Carolina fan. He wanted to know why college basketball inspires such passion and got a very Greek answer: "He told me, 'It's so mortal. The NBA is more immortal.'"

Beane, 52, jumped into the research, but worked on the script intermittently over the years. In the final version, Beane says he kept in two Aristophanes-era jokes. "So when the audience laughs, I go, '411 B.C. still works! Still works.'"

He had already written a rough draft of "Lysistrata Jones" when he was approached to update the script of the Olivia Newton-John movie "Xanadu." He almost turned it down since he already had a Greek story in the pipeline.

So he asked friend and playwright Wendy Wasserstein for advice. "She goes, 'Just tell everybody it's a trilogy and they'll be waiting for the third part.' I thought, 'That's the smartest advice ever,'" he says. "So 20 years from now I'll come up with something and be like, 'The trilogy is complete at last.'"

Beane has seen his demand as a script doctor skyrocket lately, in part because he is widely credited with getting "Sister Act" — based on the film starring Whoopi Goldberg, now a producer of the show — ready for its New York run following a London stand.

Building on a book by Cheri and Bill Steinkellner and working around songs by Alan Menken and Glenn Slater, Beane feverishly wrote new material for the Broadway show. So crazed was the process that his typist — Paul Downs Colaizzo — became credited as an associate writer. Beane's script was nominated for a best musical Tony and his version is now touring the U.K.

Asked if he's now considered a go-to show savior, Beane smiles. "I'm called in for shows all the time," he says, and looks down at his phone. "Someone just called me who has a musical based on the music of someone I just had to Google. I actually had to say to the agent, 'I will Google him and get back to you.'"

Beane, who was raised in Wyomissing, Pa., says his humor and style were influenced by such writers as Parker, George Kaufman, James Thurber, Mark Twain and Noel Coward. Their works sustained him as a young man.

"If you go to the Wyomissing Public Library and pull up the files from 1976 to 1977, you will see 'D. Beane' took out all of these books. There is not one that was left behind," he says. "I just devoured them."

While people often know Beane for his humor — his addition of a couple of antiques dealers to "Sister Act" was stroke of comic genius — his work always has depth and poignancy. The message of "Xanadu," even amid all the roller-skating silliness, was that art is still important. "Sister Act," for all the camp fun, reminds us to respect other points of view.

"My favorite moments are the moments everyone cries over," he says. "I see people in the audience crying and I go, 'I did that, too. I don't just do the jokes. I also do the cries.' Jokes and cries, jokes and cries. That's all I'm here for, people."