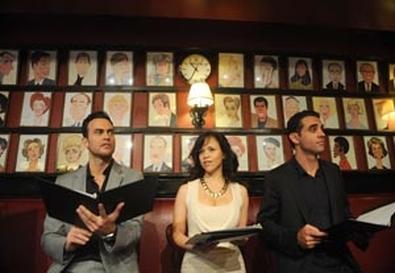 Photo Source: Getty Images
The nominees for the 75th annual Drama League Awards were announced April 21 by Bobby Canavale, Cheyenne Jackson, and Rosie Perez. The awards will be presented in a gala luncheon on May 15 at the Marriott Marquis Hotel. The event will be hosted by Jeremy Irons, currently starring in Impressionism, and Cynthia Nixon, currently in starring in Distracted. In addition, special awards will be presented to Elton John for distinguished achievement in musical theatre; Arthur Laurents who will receive the Julia Hansen Award for excellence in direction, Angela Lansbury for unique contribution to the theatre; and producer Herb Blodgett who will be presented with the Drama League's 75th Anniversary Leadership Award.

The award for distinguished performance will be announced at the luncheon and will be go to one of over 70 nominees from among the actors in this season's productions on and Off-Broadway.

The Broadway transfers of [title of show], Dividing the Estate, and Next to Normal were considered for Drama League Awards during their Off-Broadway runs. The League was founded in 1916 as an association of theatre professionals and patrons and has developed into one of the theatre's premiere service organizations.

The nominees are as follows:

Distinguished Production of a Play
33 Variations - by Moises Kaufman
Black Watch - by Gregory Burke
Chair - by Edward Bond
God of Carnage - by Yasmina Reza
If You See Something, Say Something - by Mike Daisey
Lady - by Craig Wright
reasons to be pretty - by Neil LaBute
Ruined - by Lynn Nottage
Shipwrecked! An Entertainment: The Amazing Adventures of Louis de Rougemont (As Told by Himself) - by Donald Margulies
Why Torture Is Wrong, and the People Who Love Them - by Christopher Durang
Wig Out! - by Tarell Alvin McCraney