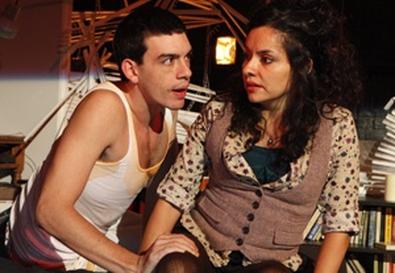 Photo Source: Richard Termine
Writing is often a subject of great interest—to writers. To a general audience, not so much. Unless it's a scandalous roman à clef, the public usually doesn't care about the minutiae of a book's inspiration or the writer's process. Unfortunately, Gonzalo Rodriguez Risco's 85-minute play "Dramatis Personae" consists of too much talk about writing and not enough action of any sort. This despite its backdrop: the riots in Peru that led to a coup in the early 1990s. And "backdrop" is the operative word. The three writer characters meet regularly in an apartment with a smashed-picture-window view of the explosions and gunfire in the streets of Lima, but gunfire into the apartment miraculously never touches them, nor does the raging revolution outside really figure into their much-discussed work.

No, Lucas (Felix Solis), Ben (Gerardo Rodriguez), and Marla (Liza Fernandez) seem solely concerned with their muses. Marla wants to get back at her ex-husband by having her proposed wife character kill her own husband brutally. Ben is overtaken by the puerile sexual fantasy he got from graffiti in a public bathroom. Lucas, the one established author, can only keep rewriting—at least in his head—his bestseller of five years ago, based on the death of his younger brother at 18, a death Lucas may have hastened. Sometimes the trio's musings are directed at one another, sometimes at the audience, and often seemingly at themselves. Fernandez conveys believable if unexplained rage, and Rodriguez's Ben effuses boyish enthusiasm for a premise no one else could love. But Solis, with the meatiest inspiration, sometimes underplays his character out of existence.

The play comes to life only in the persons of the muses. Laura Esposito effectively portrays three of them, including the murderous wife. Bobby Moreno is especially touching and funny as three more, including the deceased brother, Marc. He also has the best line in the play. When Lucas asks Marc why he's still around, Marc says, "Because you keep bringing me back…. Using me. My death. Your guilt. I'm like fiction fuel."

Presented by the Playwrights Realm