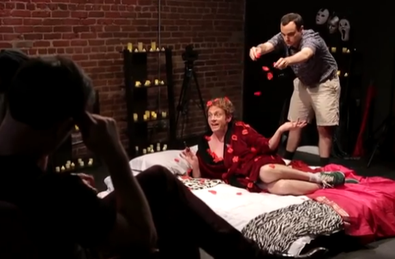 “Jesus Christ, how old are you?” the acting teacher in new comedy Web series “Hollywood Acting Studio” asks a student. “Well, technically I’m 43,” she begins before he cuts her off by screaming, “Get the fuck out of my face!”

That acting teacher is played with frenzied commitment by comedy’s secret weapon, Drew Droege, a bona fide Internet star from his viral Chloe Sevigny videos who parlayed that series’ success into bigger and better opportunities. Created by brothers Will and Daniel Vincent Gordh and Kevin Best, “Hollywood Acting Studio” is about a fictional acting class that focuses on a Hollywood blockbuster performance style—which is so rife for satirization that it’s surprising the idea hasn’t been done yet. We spoke to Droege about the series, debuting Sept. 10 on Starz' YouTube channel Union Pool, and why creating your own work should be mandatory for all performers.

This series must have let you all work through some issues, right?
It’s so cathartic for me! My character is based on everyone I’ve ever studied with at different times. We all have had those completely crazy, delusional, bitter teachers. Who weirdly name drops and still wants to be in the middle of everything but is way more comfortable in his own miserable bubble. But what’s so funny to me about the show is the students just go with him, which is what we all do! When I think about what I’ve done in class… I rolled around on the floor and pretended to be plankton for two hours! Because you can’t go to that place of judgment during class. So you end up being plankton.

I imagine the pre-production was like the one for “A Chorus Line,” where you all just sat around and traded horror stories.
Well, Dan Gordh was a student of mine and recommended me, which always makes me laugh. I got the job as a terrible teacher from a former student. We all sat down after I read the first couple of episodes and I was like, “Absolutely, I want to do this!” And we got coffee and then we traded a bunch of stories. And while we were shooting, we all improvised a lot. We found new stuff and things would come to me because I have years of trauma from being in the acting classroom.

One of my most vivid memories from college was an acting teacher telling a classmate doing a scene from a Tennessee Williams play, “Pretend you just got in from Alaska and you have whale blubber stuck in your teeth.”
Really?
Yes!
It’s such a funny thing. In all the art forms, there is an ideal. But in acting, there’s not really a standard. Everyone does it differently, and some people with so much training are terrible and some people with no training are amazing. And people complicate it so much. With dance or music, you can tell who was off. But in acting, it’s so subjective and it invites on both sides some incredibly creative people. But it also invites these charlatans who say they know how to create a good performance. And they just complicate everything and ruin it with whale blubber.

Meanwhile, you’ve been on the forefront of Web series with Chloe. Were you always creating your own work?
Chloe was such a phenomenon because I had been doing that on stage for years before I did the videos. But my friend pressured me into making these into videos and I remember thinking, I just don’t know if there’s much to this weird Chloe Sevigny impression that’s not even an impression. And we finally made the videos and about three months after the first three went up, they took off and became a huge thing. And of course I was kicking myself for not doing that years earlier! But I worked with the Groundlings and Upright Citizens Brigade, and those places encourage you to create your own material.

It’s great if you’re a type and you get cast a lot, but that’s not going to build a career and you’re more than that. And honestly, I wasn’t really working because I was getting so many people saying, “We think you’re great but we don’t know what to do with you.” And you have to look at that as a good thing, or you get horribly depressed. Say, “Great, there’s no one like me!” And because there’s no one like you, you have to create your own part. With the Chloe thing, I got all this work because it put me in front of so many people. It’s ultimately how I got “Hollywood Acting Studio,” because they liked those videos and they liked my energy. And the same thing happened for them! They did their own videos and Starz came to them and said, “We love you guys and want you to do something.”

I teach improv and I tell students, “You have the Internet. Make your own stuff and put it out there.” You have to be active in the whole thing; you can’t just be a lump of clay. Be creative and realize you bring a lot more to it. And in terms of getting work, it’s better to just generate your own work even if you’re making no money. At least you feel as if you’re working and you’re getting better by doing it.