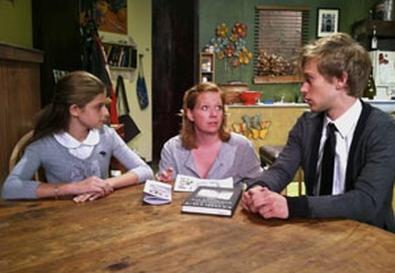 Photo Source: Jessie Warner
Though the plot of Marja-Lewis Ryan's dramedy suggests we might be headed for Lifetime TV movie territory, the touching new play proves fresh and invigorating. In this tale of a suburban housewife who abruptly announces her lesbianism, director Anthony Frisina elicits sensitive work from a finely calibrated ensemble, while a handsome production design (set by Michael Fitzgerald, lighting by Leigh Allen) evokes an appealing kitchen-sink credibility. The perfection of this spick-and-span domicile tellingly contrasts with the emotional disarray of the family inhabiting it.

The story begins during preparations for a Thanksgiving dinner, as matriarch Mary (Heidi Sulzman) is battling a nagging sense of ennui. The husband (Monroe Makowsky) of Mary's close friend Carol (Jessie Warner) brings along his daughter from a prior marriage, 21-year-old lesbian Sam (Ryan, in a smart and engaging portrayal), and Mary feels compelled to talk to the girl privately. This leads to Mary's decision to come out of the closet to the family. Her husband, Henry (Trevor H. Olsen), reacts with barely controlled rage, and he soon moves out. Restless and trouble-prone teenager John (the splendid Ryan Stathos) is torn—caring about his mother but angry because her revelation disrupts the family. His young sister Jodi (the terrific Isabella Palmieri) has an amazingly mature reaction. To the playwright's credit, the script convincingly incorporates other family issues, which prevents Mary's plight from being the sole reason for the domestic discord. For example, Henry is emotionally distant even before Mary's announcement. Olsen conveys this character's complexities in a subtly powerful performance.

The supportive relationship between Mary and Carol becomes a welcome catalyst in leavening Mary's despair. Warner is crisply funny as a woman dealing with her own marital issues: her current extramarital affair and that of her husband. Sulzman infuses the play's focal role with grace, vulnerability, and wit in a multidimensional portrayal that consistently rings true.

Following a recent string of plays touching on gay marriage, this portrait of late-blooming lesbianism offers a different yet equally poignant perspective on challenges faced by gay people who yearn for a fulfilling domestic life.