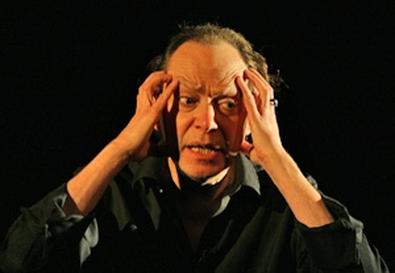 Photo Source: Dixie Sheridan
This is Back Stage's review of the show's original run at 1 Sheridan Square in November 2008.

If you want to tell a New York City ghost story, you'll probably want to set it somewhere between 14th and Delancey streets. Nowhere do the lines between legend and history, living and haunting, so noticeably blur as in the winding pathways of the East and West villages. And once you find your ghost story, you'll want Edgar Oliver to tell it.

In "East 10th Street: Self Portrait With Empty House," Oliver, a veteran downtown performer and playwright, maps out the interior of the apartment building where he has rented a small room, at a starting price of $16 a week, for his entire New York life, along with his sister Helen. He recalls a former wet nurse who treats a pile of rags like jewels, a former postman who tries to murder the nurse with pesticide, and a pair of "lunatics" who make life interesting but treacherous for the young siblings.

In another artist's hands, these characters would be objects of ridicule, another series of crazy Manhattan apartment stories. But for Oliver, their remembrance is his destiny and in its own way an act of love. He is like Jonathan Harker 30 years after the events of "Dracula," visibly changed by the story he continues to tell. With his scraggly fingers, wide eyes, and affected, melodic voice, Oliver is a ghost himself. That he enters out of nowhere from the back of a black stage and is lit almost entirely from below (think holding up a flashlight to your face in the dark) only adds to the atmosphere of séance. Director Randy Sharp inserts sound effects to illustrate the occasional story, but they're unnecessary—anything beyond the storyteller's bewitching presence is a distraction.

As the monologue ends, Oliver settles into a life of wandering through the boroughs, attracted to abandoned roads that mark "the ultimate end of thing." Without warning, he dissolves into the blackness from whence he came, and we in the audience, re-entering Sheridan Square during a brisk Manhattan autumn, are left with our own story to tell.