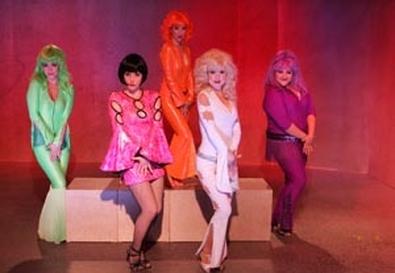 Photo Source: Michael Lamont
Librettist-songwriter S. Claus' tuner is billed as "a groovy '70s musical." In this premiere rendition, the score, production design, choreography, and overall sensibility indeed evoke the high-spirited era of The Partridge Family, disco fever, and psychedelic revelry, and the show feels like a stylistic descendant of Hair, The Rocky Horror Show, and other vintage rock musicals. Yet the book's references to such post-1980 issues as AIDS make its setting nebulous. The framing story takes place on an L.A. university campus, and the action quickly segues to a dream dimension recalling The Wizard of Oz, re-imagined as a sexual wonderland. This all adds up to quite a hodgepodge. The meandering narrative struggles to make its point about the importance of sexual freedom, and the subtext vaguely evokes the ongoing gay-liberation movement. The key to enjoying this scattershot concoction is throwing logic out the window. Settle for savoring the zesty songs, director-choreographer Kay Cole's ebullient dance numbers, and the vibrant efforts of a talented ensemble.

Nerdy campus bookworm Tom (Meyer DeLeeuw) longs for a romance with bespectacled and unglamorous co-ed Angel (Lisa Marinacci). She's better prepared than he is to cast shyness aside and consummate a relationship. Virginal Tom is petrified of taking that leap. When Angel sings "Follow Me," Tom suddenly finds himself transported to a bizarre hedonistic universe called Ecstasy, presided over by a sexy queen (Marinacci as a much different incarnation of Angel). Tangential story elements involve a brassy hooker (Dina Buglione), an evil moral-watchdog organization, a high-strung escapee from that group (Patrick Hancock), and a diva, Black Widow (Gina D'Acciaro). Few of the songs advance the story, and the labyrinth of diffuse episodes culminates in a rushed and contrived climax.