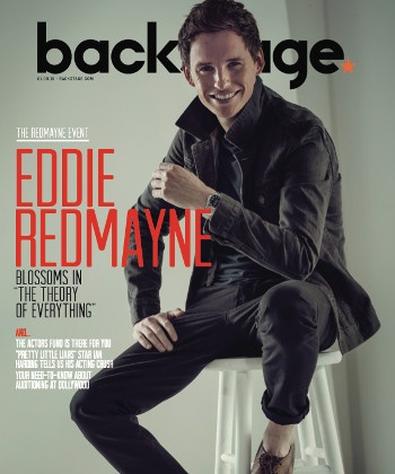 Eddie Redmayne is dancing like no one’s watching to a Pink song in a dazzlingly white downtown L.A. photo studio. “I have a slightly embarrassing penchant for slightly angsty songs.” He laughs, still dancing. “I realized it when I worked with Chloë [Grace] Moretz [in 2011’s ‘Hick’].”

Redmayne should savor the moment, because opportunities to let down his tousled brown mop of hair are diminishing rapidly as larger audiences discover “The Theory of Everything,” the Stephen Hawking biopic anchored by Redmayne’s transformative performance as the British physicist and cosmologist. With award nominations cascading in, too, his days of comparative anonymity are definitively behind him.

Redmayne has already secured Golden Globe, Screen Actors Guild, and Critics’ Choice awards nominations, to name a very few in his crowded playbook. Next up, almost inevitably, is an Academy Awards nod for best actor, a category that pundits consider a two-horse race between Redmayne and Michael Keaton for “Birdman.” Should Redmayne prevail on the night, no one will be surprised except the man himself, who seems winningly delighted—not with his own across-the-board, well-deserved, rabid acclaim, but at the prospect of persuading more people to watch. For Redmayne, this is extremely personal. 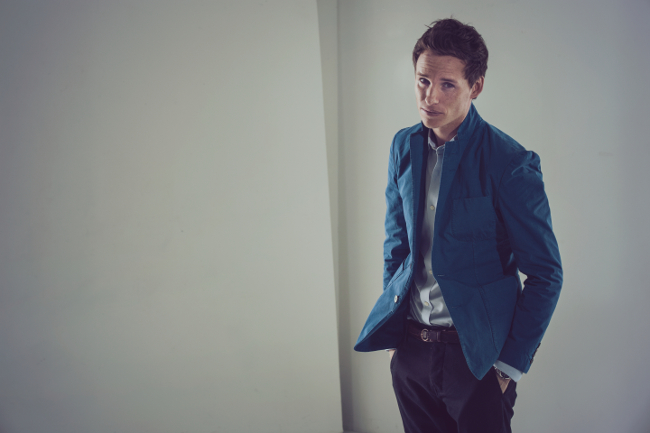 “The fact that people seem to be enthused by it means the world because we need to get people in to see the film,” he says. “Stephen’s story is important. Anything else that comes from this seems to be a wonderful thing, and of course the idea of people recognizing the work you put in does mean a lot.”

He laughs hard, recalling the moment he was cast, in a London pub with director James Marsh. “He was wired on coffee and I was drunk. Plus, I never auditioned. Being cast without auditioning is a weird one for actors. In some ways it’s a dream, but if you have a bit of self-doubt, which most of us do, you think, What if I turn up on day one, open my mouth, and they say, ‘You’re not going to do it like that, are you?’ In some sense you want to audition because [then] you’ve shown the people in charge some sense of what you’re going to do. Also, I suddenly knew the stakes—because he’s an icon and everyone has an opinion on him. On so many levels, it felt impossible. It was like you couldn’t help but mess it up.”

Critical to Redmayne’s preparation, in addition to the hours of footage and Hawking documentaries he “felt obligated” to watch, was meeting other ALS patients. “I met 30 or 40 families. One gentleman had almost choked the night before, literally almost died. The next morning he said, in genuine humor, ‘I wonder what death-defying act I can do today,’ ” Redmayne recalls. “With Stephen, too, the wit, humor, and timing were just immaculate. This idea of him always finding the front foot, the humor, was the last thing in all the work we were doing. It became about always finding the glint in each moment.” Some days that was harder than others, when Redmayne was portraying an older Hawking with the help of prosthetics. “I so admire those actors who work with prosthetics. You’ve been in there so long before you even arrive on set that by the time you do, you’re kind of ready to go home. There really is a quality of meditation involved in doing good prosthetic work, I think.”

Asked if there was one scene more difficult than the rest—a challenging question, given that Redmayne required the services of an osteopath to monitor the physical changes his body underwent as a result of being unnaturally contorted for long periods of time—Redmayne speaks of days when the first scene filmed found Hawking still physically able, then a later scene had him walking on crutches, before the day ended with Redmayne in a wheelchair.

“But the hardest scene, I suppose,” he adds, “was the one when he and Jane part—starting in a lovely place and finishing at a distraught place for both of them. It was definitely grueling for us, with another take and another take, because the scene was so long. James was so sensitive with how it was shot, though, and not having the cameras in our faces.”

Actors with academic training are schooled for such moments but Redmayne, unlike the majority of his British contemporaries, has no formal drama education. “You constantly feel like a fraud, not having a piece of paper saying you graduated from somewhere,” he says, despite his University of Cambridge history of art degree. “But the thing about having not trained is that the insecurity means you listen and try to be a sponge and learn by osmosis. The thing I’ve been so lucky about, pretty much from the word ‘Go,’ is working with amazing actors and being able to glean from them not just how to work but how to behave. I’m not sure if it really works, though!” Clearly it does. Redmayne won Olivier and Tony awards in 2010 for his supporting turn in John Logan’s acclaimed play “Red” as the assistant to painter Mark Rothko (Alfred Molina), not to mention attention from fans for his heartbreaking performance in “Les Misérables” opposite Hugh Jackman in 2012. 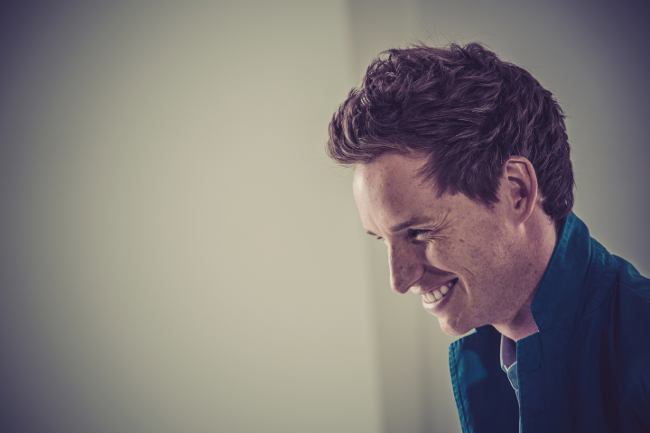 Part of the comfort Redmayne found on the “Theory of Everything” set came from the collaborative environment fostered by Marsh. “It did feel like theater again,” Redmayne says. “I do remember James asking, ‘How would you go about this?’ I invented something on the spot that sounded like an assured technique, but I did have a weird instinct right away that it was going to be about surrounding yourself with a team of people. That team ended up being the choreographer, the makeup designer, the costume designer, and the cinematographer. My instinct immediately was that everything would affect everything else, if you were in the wrong costume, for example. People talk about the word ‘collaboration,’ but it really felt true here.”

Not least of all with Felicity Jones, an acquaintance if not a close friend prior to the production. “You go to a level that’s pretty close to the bone with someone and you really have to know you can trust each other,” Redmayne says. “We only had a week or two to get up to speed together and really, this relationship between sufferer and carer becomes an extension of you and your physicality. But we were able to get to 70 or 80 miles an hour very quickly.”

Offscreen too, Redmayne had unending female support in the shape of his now-wife, Hannah Bagshawe. “She’d been much closer to the process than ever before because I was getting the rushes every day. That never normally happens but I needed to be able to see where I was with the physicality and what was working,” Redmayne says. “But yes, it was a tough gig, and she was so supportive and invested in it when I was broken and knackered. I’m normally good at jumping out of a part, but I haven’t worked since. This one took me a while to clear, in both the physicality and head space. Hannah really helped me let it all go.”